By Bennett ColesPublished On: May 19, 2021Categories: Star Wars Characters0 Comments

The Star Wars universe has its share of scum and villainy. These scoundrels are fun, and sometimes throwaway details from the feature films explode in the TV shows into fan favorites.

We Meet Aurra in a Podrace?

If you’ve only seen the movies, you’ve actually seen Sing but if you blinked you might have missed her.

A cameo in Phantom Menace…

She’s that tall, slender, chalk-skinned figure with the top-knot and huge rifle watching the Boonta Eve Classic podrace on Tatooine. Sing gets about a second of screen time – just long enough to see her and go, “oh, that’s a neat-looking character.” And that’s all George Lucas intended, so… mission accomplished!

But of course Dave Filoni and the folks at Clone Wars are known to explore minor appearances in the movies and bring those characters to life.

Aurra Sing slinks onto the screen with a ruthless attitude, a deadly shot and a love for killing that never softens. While some Star Wars scoundrels have complexity and a few redeeming qualities, Sing is brutal and straightforward. And we love every appearance she makes. 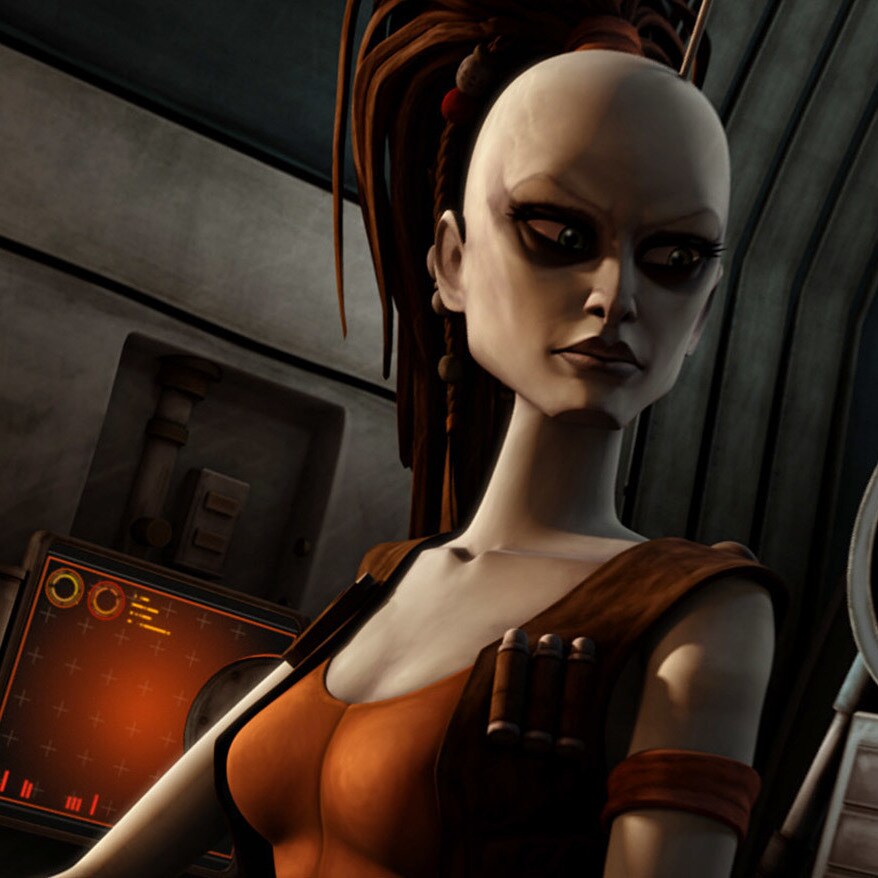 The Dark, the Light, and Those (Like Aurra) Who Just Don’t Care

Non-canon sources tell us that Aurra Sing was born on Nar Shaddaa to a Spice-addicted mother and absent father. Despite her difficult early years she avoided death and the slave markets and fate would even had a surprise in store.

Is Aurra Sing a Jedi?

While not discussed anywhere in The Clone Wars, rumor from books has it that Aurra Sing came to the Jedi Temple as a youngling. She wasn’t a very good student, though, and despite many efforts she was eventually dismissed from Jedi training for being too aggressive.

(You have to question the “wisdom” of the late-Republic Jedi Order. So they have this youngling, who has no family to return to, and who’s struggling with anger issues. They’ve trained her to the point where she has some control of the Force, but she’s considered unsuitable for the rank of padawan. Gee, what could possibly go wrong with tossing her out of the Order and leaving her to fend for herself in a violent, unforgiving galaxy…?)

No, to their endless regret

It’s no surprise that Aurra Sing grew up to be an assassin and bounty hunter. I hope that there was an article in Jedi Monthly, advising masters to follow the recent series of guidelines on alienated former padawans and the related problems that can emerge.

Young Aurra did eventually find her way, hooking up with Jango Fett and learning the trade. A fearsome reputation let her work with famous bounty hunters and rogues like Cad Bane, Bossk, Hondo Ohnaka, Tobias Beckett and Darth Maul.

We first see Sing in The Clone Wars series when we also meet the young Boba Fett. Boba has infiltrated the clone training system and is posing as a cadet, eager to exact revenge on Jedi Mace Windu for having killed his father Jango. The plan doesn’t quite work out as expected, but Sing arrives in Slave I to pull Boba back out of the mess.

Credit to voice actress Jaime King, who brings Aurra Sing to life in Star Wars: The Clone Wars. The character’s voice delivers surprising depth when compared to her fearsome appearance. We can tell that Aurra isn’t pure evil, but just a person dealt a bad hand in life. She has some genuine affection for young Boba Fett, even though she’ll betray him in a heartbeat to save her own skin.

It’s fun to follow Aurra through the Clone Wars story as she brandishes awesome weapons and deals out death with cold precision. She’s a popular character and we can enjoy a certain guilty pleasure in watching her smack down Bossk and even stand up to Cad Bane. She’s come a long way from her cameo in Phantom Menace and she’s a welcome addition to Clone Wars.

Still, she never develops much beyond how she’s introduced. She’s an assassin with no regret for those she’s killed. She actively tries to kill Anakin Skywalker and Mace Windu, and has no qualms attempting to assassinate Padme Amidala. Her fall from the old Jedi ways is clear.

Aurra’s Expanded Story in the Movies

So what happens to Aurra Sing – where does her story go? Details are sketchy, but we can assume that she continues to associate with bounty hunters and take kill jobs.

Solo: A Star Wars Story, introduces us to Tobias Beckett, another scoundrel known for his questionable deeds and code of ethics. And we learn Aurra’s fate in a surprisingly offhand way.

How did Aurra Sing die?

Beckett meets Lando Calrissian in a seedy galactic watering hole, and Lando thanks Beckett for killing Aurra. Beckett shrugs and replies with:

“Pushed her. Pretty sure the fall killed her.“

It’s a neat moment, and a cool Easter egg for fans, but kind of a lame way for us to learn of her death. Aurra was the genuine article for badassery and it would have been a great moment to see her finally taken down.

A fitting end for Aurra Sing

But perhaps it’s more appropriate this way. Aurra Sing cared nothing for the greater good or evil in the galaxy. To be pushed to an inglorious death by a cad who cared nothing for her sounds about right. It’s cold, but it’s a hint of the more mature Star Wars that many of us long to see.