Captain Phasma: One of the Coolest Villains We Know Nothing About

When Star Wars Episode VII: The Force Awakens was first announced by Lucasfilm Ltd, the fan base lost its collective mind, and from first looks, there was a lot to be excited about. One of the most interesting new characters was Captain Phasma, her towering figure and distinctive armor immediately catching the attention of fans. The fact that this new character was being played by Gwendoline Christie just made things even more intriguing. 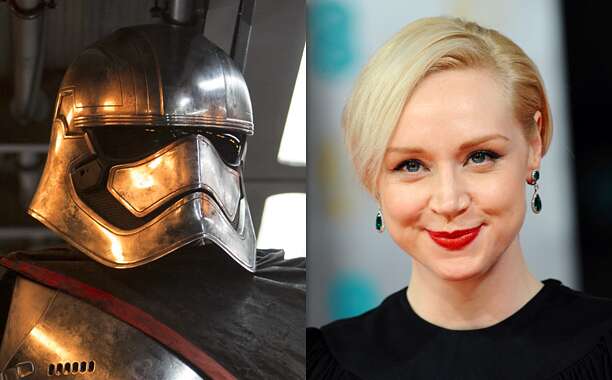 But even after two full films, many viewers felt like they knew nothing about this mysterious First Order commander, and there was a sense that Captain Phasma represented an opportunity lost. There is, in fact, a lot of canon information available about her, but you have to look beyond the movies to the Star Wars novels and comics to learn it.

What is canon these days, anyway?

Okay, you might say, that’s great – except I don’t read the Star Wars novels and comic books. And are they really canon, anyway? Well, in the new Disney Star Wars, the films and TV shows aren’t the only source of canon: the books and comics are increasingly important for filling in the details… But, only the books and comics published since The Force Awakens hit theatres are considered “real” anymore. So anything that says “Legends” on the cover isn’t canon. But don’t worry – anything with Captain Phasma is from the new canon, so we’re good.

But from film and print, what do we know about this tough, veteran commander?

Captain Phasma at the movies

First of all, let’s take a look at what the movies told us. Film can communicate a startling amount of info in a very short time, and even if you’re a film-only kind of fan, Captain Phasma is hardly a complete unknown. 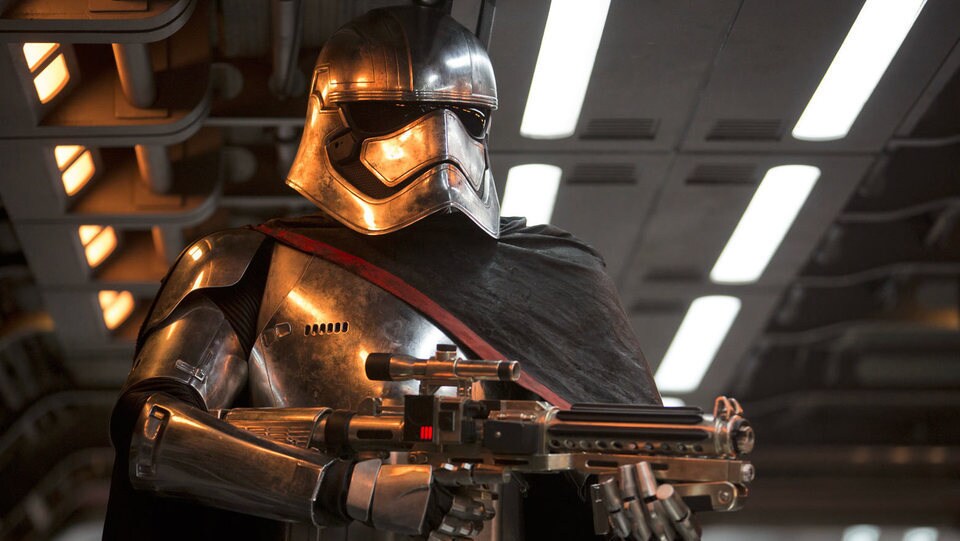 Star Wars: The Force Awakens opened with a bang

The opening scene of Force Awakens gives us a chilling sense of the new evil in the galaxy, as the First Order’s stormtroopers charge down on a defenseless village. When Captain Phasma first appeared, flames flickering off her armor, there was no doubt who was in charge of these troops. Kylo Ren may have been the architect of the violence – and his awesome control of the Force was on full display – but it was clear who commanded the troops. When Phasma ordered the slaughter of civilians without hesitation, we knew she was going to be a badass villain.

Back with the First Order fleet, we saw how FN-2187 (later Finn) obeyed Phasma without question, and this sort of immediate obedience from her troops tracks through both Force Awakens and Last Jedi. Phasma has no qualms about sending her troops into battle, and as we see in Last Jedi she leads from the front. She displays a no-nonsense fighting style, choosing brutal efficiency over cool moves. Accomplishing the mission ranks as her highest priority – what anybody thinks of her is a distant second. 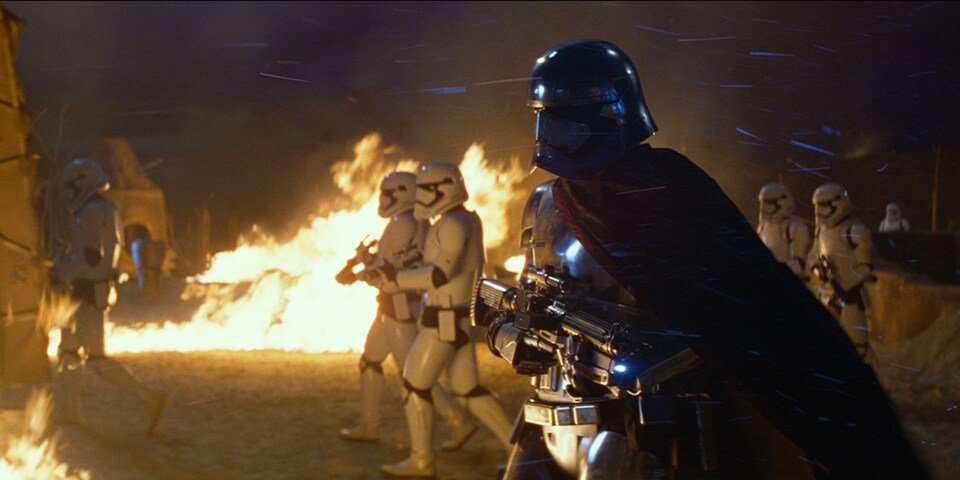 Was Phasma weak, or just opportunistic?

There’s one odd Phasma scene on Starkiller Base, however, that may leave us searching for answers. She’s captured by Finn, Han and Chewie with remarkable ease, and she apparently puts up no resistance to their demand that she lower the shields. This seems rather out of character for her – surely she could have fought back as soon as they pulled a blaster on her, trusting her armor to take a few hits while she dished out a smackdown. And surely she wouldn’t risk Starkiller Base just to save her own life.

Well, apparently she would. So what does this tell us about Captain Phasma? The woman certainly isn’t weak, and seems perfectly capable of risking her life in battle… so what was Phasma’s angle here? I realize that this sequence was required to solve a plot problem in very little screen time, and it was genuinely funny thanks to the comic chops of John Boyega and Harrison Ford (the trash compactor was the perfect punchline), but now it’s out there and it needs to be explained.

Was Phasma prepared for what the First Order required of her?

Maybe Phasma is a self-serving opportunist. She’s happy to kill villagers because she has all the power in the situation. She’s confident marching into battle on Supreme Leader Snoke’s ship because she has a legion of stormtroopers behind her. But when she’s cornered and outnumbered by her enemy, maybe she’s only too willing to cut a deal to save herself. It’s not what we’d expect based on her character’s set-up to that point… But maybe Phasma is more dedicated to herself than to the First Order, and while she requires unswerving loyalty from her troopers she has none herself.

The Finn-Solo-Phasma scene is mostly glossed over because of its comedic value, but it might be a sign of something less savory. Phasma’s loyalty wasn’t to the First Order, or Kylo Ren, or General Hux, but to herself. How else do we account for her apparent weakness?

We know that Phasma died in Star Wars: The Last Jedi, and since we’re unable to find out more about her in the movies, we’re forced to search the world of books and comics to learn more. And wow, is there more to learn – and wow, does it contradict what we see in the films.

First of all, there’s the five-part graphic novel series Captain Phasma, by Kelly Thompson and Marco Checchetto, that explains how she escaped the destruction of Starkiller Base and how she covered up the fact that it was in fact her who let a group of Resistance spies take down the shields and cripple the power regulator. This series helps to revitalize Phasma’s image of the tough First Order soldier, but it almost seems like an admission that her character was done a disservice by the movie.

In the stand-alone novel Phasma by Delilah S. Dawson, we finally see Phasma’s backstory and witness her journey from childhood to command. Phasma was born on Parnassos in the Unknown Regions of the galaxy, where commercial exploitation had ravaged the eco-system and survival was far from certain. Phasma betrayed her parents to a rival clan, then betrayed her older brother to help some First Order soldiers escape. Phasma served in the personal guard of the father of General Hux, only to murder the father when the son made her a better offer.

Her favorite method of assassination is to use the Parnassos beetle, where the bite causes the victim to swell up from within and explode, leaving behind only hair, translucent bones and shriveled organs. If Lucasfilm Ltd ever wanted to make kids cry watching a movie, showing that on screen would probably do it!

Okay, so wow – in the books she ranks as almost a super-villain. She’s vicious and bloodthirsty, even more so than Darth Vader on a bad day, and we can see more clearly why every command she gives is followed without question. The First Order itself is a nastier, less mature organization than the Empire, and the Captain Phasma from print matches this image.

Will we see Captain Phasma again?

The frantic battle between Finn and Phasma in Star Wars: The Last Jedi looked pretty definitive – Phasma fell into an up-rushing wave of flames as the ship broke apart around them. The assumption is that she perished, but… To quote Luke Skywalker, “No-one’s ever really gone.” Phasma somehow survived the destruction of Starkiller Base – who’s to say she didn’t create an escape route from Snoke’s ship?

And if Star Wars precedent is any sign, a villain’s journey doesn’t have to end with their death. Emperor Palpatine, Darth Maul and Boba Fett have all returned after their (pretty clear) on-screen demises, so if Phasma continues to be a popular character, my money would be on some kind of return for her.

The conclusion of The Rise of Skywalker honestly isn’t clear, and there’s no certainty that the First Order is finished as the credits roll. Is the Resistance going to offer some kind of peace treaty to the surviving First Order commanders? How will they even be able to account for all the First Order agents scattered across the galaxy?

The future of Captain Phasma

And does Phasma even care about the First Order? Both film and print suggest that she’s a survivor interested only in herself, and if she abandoned her armor and wore a different costume the Resistance would never even recognize her. She might even search for some remote Resistance-controlled site, hoping to secretly join whoever held the upper hand in the galaxy.

At present there’s no stated intention for Star Wars to extend beyond Rise of Skywalker, but I think this would be a very cool idea: bring Phasma back as a free agent – a la Darth Maul or Ahsoka Tano – in a chaotic galaxy where the Resistance is still struggling to establish some sort of authority. Does Finn hear rumors that Phasma’s still alive and set out to search for her? Or does Phasma secretly approach Rey to try and build a new power base?