By Bennett ColesPublished On: May 28, 2021Categories: Star Wars Characters0 Comments

Star Wars has plenty of villains, and in the old days they were all pretty obviously evil. Jabba has few redeeming qualities. The Emperor was a monster. Grand Moff Tarkin was cold as ice. But as art and culture change, more Star Wars villains are drawn in shades of grey. This is fine, but one of the things I liked most about Solo: A Star Wars Story was the sheer, unashamed wickedness of Crimson Dawn crime lord Dryden Vos.

Don’t be too quick to write off Solo: A Star Wars Story

Solo tends to get a bad rap when compared to the rest of the Star Wars movies. It’s sometimes even called the first Star Wars flop – because it only earned 393.2 million dollars. (The world some folks live in…)

Was it bad timing…

Maybe the initial reluctance to embrace Solo was due to its release soon after The Last Jedi, and the fandom was still tearing itself apart over that movie and in no mood to be kind. Or maybe Solo was too closely compared to the other non-Skywalker movie, Rogue One, which is unfair because Rogue One is  the best Star Wars movie ever made (yes it it – I will fight you).

…or just ahead of its time?

But now, in the wake of Rise of Skywalker, suddenly Solo, in comparison, is looking like a taut, poignant, action-packed thrill ride with well-rounded characters and a plot that actually makes sense. I guess it’s all perspective.

I confess when I first saw Solo in theatres I too was a little “meh” but as times passes, and I watch Solo on video about once a year, it’s really rather grown on me. Young Han Solo is solid, young Lando Calrissian is brilliant, and the supporting cast of Qi’ra, Tobias Beckett and L3 (the socialist, feminist, revolutionary droid) are all good fun.

But what really brings it all together is the villain of the piece: the leader of the crime syndicate Crimson Dawn, Dryden Vos. 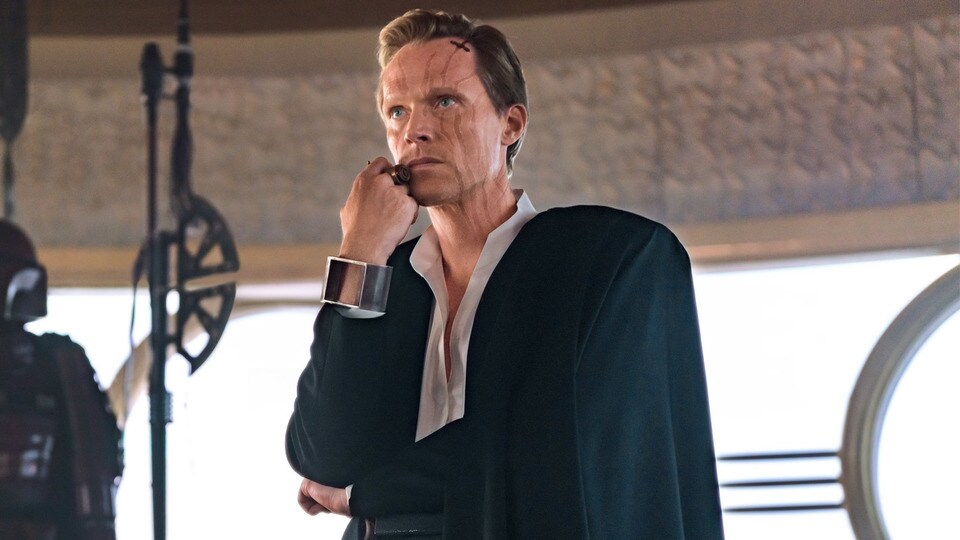 Okay, let’s deal with this right away. Is Dryden Vos, criminal mastermind from Solo: A Star Wars Story related to Quinlan Vos, swashbuckling Jedi heartthrob from The Clone Wars? Though Lucasfilm has said no, it’s fun to imagine that they are. Or maybe Dryden is Quinlan, finally turned to the Dark Side after Order 66.

The first impression we get of Dryden Vos is wealth. His yacht is gorgeous, his party has gathered the richest and most powerful members of the community and his collection of trophies, trinkets and books is stunning. The next impression we get is that he’s ruthless as we watch him murder the local magistrate in his private office. All pretty evil so far, and exactly what we expect from a gangster.

But Dryden Vos, we realize quickly, is far more than some pitiless enforcer. He’s got style and good manners, playing the role of the generous host as our heroes drag their sorry butts into his lavish presence.

The moment that so perfectly sums up Vos is when he greets Tobias Beckett. We all know that the coaxium heist ended in disaster and we might expect this criminal master to run Beckett through. But instead, Dryden grips Beckett by the shoulders, asking with believable sincerity if he’s all right and expressing grief at the loss of Beckett’s partner. It’s just so stylish, creating this image of a popular, caring leader a crew would love to follow.

Maybe it’s just because it’s Paul Bettany playing the role, but I can’t help but like this character. Oh, even I’m not surprised when he turns from laughing playboy to ruthless killer in a moment, and it’s obvious from watching Beckett that Dryden’s manners and smile should never be mistaken for weakness.

Word is that Disney originally had another actor for the film (using motion capture to create an alien) but when the original script got reworked that actor wasn’t available for reshoots and Disney decided to sign Paul Bettany and recreate Dryden Vos as a gangster with taste.

What species is Dryden Vos?

Vos is what’s called a “near-human” which is a vague term Star Wars uses when they don’t want to create a whole new species but they want to share some cool feature. In the case of Dryden Vos, he has red tiger stripes on his face that flush whenever his emotions change or increase. This just makes him extra cool, showing the danger he represents without him saying a single word.

Vos is an Opponent You Don’t Want to Mess With

As I said earlier, one of the best things about Dryden Vos is the fact that we know he’s evil. Kylo Ren is conflicted and General Hux is a joke, but Vos gives us a bad guy who we know can cause our heroes real harm.

The beguiling charm of Dryden Vos

Han Solo clearly doesn’t realize how dangerous Dryden Vos is when they first meet. But the reactions by Beckett and Qi’ra show fans that this guy is no Empire flunky. In their meeting aboard his yacht he lets them explore ways to fix the coaxium problem, his face even lighting up as they come around to a solution, declaring “I’m excited about this plan!”

The next moment, though, Vos politely reminds Beckett that if they don’t deliver the coaxium this time, they’ll all be dead. Of all the crime lords we see in the entire Star Wars series, none present quite the same image of ruthless intent behind their charming smile.

Games with Vos are for keeps

The film reaches a slippery conclusion, with multiple double-crosses between Han’s crew and Vos. One of the few still standing at the end, Han figures that events mostly turned out okay, until he realizes that he’s been played by the one person he never suspected. This might explain why Han is so reluctant to get romantically involved later in the movie series, and he walks away from Dryden’s yacht a wiser man.

What happened to Han Solo’s girlfriend?

Han might think Dryden was the villain, but Qi’ra reveals her share of villainy by getting on the holo-video and contacting fan favorite Darth Maul, who’s been skulking around in the shadows since the Clone Wars and who is the true master of the crime syndicate. Qi’ra informs him of Dryden’s recent death and pledges to follow him, becoming the new public face of Crimson Dawn. She’s learned from the best, after all.

Well, dang, that isn’t the kind of ending we expected from a Disney collection of movies! But it’s a good sign of the kind of more mature storylines and character Star Wars is capable of. There’s certainly room in the Star Wars universe (tie-in books, anyone?) for us to see Dryden Vos again, and I sincerely hope we do.