The Return of Ezra: Star Wars Has a Great Opportunity

With a lot of new Star Wars content on the way via Disney in the coming years, fans are excited to see many beloved characters returning to the screen. One such favorite is Ezra Bridger, the main character of the acclaimed Star Wars: Rebels animated series. But how would this happen, and why is it important?

Who is Ezra Bridger?

First of all, let’s take a moment to explain who Ezra Bridger is. If you’re already a fan of Rebels this is nothing new, but if you’re one of many Star Wars fans who’ve never seen any of the animated shows please enjoy this brief introduction.

Ezra was an orphan growing up on the planet Lothal, having survived as a pickpocket and street urchin after his parents were arrested by the Empire for treasonous talk. One day, as a teenager, Ezra tried to steal some Imperial cargo already stolen by the Specter crew, and through a series of adventures he joined the Specters – former Jedi padawan Kanan, Twi’lek pilot Hera, Mandalorian explosives expert Sabine, Lasat thug Zeb, irascible droid Chopper and their amazing ship, the Ghost.

Ove four seasons of Rebels, Ezra grew from a hot-headed, unreliable individualist into a mature leader in the fledgling Rebellion. His time as Kanan’s apprentice helped him develop his innate Force ability, but rogue Jedi Ahsoka Tano also played a huge role in shaping him. Not to spoil some of the most epic episodes in Season 2 and Season 4, but by the end of the series Ezra and Ahsoka shared a unique bond, with him asking her specifically to come and find him in the future.

Starting in Season 3, Ezra and the Ghost crew were hunted by Grand Admiral Thrawn, an Imperial master tactician on a mission to search and destroy all Rebel Alliance forces. The final showdown brought Thrawn and Ezra face to face over Lothal and while we don’t yet know their ultimate fate, we suspect that it was a common one. 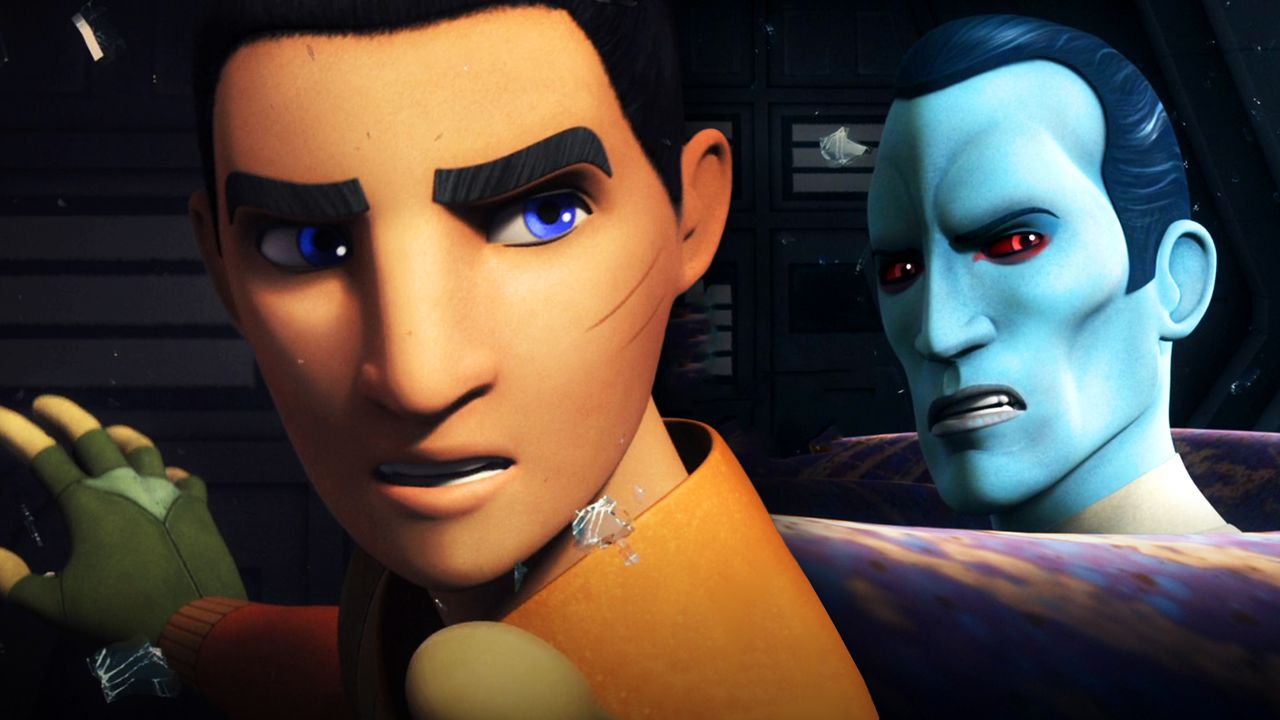 The Legacy of Star Wars: Rebels

Considering it’s only four seasons long, Rebels accomplished an astonishing amount for Star Wars lore.  Based in the four years prior to Rogue One / A New Hope, it acts as a bridge between the Prequel Trilogy / Star Wars: The Clone Wars and the Original Trilogy. Many Clone Wars-era characters return (usually older and wiser) and many Rebellion-era characters are shown in their early days. But none of these folk take center-stage, instead acting as a rich and beloved supporting cast to the Specters. What could have been cheap pandering to fanservice became instead a critical part of the overall Star Wars story.

How to train your Jedi

Ezra himself is a major part of that story. Born on the same day that the Empire was created, he grew up in a galaxy without Jedi, where the Force retreated into legend and the old ways were lost. He was initially trained by Kanan, who did his best to pass on proper Jedi teachings, but Kanan himself had only been a padawan when Order 66 began Imperial rule, and much of his training was improvised.

Ezra’s second teacher was Ahsoka, who had completed her formal Jedi training but then lost her faith in the Order and turned her back on it. And his third teacher was Maul, the former Sith lord who opened Ezra’s eyes to the potential of the Dark Side of the Force. Ezra is something entirely new: a Force-wielder influenced by Jedi, Sith and improvised training who lost all three of his teachers and was left to find his own way.

Ezra’s lightsaber was a perfect symbol of his journey. His first lightsaber was a unique design that incorporated a blaster pistol into the hilt. Clearly Ezra didn’t yet trust the Force enough to forsake a good blaster at his side, and he used both aspects of his weapon as he battled the Imperial Inquisitor duo and even Darth Vader himself. But after his lightsaber was destroyed, and Ezra barely survived his encounter with Vader, he created a traditional lightsaber. This showed his growth both in wisdom and his connection to the Light Side of the Force. 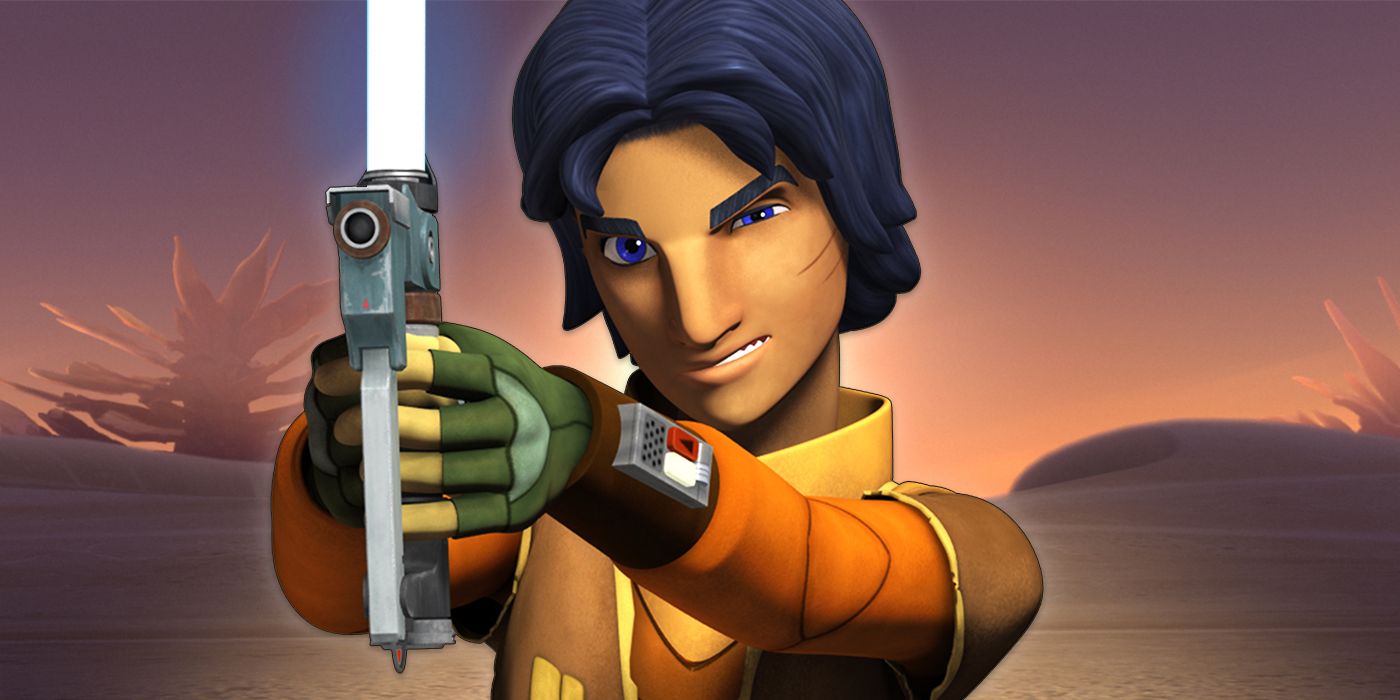 Ezra’s finale in Rebels was dramatically satisfying, but fans were left with many questions. Star Wars now has multiple opportunities to answer. They chose not to in the Sequel Trilogy of movies – except it’s been noted that Rey heard Kanan but not Ezra at the climax of The Rise of Skywalker, implying he’s still alive at that point – but the end of the Skywalker Saga movies doesn’t mean the end of Star Wars.

The Opportunity in The Mandalorian

When Season 2 of The Mandalorian got underway, fans were thrilled to hear that Ahsoka Tano was going to be making her live-action debut. The episode delivered in spades, but toward the end Ahsoka dropped a bomb on the audience. Having vanquished her enemy, Ahsoka demanded an answer to her simple question: “Where is Grand Admiral Thrawn?“

Whoa! Has Ahsoka discovered something about Ezra and Thrawn’s shared fate? Are Ezra and Thrawn somehow related to the plot lines of The Mandalorian? What role might Ezra play in the fate of Baby Yoda? Did Thrawn somehow escape the desperate situation we witnessed in the last episode of Rebels? Star Wars fans are chattering about how Ezra or Thrawn might be related to Mando’s adventures.

The Opportunity in Star Wars: Ahsoka

Of course, Ezra and Thrawn are much more a part of Ahsoka’s story than Mando’s, and excited fans have learned of a live-action Ahsoka TV series coming to Disney+. Ahsoka’s episode in The Mandalorian can almost be seen as a prolog to Star Wars: Ahsoka and while we can only speculate what stories her show will tell, the fact that she mentioned Thrawn so prominently should give us a big hint.

The last time we saw Ahsoka before The Mandalorian was in the epilog of Star Wars: Rebels. Based shortly after the events of Return of the Jedi (so, the same time period as The Mandalorian) she returned to the planet Lothal specifically to gather young Sabine and go search for Ezra. Looking every bit the Jedi Master and often referred to by fans as “Ahsoka the White” this scene might be closely linked to her Mandalorian appearance. If she’d just learned Thrawn’s location, she might know what happened to them both, prompting her and Sabine to try and free Ezra. If Ezra is going to join the cast of Star Wars: Ahsoka, it could be an interesting relationship between the two Force-wielders. Remember: although they were trained in the Jedi way, neither of them are actually Jedi and are not bound by Jedi codes. They clearly both have strong ties to the Light Side, as their ability to access the Jedi temple on Lothal showed, but they’ve both been cast out into the galaxy and forced to find their own way.

Ezra and Ahsoka – an explosive combination?

From a character perspective, Ezra and Ahsoka are both complex and unpredictable – related to each other by their shared experiences but separated by a wide gulf of maturity. Remember how young Ezra still is and how brash he can be, and that dangerous flirtation he had with the Dark Side.

Ahsoka refused to train Grogu (Baby Yoda), for fear of failing him like she believes she failed her master, Anakin. Ezra began his training under Kanan and grew close to his master, but was unable to save him during the fight to save Hera on Lothal. Both characters carry guilt and pain.

And what’s happened to Ezra since that final mission on Lothal? He may still be alive, but in what sort of mental state? Ahsoka herself revealed a smoldering fury in her live-action debut – will we also meet a damaged and dangerous Ezra Bridger?

The next meeting between Ahsoka Tano and Ezra Bridger might not be the happy reunion some expect. Ahsoka, Thrawn and Ezra: Star Wars Has a Great Opportunity

It’s interesting that three of the most intriguing figures in the Star Wars universe all made their film debut in animated form. With Ahsoka now confirmed in live-action and Thrawn and Ezra likely not far behind, Star Wars has an amazing opportunity to build on its existing, rich and deeply intertwined legacy without being shackled to the Skywalker family.

Ahsoka, Thrawn and Ezra are three of the best-developed and most-loved figures in Star Wars. If Dave Filoni and team can work their magic yet again, we’ll hopefully see this trio together in a new, epic storyline that can take Star Wars in fascinating directions that remain loyal to the legacy but still give us something new.