Perhaps the best thing to come out of the Star Wars Sequel Trilogy was its cast of colorful characters, and one character not always given his due is General Armitage Hux, played ably by Domhnall Gleeson. Blustery, cruel, simpering and genuinely funny, General Hux is the perfect movie villain. And like so much else, he was wasted in The Rise of Skywalker.

So where did this little maniac come from? Although we never see it in the movies, other Star Wars properties have revealed that Armitage was the illegitimate son of Imperial Commandant Brendol Hux He was evacuated with the families of senior Imperial officers fleeing into the Unknown Reaches after the Galactic Concordance and young Hux was raised in the fledgling First Order.

Hux was frequently mistreated by his uncaring father and was forced to fight for every advancement. He eventually murdered his father with the help of Phasma, and with this oppression removed he rose swiftly through the First Order ranks. Hux worked hard to push his new stormtrooper program, kidnapping children practically from birth and training them into a loyal fighting force.

Throughout Star Wars: The Force Awakens and through much of Star Wars: The Last Jedi, General Hux comes across as a classic bad guy in the old school Star Wars model of black and white morality. Hux ordered Starkiller Base to destroy the Hosnian system. Hux arrived with his star destroyers before the Resistance escaped, bombarding their base and  chasing their fleet. He gave another sinister, over-the-top speech about the illegitimate regime of the New Republic and ultimate victory of the First Order…

…And then got totally humiliated by Poe Dameron offering a taunt about Hux’s mother.

At this point Star Wars introduces us to the funny side of Hux. He’s not trying to be funny but the moment is there, taking the edge off his cartoon villainy and suddenly making him human.

As The Last Jedi unfolds we see Hux’s sarcastic humor emerge more and more, in his frustration why “all this” can’t destroy a few Resistance ships. He reveals that he’s far smarter than we might have thought, and definitely more cunning.

General Hux was driven by personal interests above all

Based on what we see in The Force Awakens, we might initially think that General Hux is driven by a fanatical loyalty to the First Order. His infamous speech as Starkiller Base fires for the first time is one of the most chilling moments in Star Wars. In a scene deeply reminiscent of Nazi rallies, Hux screams out:

“All remaining systems will bow to the First Order! And will remember this… as the last day of the Republic!“

We see in his rivalry with Kylo Ren a self-centered drive mixed with a conniving confidence. Hux admonishes Ren for his reckless plans, and accompanies Ren whenever the young Sith seeks an audience with Supreme Leader Snoke. He would have gladly abandoned Ren to his death after the Resistance attack on Starkiller Base, and it’s only because Snoke ordered Hux to bring Ren to him that the First Order general saved his rival.

Hux has no loyalty to any higher vision of the First Order: he just wants to survive and be in charge.

The rivalry between General Hux and Kylo Ren continued into Star Wars: The Last Jedi, with their first interaction in Snoke’s throne room highlighted by a smug sneer from Hux after receiving praise from Snoke for being able to track the Resistance ships through their hyperspace jump.

Keep your friends close and…

After Supreme Leader Snoke’s death, General Hux initially protests Ren’s claim to be the new supreme leader, but under the threat of a Force choke Hux concedes. Kylo Ren then proceeds with the plan to destroy the escaping Resistance members, ordering a full force of armored troops and a starkiller weapon planetside in an overwhelming show of military superiority.

Hux tries at the point to advise the new leader, but in his rage to destroy Luke Skywalker Ren silences Hux with a Force shove in the command shuttle. Ren orders every gun they have to open fire on Luke Skywalker. Hux then offers the classic line: “Do you think you got him?“ 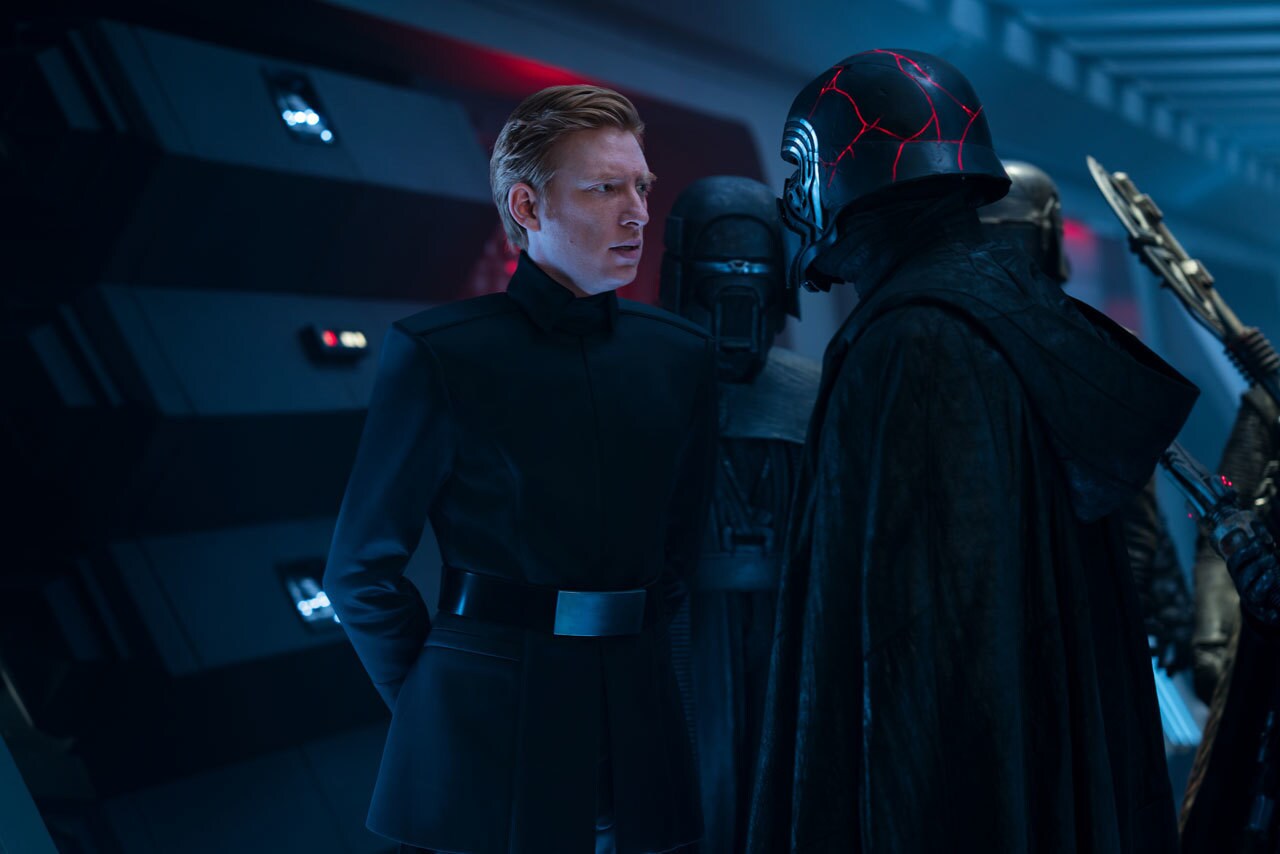 After the failed attempt to wipe out Poe Dameron and his gaggle of rebels, Kylo Ren would have been wise to keep General Hux close, but instead the obsessed young Sith departed on a personal quest that ultimately led him to Darth Sidious and the Final Order.

In Ren’s absence, General Hux was free to turn traitor. If not for the presence of Allegiant General Pryde, General Hux might very well have succeeded in overthrowing a distracted Kylo Ren and set himself up as Supreme Leader Hux. Although Hux was underused in The Rise of Skywalker, his path to destruction was very much in character.

Snoke does muse to Kylo Ren about why he keeps Hux around. While he may have had little patience for Hux’s sliminess, Snoke saw in both Ren and Hux a return to the old style of Imperial power – ruthless leaders willing to order troops to shoot villagers or unleash a technological terror on the New Republic.

Armitage Hux may have been swiftly persuaded to live up to the Imperial ideal as he rose to power, but ultimately he had no loyalty to the First Order, army, fleet, Starkiller Base or even his supreme leader. Hux was out for himself, and while this might make him a simple creature, it makes him a fun character as he uses the First Order as a tool for his own purposes.

His program for training soldiers was undoubtedly to support his own ambitions, and he would have used his troops without hesitation against Kylo Ren or any other rival had he been given the opportunity.

But despite his villainy, General Hux was ultimately an entertaining villain, played with nuance by Domhnall Gleeson. If ever Disney wants to create another Star Wars holiday special and feature the First Order, General Hux would bring exactly the right kind of over-the-top performance to pull it off.