Once upon a time, Star Wars was a simple morality tale of good versus evil. And that was fine. But as the franchise grew, the audience matured and social trends evolved, Star Wars has sometimes struggled to adapt. The Prequel Trilogy often mixed its metaphors (Amidala was a queen, but still the leader of a democracy) and the Sequel Trilogy swung wildly between nostalgia and trope-smashing.

But one Star Wars film knew exactly what it was, and what it was trying to say. Rogue One: A Star Wars Story was the first time Star Wars stepped away from the Skywalker saga (though admittedly, not very far) and it was a glorious example of the kind of mature, complex drama Star Wars is capable of, which fans have been clamoring for ever since The Empire Strikes Back.

Jyn Erso at the center of Rogue One: A Star Wars Story

The centerpiece of Rogue One is its main character, Jyn Erso. And it’s pretty clear from the start that she ain’t your grandmother’s Star Wars hero. 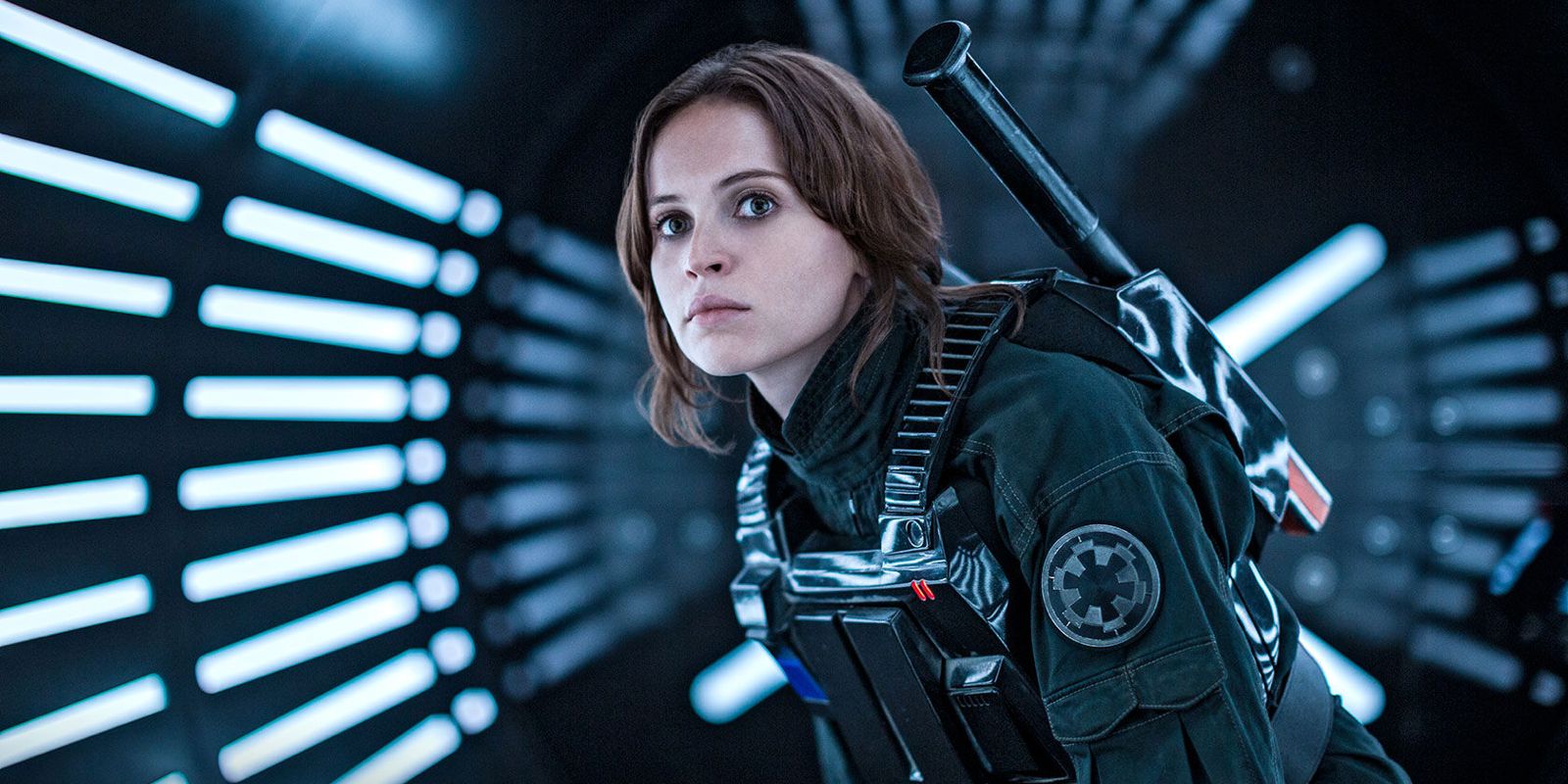 Daughter of Imperial scientist Galen Erso, at age 8 young Jyn saw her mother murdered and her father taken by the Empire. She was raised by resistance fighter Saw Gerrera before he abandoned her for her own safety (because the other Partisans were beginning to suspect that Jyn’s father was an Imperial). Twice abandoned before she was even an adult, Jyn struggled to make her way, assuming false names like Liana Hallik and eventually landing in an Imperial prison with a long list of charges: forgery of Imperial documents; aggravated assault; resisting arrest… By the time we meet Jyn, she is a damaged, dangerous person and the last one we’d expect to save the galaxy.

This is an exciting break from our usual Star Wars heroes – a bona fide criminal with ties to both the Empire’s reign and the kind of Rebel too ruthless even for the Rebel Alliance. Add to that the amoral Cassian Andor, the reprogrammed Imperial droid K-2SO, a traitor pilot and a motley band of drifters, and we have a cast of characters unlike anything Star Wars has shown us before.

Gee, how did the Rebels steal the Death Star plans?

What was perhaps the most brilliant aspect of Rogue One was the decision to base its plot on the most famous story never told in the saga: the raid to get the secret Death Star plans to Princess Leia that leads to the epic opening of A New Hope. (Perhaps one day we’ll find out why and how so many Bothans died to get the plans to the second Death Star…) Nostalgia is a big part of Star Wars, and by giving audiences all kinds of Easter eggs (from A New Hope, Rebels and even Clone Wars) it gave us that warm feeling to counter a startling anti-hero like Jyn Erso.

Rogue One: the best movie in Star Wars

If you read my blog, you know my firm opinion that Rogue One: A Star Wars Story is the best movie in the franchise. From the introduction of Rebel spies, to the exploration of the military side of the Alliance, to the explanation of how the fatal flaw in the Death Star came to be, to the galactic world-building of Jedha City to the freaking epic Battle of Scarif, Rogue One has it all.

But it could have been just a jumbled mess if it hadn’t been tied together by the central character of Jyn Erso.

Jyn Erso: the most interesting hero in Star Wars

Thankfully, Jyn Erso has the weight to carry her ambitious story. Full credit to Felicity Jones for bringing Jyn to life, and full credit to Diego Luna and the rest of the cast for supporting her. But Rogue One: A Star Wars Story is a rare example of where the quality of writing matched the quality of acting.

We learn just enough of Jyn’s past to know why she’s on the wrong side of the law, why she has certain skills and why her life is so bleak. She has no love for either the Rebel Alliance or the Galactic Empire, and she has no expectation of people sticking around. Her kyber crystal necklace is her only connection to her past, the only sign that she cares about anything, and we get the sense that she’s as likely to fight her old friend Saw Gerrera as speak to him.

Word of the growing war brings nothing but cynicism from her: she has no taste for battle, for rebellion or even for making friends. Only when her father is killed at the Imperial facility on the planet Eadu does she finally find it in her heart to try and save the galaxy from the “planet-killer” created by the Empire.

It was a risk for Star Wars to build a movie around an anti-hero like Jyn Erso. Not that there haven’t been major characters of questionable morality before, but Han Solo’s self-centered swagger was countered by Luke Skywalker’s idealism, and Saw Gerrera is a dramatic foil too extreme to ever build a story around. Jyn Erso doesn’t even have high-minded Rebel companions to guide her – they’re as morally lost as she is, with the exception that they at least have a sense of purpose.

It’s a sign of excellent writing that we can watch Jyn Erso grow from a justified place of cynicism and isolation to a mid-place where she’ll grudgingly work with the Rebel Alliance to a natural conclusion where she’s willing to sacrifice herself to achieve a greater destiny. Jyn is in a personal battle the entire way, but the story of Rogue One builds a natural, satisfying account of how a person who’s made so many wrong choices in the past can make such a huge personal sacrifice.

Where else can we see Jyn Erso?

Spoiler alert! Jyn Erso doesn’t survive Rogue One: A Star Wars Story. This in itself was a bold decision by the film-makers, because if a character is popular you never want to take away the chance of bringing them back for another movie. But in a galaxy as big as Star Wars, there are always ways…

Jyn appears in the animated Star Wars: Forces of Destiny, a series of animated shorts featuring the women of Star Wars. In a fascinating encounter, a teenaged Jyn meets a young Sabine Wren as they both flee Imperial forces. Neither young woman is willing to trust the other, and we can only imagine how the galaxy might have been different had those two youngsters found the courage to join forces. While the interaction is short, it captures the spirit of both Jyn and Sabine in their darkest years.

There are also some novels built around Jyn Erso, and she’s a playable character in some Star Wars video games.

It’s unlikely that Jyn Erso will appear on screen again, and that is truly a shame. But if not then at least she, like Rogue One, can forever stand in splendid isolation as an example of when Star Wars did everything right.