As a lifelong Star Wars fan, I tried really hard to like The Rise of Skywalker. My initial response was to say, “I’m still processing” because I actually had no idea what I’d just watched. Rise of Skywalker was a confused, pointless mess – it was so all over the place that one struggles to articulate why it was so bad. But I think I’ve been able to zero in on an element of the movie that symbolizes everything that went wrong: the Knights of Ren. 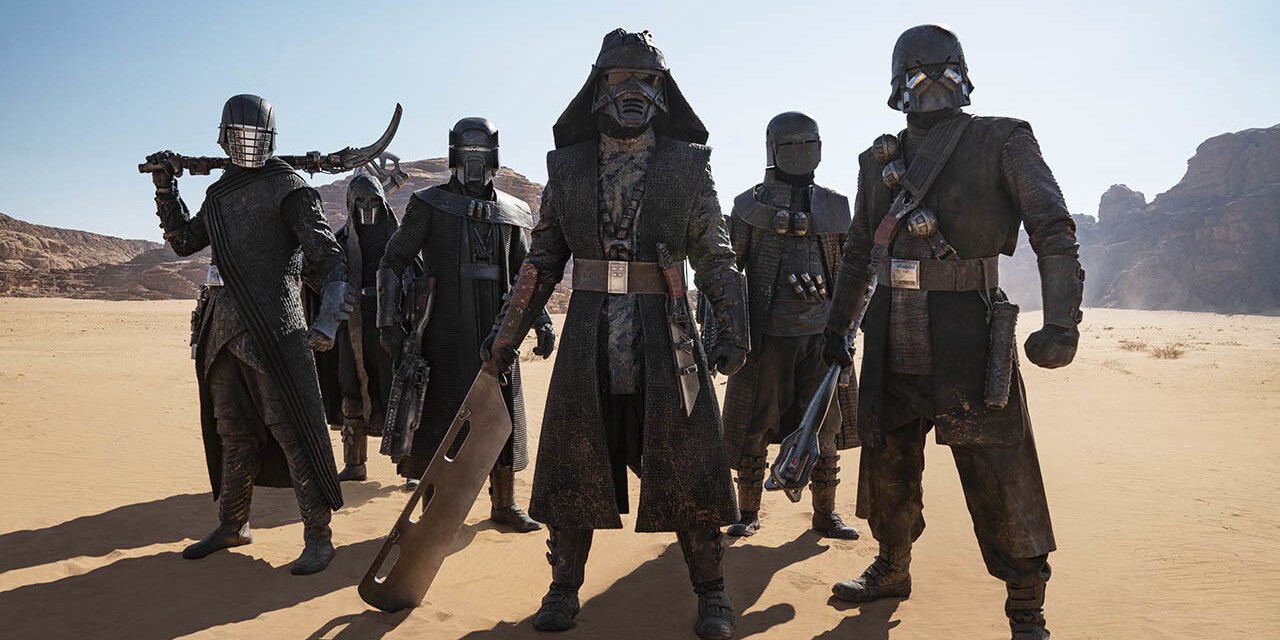 Kylo Ren and his brute squad

You know those guys, the cool-looking, badass thugs who silently follow Kylo Ren around sometimes. First teased in The Force Awakens, the Knights of Ren promised something dark and awesome as the new Disney trilogy kicked off. They only appear once, in Rey’s Force vision, standing ominously behind Kylo Ren as Luke Skywalker’s Jedi temple burns. We knew almost nothing about them, but we were intrigued. In a sense, the Knights of Ren also symbolize what went wrong with Force Awakens, which stylishly delivered a great deal of mystery and exiting potential that we expected the rest of the trilogy to bring to life.

The problem is, the rest of the trilogy never delivered on that potential. Who are the Knights of Ren and why are they so badass? What pivotal role do they play in the drama? What is their relationship to the Sith, the Dark Side of the Force, Snoke and, of course, Kylo Ren himself? The Last Jedi ignores them completely, but most of us can make our peace with that because Rian Johnson undermined most of what J.J. Abrams set up. But with Abrams back in the saddle for Rise of Skywalker, surely we’d be in for a sinister treat as Kylo’s knights came into direct conflict with our desperate heroes… Yeah, no.

We do see the Knights of Ren in real life this time (and not just in Rey’s vision) but honestly they accomplished more for the drama when they were background posers in a dream. At least in Force Awakens their immobile silence made sense in the lurid symbolism of a Force vision – come Rise of Skywalker, what in the world were they accomplishing, standing motionless on a desert hilltop staring off in five directions?

Other than standing around posing, marching in step behind Ren and earning disdainful comments from First Order officers, the only thing the Knights of Ren do is die. And even they don’t do that well. They turn on their old leader as he storms into the Sith temple on Exegol, but thanks to a nifty Force handoff from Rey, Kylo Ren gets himself a lightsaber and makes comically short work of them. And honestly, it’s probably for the best, because as the audience we don’t care in the slightest what happens to these thugs and would rather just get to the real showdown with Emperor Palpatine. The movie would have worked just as well (maybe better) if Kylo Ren had used the Jedi weapon to kill some stormtroopers.

Believe it or not, the Knights of Ren have names

Like so much else in Star Wars: The Rise of Skywalker, the Knights of Ren are a wasted opportunity for something truly cool. If you’re a fan of Star Wars comics or Star Wars reference guides, you probably know that the Knights of Ren actually have quite a backstory. Hailing from the Unknown Regions, they encountered Luke Skywalker and Ben Solo in the years after Darth Vader and the Emperor were defeated. But as the Dark Side consumed Ben Solo he challenged the Master of the Knights to a duel and, victorious, he became the new leader of the knights. 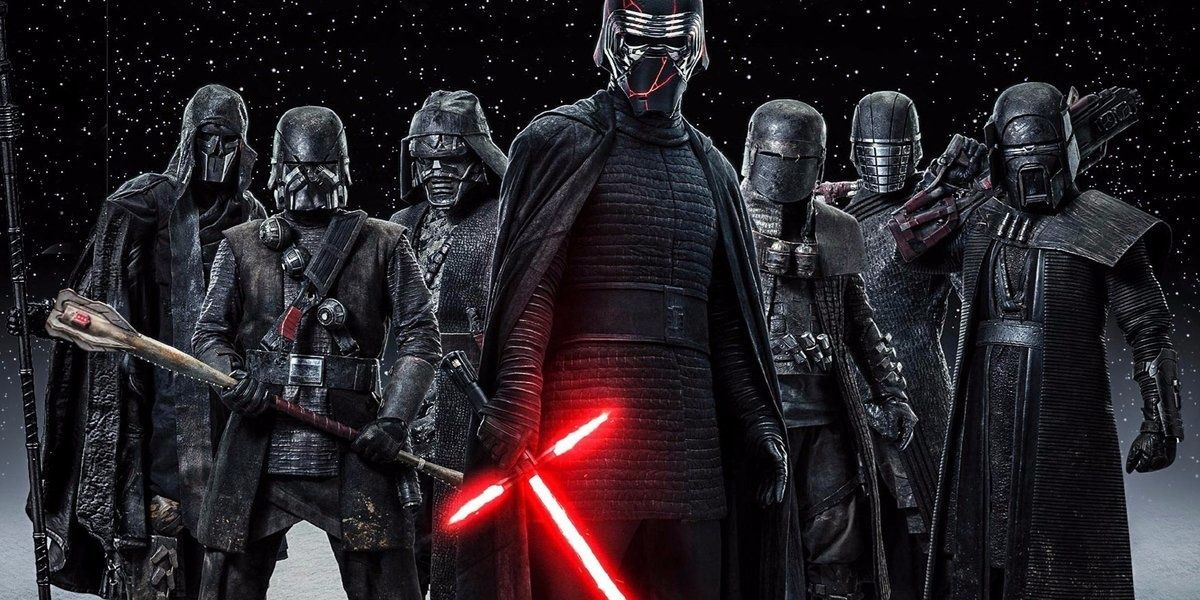 Ben Solo took the name Kylo Ren, the knights staying at his side as he gained power under the tutelage of the Supreme Leader of the First Order. The Rise of Kylo Ren brought the knights into the known regions of the galaxy, but despite their power they never became more than Kylo’s personal bodyguard and hit squad, refusing to join the First Order. They remained this group of rogue warriors connected to the Dark Side but something other (and less) than the Sith.

From what we see on screen, the Knights of Ren obviously approach combat differently from most folks in the galaxy, using weapons and armor un-related to anything we’ve seen before. Here’s a quick rundown on apparently who they are:

This guy is the most Force-sensitive of the knights, using mental powers to frighten and weaken his opponents before engaging in battle. Vicrul is the dark master of the taunt, in other words.

The armorer of the group, Cardo is big into mass destruction. His arm-cannon isn’t the most precise weapon, but it can bring the pain to a large group of enemies all at once.

Easily recognizable for the ridiculously large vibro-blade over his shoulders, Trudgen likes to collect trophies from his fallen foes. Overcompensating, anyone?

The sniper of the squad, Kuruk doesn’t play well with others and is the most likely to listen to Finnish death metal.

Ap’lek uses stealth to sneak up on opponents and strike without warning. So exactly the opposite of what anyone with the title “knight” should do.

The spellcaster of the Ren Knights, he killed his professor in the tower and nearly betrayed his entire school before joining Ren’s elite brute squad.

(Okay, I made that last one up… but you didn’t know for sure, did you? Because no-one knows anything about the Knights of Ren and no-one cares!)

The Knights of Ren personify everything wrong with Star Wars: The Rise of Skywalker

All cynicism aside, the Knights of Ren could have been a really cool part of the saga. If the Sequel Trilogy had decided to focus on the descent of Ben Solo and the rise of Kylo Ren – from Jedi apprentice to master of the Knights to Supreme Leader of the First Order – then this group of elite warriors could have been a central part of the drama and not just been a bunch of posers with ridiculous weapons. They could have played a meaningful part in events, but instead their potential was wasted and they were killed off as a sideshow before the final battle. And it begs the question:

What was the point of introducing the Knights of Ren at all?

Kylo Ren’s character arc is already pretty solid with Luke, Snoke and Rey. Having him join the Knights of Ren provides a bit of extra backstory, but it really doesn’t add much to the descent of Ben Solo to the Dark Side, his obsession with Darth Vader, his relationship to Supreme Leader Snoke or why he killed his father.

Here’s the ultimate test: would the Star Wars story have turned out any differently if Kylo Ren had not been the leader of the Knights of Ren? (dramatic pause…) Nope. They serve no purpose.

Honestly, I’m sort of thinking that the Knights of Ren were just an elaborate excuse to get Kylo into a silly helmet.

They’re glossy, flashy, super-hyped… and ultimately revealed as confused, pointless and without depth. Just like Rise of Skywalker.