Star Wars is full of heroes, but not all of them wield a light saber or fire a blaster. Take the Rebel Alliance, which is primarily a political organization – its goal is to overthrow the tyranny of the Empire and restore democracy to the galaxy. There’s no question that warriors are required in a war, but when that war is bent on something other than pure destruction, political leaders are required.

And that’s why Senator Mon Mothma of Chandrila is so important.

The leader of the Rebel Alliance

Mon Mothma isn’t one of the main characters in Star Wars, but she’s certainly one of the most important figures in the years after Chancellor Palpatine transformed the Republic into the Galactic Empire. A veteran of the senate, Mon Mothma worked tirelessly to stem the growing power of the Emperor. When this proved impossible, she abandoned the dysfunctional senate and joined the Rebellion.

Much of the Star Wars drama focuses on the plucky freedom fighters like the Ghost crew, and it would be easy for us to dismiss Mon Mothma as a soft politician and not a “real” rebel. But Mothma’s defection was a huge step forward for the Rebellion, and her presence as an experienced, respected leader lent a legitimacy that the fledgling movement hadn’t enjoyed before then.

She also had the diplomatic experience and connections to start drawing on like-minded groups, transforming a hodge-podge of rebel cells into a true Rebel Alliance. Keeping order among such disparate (often violent) groups was no easy task, and Mon Mothma deserves more credit that we usually give her for building and leading such an unlikely collection of galactic dissidents. 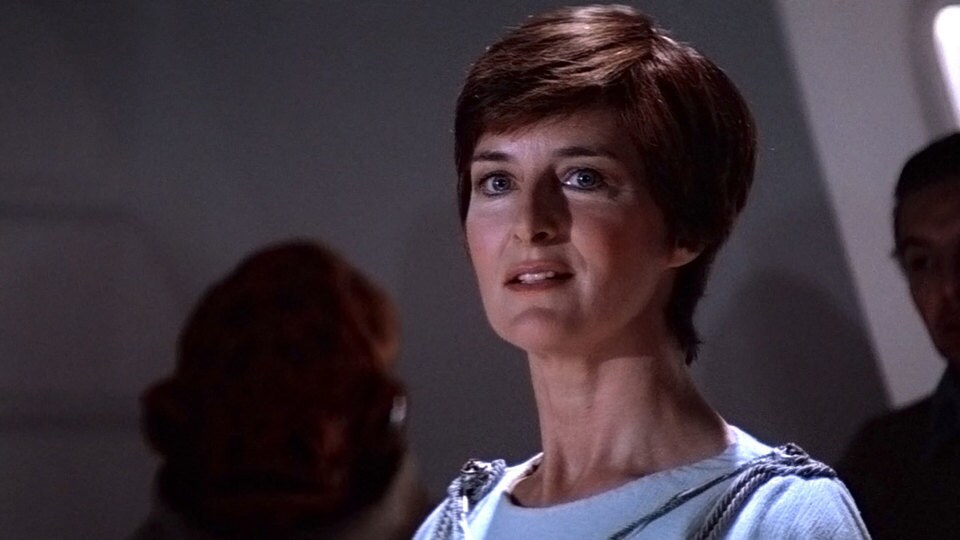 Mon Mothma over the years

Mon Mothma’s first few appearances on screen are noteworthy enough that any casual viewer will likely remember her if prompted, but looking back now it’s fascinating to see just how often she was there, almost behind the scenes, as our heroes played out their dramas.

Return of the Jedi

Her first appearance was in 1983’s Return of the Jedi, where she announced to the Rebel leaders that the attack on the second Death Star is imminent. Her role is short but significant, and contains one of the most memed sentences in Star Wars history: “Many bothans died to bring us this information.” It’s odd in an action movie for a leader to suddenly stop her own briefing to acknowledge the sacrifice of people the viewers have never seen or heard of, but there you go.

As it did with so much else, 2008’s Clone Wars took elements from the movies that were very small and expanded them out in greater detail. Mon Mothma appears in several episodes as a young senator working alongside Padme Amidala and Bail Organa, at first to find a way to peace with the Separatists and then to try and counter the growing powers of Chancellor Palpatine. Although she doesn’t speak often, Mon Mothma is clearly an active part of Republic politics and a woman of both integrity and morality.

Mon Mothma remained in the Galactic Senate during the years of the Empire, trying to use her political power to maintain some semblance of democracy. It would be easy to dismiss these efforts as useless, but it’s important to realize that Mothma still believed in the idea of the Republic and she tried to effect change using the rule of law. At that time nobody really knew just how evil the Emperor was, and to be fair to Mothma, what could anyone have done against Palpatine?

The declaration of support for the Rebel Alliance by Mon Mothma is a key moment in galactic history, captured in 2014’s Rebels. It certainly wasn’t the beginning of the end, but it was quite possible the end of the beginning as previously separated rebel units flocked to join the banner of this famous and respected leader.

Mon Mothma develops more as a character as the series progresses. We see her grappling with militant Rebel leader Saw Gerrera as the new Alliance struggles to find a way to fight the Empire without becoming as bad as the Empire. By the time of the second Death Star battle Mon Mothma appears to be in solid control of her forces, but Rebels shows us that this was far from certain in the early days.

Mon Mothma returns to live action in 2016’s Rogue One as a central figure in the Alliance. At this point the Rebels have been conducting covert operations against the Empire for several years but there has been little open warfare and many elements are still hesitant to commit to all-out war. Mothma can be seen trying to corral the various leaders, not through force of will but through persuasion and argument.

By this time many groups are following her lead, but when news of Jedha reaches Yavin the fragility of the Alliance becomes clear. At this point the drama might have allowed her to cut off the discussion, take charge and commit to battle, but here Mon Mothma shows her character. She still seeks to build consensus, to ensure all related viewpoints are expressed, to act as a politician. 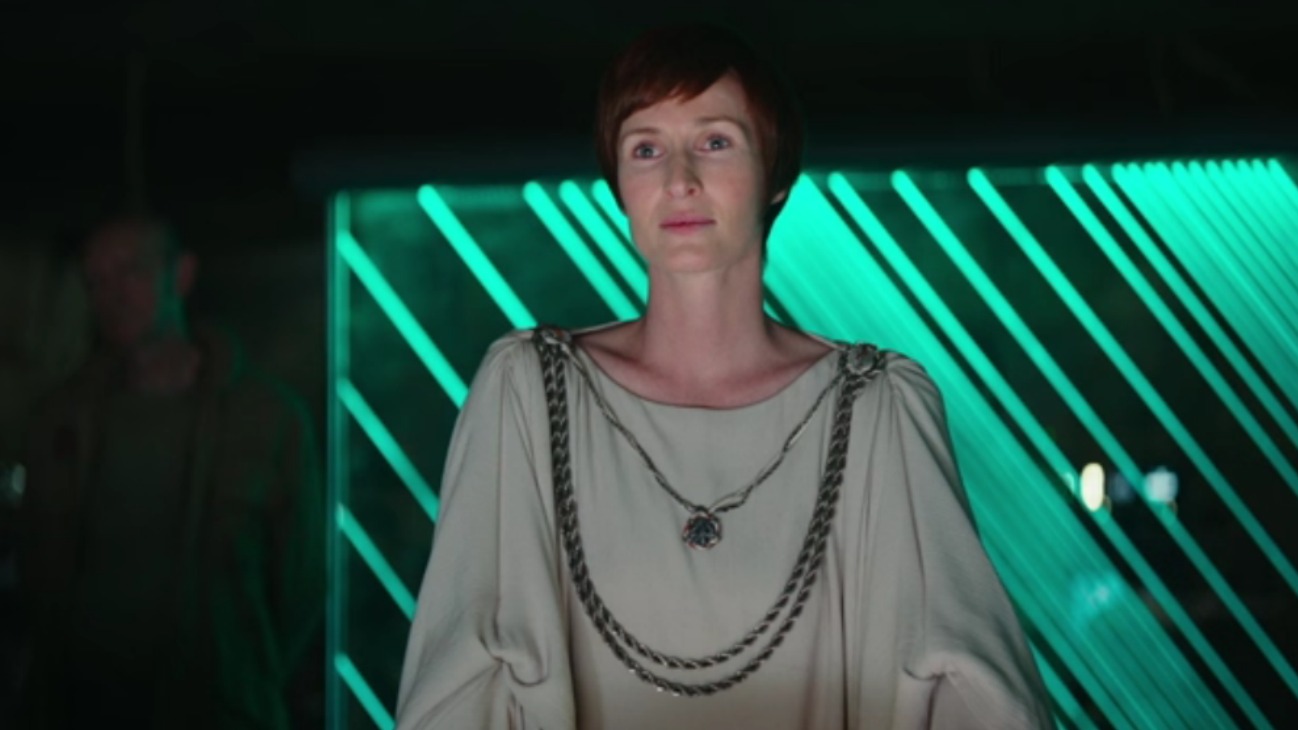 This is sometimes portrayed as the great weakness of Mon Mothma – especially by fighters like Saw Gerrera – as she appears to dither rather than act. Star Wars is enough of an action-movie series that viewers expect decisive action, but both Rebels and Rogue One explore the very real conundrum facing the leader of a freedom fighting force: what lines are you willing to cross in order to achieve victory.

If Saw Gerrera had been the original leader of the Rebellion, the war would have started much earlier, and probably ended much sooner – with the early, scattered, disorganized Rebellion crushed under the thumb of the Empire. And the fighting would have been bloodier, more vicious and far more likely to result in civilian casualties.

Under Gerrera, the Rebellion might have turned out no better than the Empire – a bunch of terrorist thugs fighting to the last man even though their original cause was long lost.

Mothma, in contrast, had the wisdom to keep her forces on the fringes at first, gathering strength until the time was right. It’s true that the Battle of Scarif was forced upon her, but because of her long efforts to build a coalition the Rebellion was in a position of strength to act decisively when the moment finally came.

She also ensured that anyone choosing to follow her remembered what they were fighting for. Gerrera, in contrast, was the leader of a fringe group of terrorists who could cause trouble but who were really no threat to the greater Empire.

Saw Gerrera was able to score quick victories, but they were small. Mon Mothma was able to play the long game and ultimately lead her forces to victory. There’s a reason she was made chancellor of the New Republic when the war finally ended after Return of the Jedi.

The perfect balance of the fighting diplomat could be Bail Organa or his daughter Leia. Both put themselves in real danger one or two times, but they never became jaded toward death or stopped believing in the cause of justice. But even if they were the ideal, both Bail and Leia deferred to Mothma and were willing to follow her.

That alone speaks to her strength of character and suggests that the New Republic made the right choice in selecting Chancellor Mothma.