In the Deeper Sense, Porkins Was All Right

No-one knows why some things become popular, and Star Wars characters are no exception. Jar Jar Binks was supposed to be the new fan favorite, and we know how that turned out. But one minor character has, over the years, gathered a fan base any gungan pretender would dream of: Lieutenant Jek Tono Porkins.

Think back to the original Star Wars movie and the Battle of Yavin, that epic attack on the Death Star deemed so important that the whole galaxy built its new dating system off it. (The dating should be based on the Destruction of Alderaan, but whatever.)

The rebels launch every pilot they have, barely a single squadron each of X-wing fighters and Y-wing bombers. Early in the battle, as Red Squadron advances, the various pilots check in, including Jek Porkins.

Porkins was Red Six (or Red 6, if you prefer). I’ve always wondered how each rebel pilot gets their designation, but it clearly isn’t by seniority. Porkins ranks below the New Kid from Tatooine by that measure, and if there’s one thing we sense as soon as we see him in his X-wing cockpit, it’s that Porkins is an experienced pilot.

Okay… But why do fans love him?

Porkins is slightly memorable because we actually know his name in the film. He tells Biggs Darklighter to follow him and Biggs replies, “Right with you, Porkins.” So there’s that – at least we know his name, unlike most of the other pilots who at best get a call sign.

Maybe it was some kind of 1977 joke – call the hefty guy “porkins” and everyone will laugh. (It’s not in the movie, but apparently Jek’s nickname was even “piggy”.)

Or maybe it’s simply because Porkins was portrayed by a talented actor who put everything he could into five lines. (Yep, only five – pretty sure the stormtrooper in Mos Eisley got more.)

A big man with a big heart

Porkins was played by William Hootkins, who by all accounts was a charming man, well-liked by his peers. Apparently Hootkins was originally offered the role of what would have been Jabba the Hutt but he turned it down – which was a good call, since that scene got cut anyway. But I guess something about the idea of being a space pilot in the most badass starfighter in the galaxy appealed.

The power of good acting

The Battle of Yavin scene in Star Wars is remarkable for how many characters it introduces. With no introduction we meet Biggs, Wedge, Porkins, Red Leader, Gold Leader and a bunch of other rebels who were practically indistinguishable from each other due them all wearing identical flights, their faces half-hidden by helmets and yellow visors, and each squeezed into an X-wing or Y-wing cockpit.

Star Wars did something unusual? No…

From a character standpoint, this scene does everything wrong. Nobody should introduce a dozen or so new characters in the climax and then kill almost all of them off. And yet, it totally works – and we remember each one of them.

I have to tip my hat to each of of those actors for bringing to life an entire community of freedom fighters in a single, action-packed scene which set the tone of the Rebel Alliance for the rest of the Star Wars saga.

One final note, which I think is really cool. William Hootkins was also in Raiders of the Lost Ark. Yes! He was the younger of the two US federal agents who hire Indy to find Abner Ravenwood and recover the Lost Ark. Hootkins delivers the classic line: “Top. Men.” which is practically the punch line of the entire film.

What Else Do We Know About Jek Porkins?

There have been many hours spent speculating on the history of this rebel pilot, and many an article written. But the latest Star Wars database lists Jek’s homeworld as Bestine IV and at some point he was assigned to Tierfon where he flew as one of the Tierfon Yellow Aces against the Empire.

Is Porkins in Rogue One?

When Rogue One hit theatres, fans were delighted at how many Easter eggs there were to explore. The Ghost is clearly visible a few times, Red and Gold Leaders both have speaking parts, and we found out why Luke was given Red Five (or Red 5, I’m flexible) for a call sign: a vacancy had opened up.

Comments appeared on Youtube channels claiming sightings of Biggs Darklighter and Jek Porkins in the background at the Yavin 4 rebel base, but there’s nothing definitive.

What does the Star Wars community say?

Wookipedia tells of what Biggs, Porkins and other pilots were apparently up to before the Battle of Yavin, prior to being recalled to the new military base after the Battle of Scarif to bolster the fighter pilot numbers. But whether Jek Porkins was assigned to the mission to Scarif or another anti-Imperial task is still officially up in the air.

The Fateful Battle of Yavin

We don’t know much about his early life or why he left his homeworld behind to fight the Empire, but we know for sure that Porkins flew his X-wing and challenged the Death Star’s seemingly impregnable defenses.

Look at the size of that thing…

Remember that many of these rebels had already seen the Death Star only hours ago, during the recent Battle of Scarif, where some of their friends had been killed. Those who hadn’t had certainly been told, and every member of the pilot corps must have been shaken. It’s a sign of their character that these guys flew into battle at all. 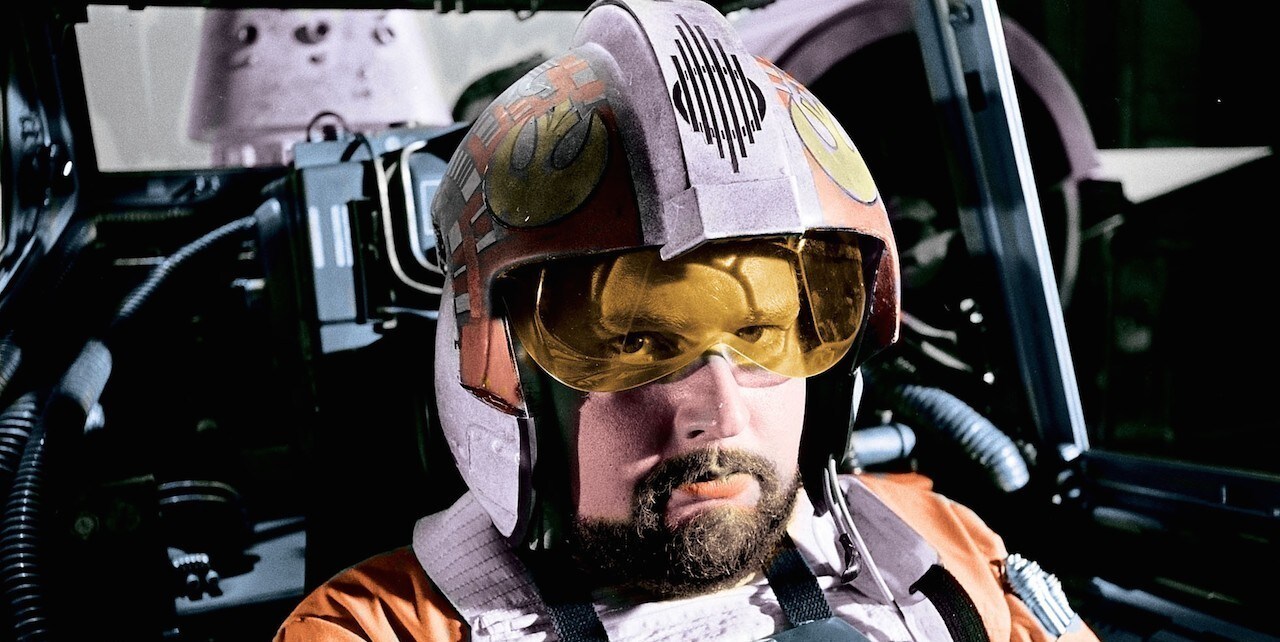 A no-nonsense kind of inspiration

Jek Porkins had the force of personality to get the pilots moving. There’ll be time for tears later, he might have said, even as he told the new kids what fighters they were assigned to. He might have only been Red Six (fine, Red 6) but I suspect his cool confidence moved the younger fliers to find their courage.

Early in the battle we see the roles of the pilots interchanging as they follow one another on surface attack runs. We get the clear sense that Porkins is a senior member of the pilot community, cool under fire and the kind of guy who could take down a squadron of TIE fighters on his own.

What happened to Jek Porkins?

But then, suddenly, something goes very wrong. It isn’t clear from the movie footage, but Youtube theorists report that a piece of debris strikes the X-wing as Porkins is completing his latest strafing run on Imperial gun positions.

The damage must be related to his maneuvering controls because his fighter becomes sluggish. He barely has time to report the problem to his friend Biggs before the Empire shoots him out of the sky.

Why did Porkins die?

It seems his luck finally ran out over the Death Star’s deadly surface, a stray piece of shrapnel damaging his fighter at the worst possible moment. And that, sadly, is why so many brave soldiers get killed: bad luck.

Many an article has been written about Porkins, but it’s still interesting to explore why we’re so moved by the death of this rebel pilot a long time ago. He sticks in our minds despite having less than a minute of screen time.

What’s more, we meet him at the height of the first Star Wars movie, when frankly we were all completely overwhelmed and on the edge of our seats about whether the Alliance’s new military base would be blown to smithereens by the Death Star.

Luke Skywalker is the hero of the Battle of Yavin, without question, but credit has to be given to the  brave pilots who supported him. Credit is also due to the inspired actors who together created a sudden ensemble cast who we’re genuinely cheering for, despite having never met them before.

Porkins was indeed all right

Porkins is perhaps the most memorable character due to his calm (not-quite-cocky) self-assurance which is shattered so suddenly by bad luck. Perhaps he represents all those faceless rebels who gave their lives to the cause of freedom.

Honestly, who knows? But Porkins is an example of when Star Wars did it absolutely right.