The Question of Qi’ra: Star Wars Shades of Grey

Once upon a time, Star Wars was a fairy tale, with a clear distinction between Good and Evil. Luke Skywalker wore white. Darth Vader wore black. And Han Solo wore both because he was a bit of a scoundrel. But over the years, as audiences have evolved and the galaxy has grown, Star Wars has continued to to move away from the purest faith and has embraced many shades of grey. One of the best examples of this is Qi’ra, the female lead of Solo: A Star Wars Story.

Qi’ra is played by Emilia Clarke, famous for her leading role in Game of Thrones, and Ms. Clarke was an excellent choice to bring understated nuance to a character many dismissed when they first saw the film trailer. Qi’ra’s purpose was assumed by some fans to be just a romantic interest for Han, a pretty girl who could flash a smile and flick her hair.

It’s true that Qi’ra is Han’s romantic interest, but she’s much more than that. Star Wars movies haven’t always made use good use of subtlety, and the first half of Solo seems more interested in revealing details of Han’s backstory and introducing classic characters like Chewbacca, Lando Calrissian and the Millennium Falcon. But Qi’ra continues to grow in importance with each scene, masterfully underplayed by Clarke to set up the surprise finale. But more on that later.

Solo: A Star Wars Story – Better Than You Remember

Having watched this movie a few times, I’ve come to appreciate that Solo is one of the better offerings in the 12-movie set. It’s not perfect, but it’s funny, exciting, crisp and – above all – filled with morally ambiguous characters. Tobias Beckett was probably once a good man but too many years on the edge have hardened him beyond repair. Dryden Vos is intelligent and stylish but also vicious. Lando Calrissian is smooth, talented and charismatic, but he’s a self-serving cheat.

And then there’s Qi’ra. We first meet her as a girl on the streets of Corellia, scraping out an existence under the watchful eye of local crime boss Proxima. Lady friend to a young Han, and desperate to escape their wretched life, her eyes reveal that desperate hope of a youth not yet crushed by the brutal realities of life in a gang.

Han and Qi’ra try to flee Corellia and almost make it, but Qi’ra is captured and dragged away while Han looks on helplessly. Even here, though, we glimpse her strength. She tells Han to keep going, to not look back. At that point, early in the film, we as the audience might think that’s the end of Qi’ra, just a sad footnote in Han Solo’s story. Fans might have even wondered why Emilia Clarke was brought in for the role.

But we eventually realize that this is Qi’ra’s story as much as it’s Han’s. Several years later, when Han Solo, Chewbacca and Tobias Beckett come to report their mission failure to Dryden Vos, Han gets the surprise of his life. Not only is Qi’ra still alive, she’s a lieutenant in Dryden’s crime syndicate Crimson Dawn. 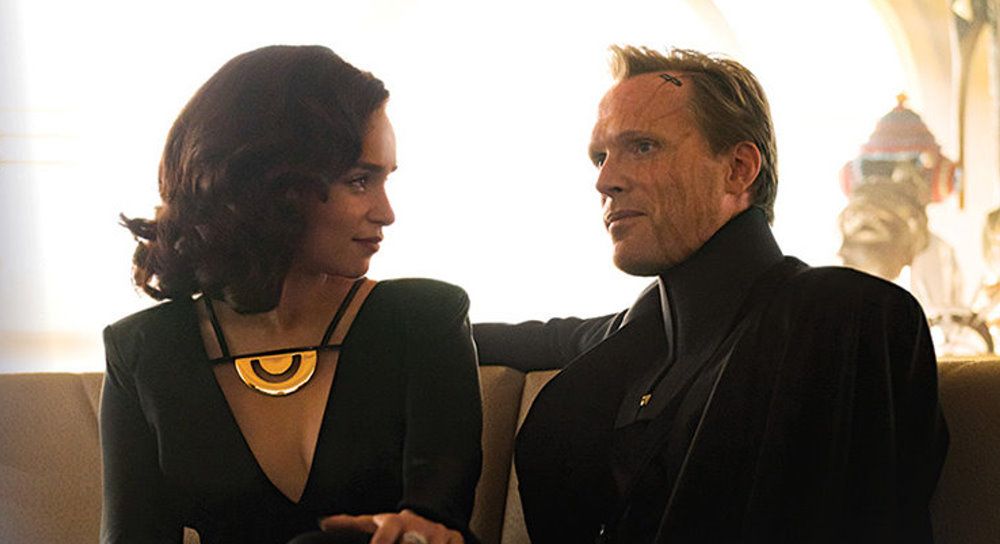 This is a nice twist, but with Dryden Vos commanding every scene he’s in Qi’ra seems almost lost in the background. As Vos grills Han and Beckett over their lost coaxium Qi’ra seems to do little more than sit demurely – but ultimately it’s her intervention that saves Han’s life.

Her relationship with Dryden is an excellent example of the subtlety of her story. We can see that he’s fond of her and respects her, but we’ve also learned that behinds that charming smile Vos is absolutely ruthless. Qi’ra has earned some control over her actions within Crimson Dawn, but there’s no doubt that she’s anything other than a slave.

Qi’ra joins Han and his gang on their Kessel Run scheme. Her official role is to represent Crimson Dawn, but as the ship cruises through space we see Qi’ra and Han reunited in private. The difference in their positions is startling. Han’s comments reveal that his vision of their future is unchanged from what they’d imagined long ago on Corellia. Qi’ra is genuinely happy to see him, but behind every word is a sadness Han seems unable to perceive.

There may be some related ideas behind the two romantic relationships we see Han Solo fall into in his life. When this character first swaggered into the Star Wars movies I think we all assumed that he was a smooth operator with the ladies, with no shortage of female companions in his checkered past.

But Star Wars canon now suggests that he really only had two loves: Qi’ra and Leia. No matter what we might otherwise adore about Han, it has to be mentioned that neither romance ended well.

Part of it might be that Han is attracted to strong, independent women who may themselves have trouble settling down, but I think it’s fair to say that Han never developed a very strong skill at listening.

Yes, Han and Leia fell in love surrounded by war, a bounty on his head, the fall of the Galactic Empire and the return of the Jedi (see what I did there?) – but even these shouldn’t stop a strong romance from blossoming. Interpreting the mess we see in The Force Awakens, Han seemed to think that commitment was optional, when the right action would have been to support Leia.

With Qi’ra the galactic stakes are lower, but Han seems unable to hear what Qi’ra is trying to tell him. He’s looking for a sign that she’ll escape her existence, but he’s clueless to what she’s really saying.

I wonder what sort of relationship advice Han’s friend Chewie gave him over the years. Chewie never gets enough credit for anything, and on this subject let’s remember that he’s been happily married for decades (if we accept some elements of a certain holiday special as canon -check out the video, if you dare…).

Like her boss Dryden, Qi’ra has no shortage of style. While not the official leader of the Kessel Gang, she proves why she’s a lieutenant of Crimson Dawn in her recruitment of Lando and her confident role on the planet Kessel itself. But also like Dryden, behind that style lurks a heart as ruthless and opportunistic as any crime lord. 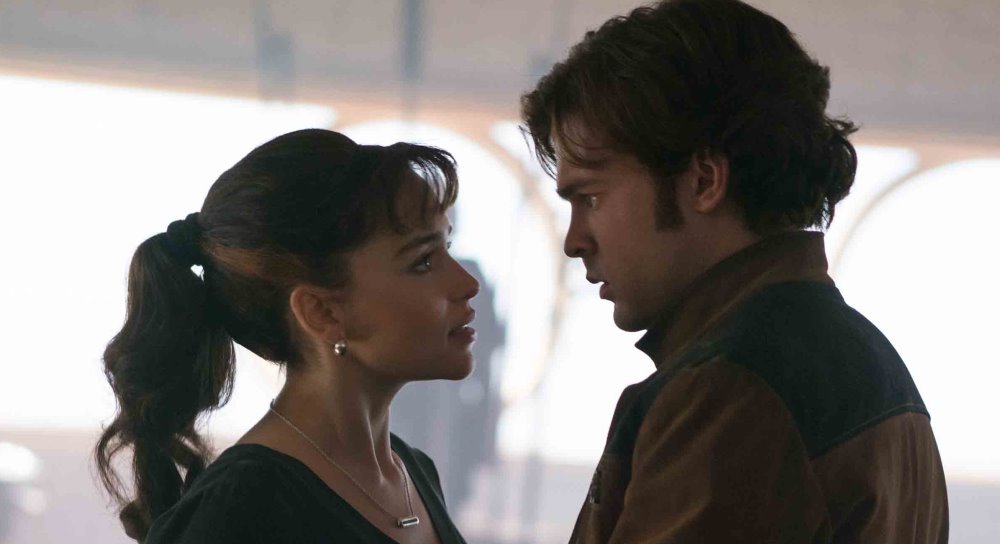 Again, I think we can safely say that Qi’ra is genuinely happy to see Han again, to help him steal more coaxium and to see the Millennium Falcon land safely on the planet Savareen to get the coaxium refined. We might be tempted to think that she’s willing to explore the idea of running away with Han. We could even imagine that she might dream of escape from Crimson Dawn.

But as Dryden’s ship arrives at the refining site and Han attempts his crazy double-cross, we finally see Qi’ra’s true colors. She’s not interested in the war against the Empire, or in running away with her childhood sweetheart. There’s no room in Qi’ra’s heart for nobility or love. Having survived her years under Proxima and then endured slavery under Dryden Vos, all Qi’ra understands is power. And in the final moments of the film she not only murders Vos and abandons Han, she becomes the leader of the crime syndicate and pledges her loyalty to the true ruler of Crimson Dawn: Darth Maul.

Perhaps one of the reasons why Solo: A Star Wars Story wasn’t well-received by fans is that it abandoned the clear “good versus evil” of the original film. Also, those movie-goers who’d never watched Star Wars: The Clone Wars or Star Wars: Rebels would have been surprised to see Maul, since last they saw he’d been cut in half by Obi-Wan Kenobi.

But this new moral ambiguity is a theme that’s been growing in Star Wars. Qi’ra facing down the holo-video of Maul as they plot the next move of Crimson Dawn is a dark way to end her part of the film. You have to wonder if Qi’ra would collect a bounty on Han himself if Maul ordered it. But the biggest sign of her character comes not from any evil deed, tough talk or maniacal laughter, but the calm, calculated, utterly self-serving way Qi’ra seizes the opportunity, even offering a beautiful smile as she does it.

As Star Wars moves into shades of grey with productions like The Mandalorian, an ambiguous character like Qi’ra, mostly overlooked until now, can serve as an early example of where this franchise could go.