A Review of Star Wars: The Empire Strikes Back

Making a sequel might seem like a no-brainer. If the first movie was a hit, just make another like it. But many sequels fail because they can’t measure up to the original, or they really are “just like it” and become a boring re-hash. But sometimes a sequel surpasses the original and becomes a classic all its own. Such is the case with perhaps the greatest sequel of all time – Star Wars Episode V: The Empire Strikes Back.

How do you top Star Wars?

And this was no small feat. I mean, Empire came on the heels of Star frickin’ Wars, one of the most iconic movies in history that, at the time, held the record for the highest grossing box-office in history. I’d like to think that George Lucas, when asked whether he felt he could top his greatest movie, coolly replied, “Hold my beer.” 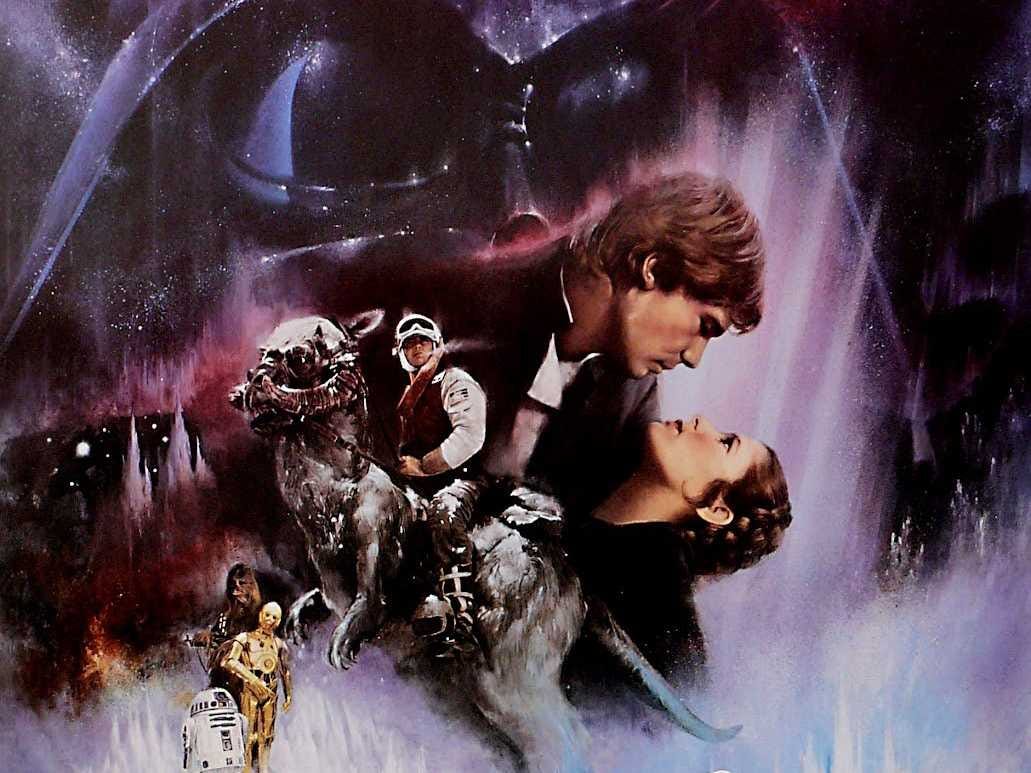 Recognizing that his true talents lay in producing the vision rather than writing, Lucas hired a top screenwriter, Leigh Brackett, who tragically died unexpectedly in what should have been a routine hospital visit. Her early draft of the film passed to Lawrence Kasdan, who ran with it and produced an epic script that took everything that was good about Star Wars and made it better. Seasoned director Irvin Kershner came in to bring Kasdan’s script to life and John Williams returned to expand his magical soundtrack.

All of the main actors were confirmed in their returning roles, ensuring a continuity with the original: Mark Hamill as Luke Skywalker, Harrison Ford as Han Solo, Carrie Fisher as Princess Leia, David Prowse and James Earl Jones as Darth Vader, Anthony Daniels as C-3PO, Peter Mayhew as Chewbacca and even Sir Alec Guinness as Jedi Master Obi-Wan Kenobi. New actors were introduced as well: Billy Dee Williams as Lando Calrissian and Muppet master Frank Oz as the mysterious Yoda.

All the elements for success were in place. But while excitement was high, so was the skepticism. How, after all, do you top Star Wars?

You create Star Wars Episode V: The Empire Strikes Back

There was a lot of pressure as the release date loomed, and the new movie would decide whether Star Wars was just a flash in the pan or a saga for the ages.

Some confusion swirled around the episode number of the film. It was clearly the second, so why was it called Episode V? Starting a long and glorious history of retcon, the original movie was renamed A New Hope and its title was promoted to the “Star Wars saga” of which A New Hope and The Empire Strikes Back were only two parts – with seven other episodes implicitly promised. Pretty bold stuff for a maverick filmmaker with a single blockbuster under his belt. 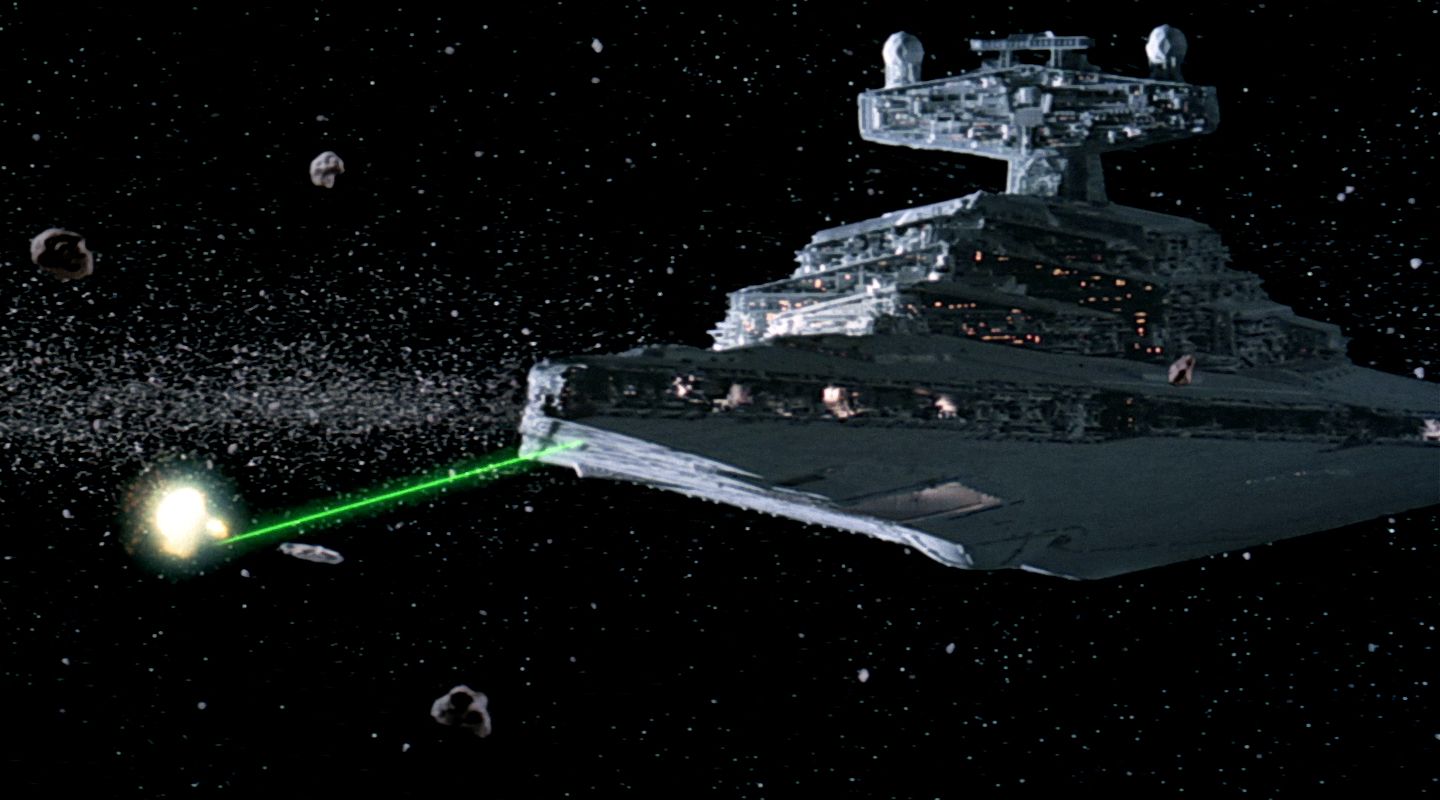 Whatever the number, Empire is Star Wars at the next level

I say all this just to underscore that in 1980, the ongoing success of the Star Wars franchise was anything but secure. And it all balanced on Star Wars Episode V: The Empire Strikes Back. It’s a burden that still rests (at least in part) on Empire‘s shoulders today in the 2020’s, and the film shows no signs of fading.

The story begins with the ice planet Hoth, Luke Skywalker and his noble mount called a tauntaun. It then smacks us square in the face with Luke being attacked by a wampa and dragged off to be eaten. Luke escapes into the snowy night, is rescued at the last moment by Han Solo, just in time for the Rebels to realize that the Empire has found them.

In one of the most iconic scenes in sci-fi history, Darth Vader is re-introduced, in command of an awesome fleet of star destroyers. We thought he was bad when he choked an Imperial officer on the Death Star in A New Hope – here we see Vader execute an admiral, in front of his troops, using the same method. This isn’t a kindergarten-friendly Darth Vader – this dude is evil. And we love it.

Imperial forces land on the ice planet Hoth and overwhelm the Rebel defenses with their terrifying AT-AT walkers, Luke Skywalker leads a desperate counter-attack but is forced to flee in his X-Wing. Han Solo, Princess Leia, Chewbacca and C-3PO escape in the Millennium Falcon, chased by TIE fighters through an asteroid field. They eventually escape and seek refuge at Cloud City with Han’s old friend Lando, but it turns out to be a trap and Darth Vader, led there by bounty hunter Boba Fett, captures them. Han is frozen in carbonite and given to Boba Fett, so that the bounty hunter can collect the reward offered by Jabba the Hutt.

Luke, meanwhile, has reached the secret planet Dagobah and has been training to be a Jedi under the wise Jedi Master Yoda. But Luke abandons his training to try and rescue Han and Leia, walking right into Vader’s trap on Cloud City. Luke and Vader face off with light sabers but the Sith Lord proves too powerful, cutting off Luke’s hand before revealing an awful secret: Darth Vader is Luke’s father.

Lando rediscovers his conscience and frees Leia, Chewbacca and C-3PO. They’re too late to save Han from Boba Fett, but they just manage to rescue Luke before he plummets to his death. Vader and his Imperial forces give chase to the Millennium Falcon once again, but R2-D2 fixes the hyperdrive and our heroes escape to the safety of the Rebel fleet.

As the credits rolled, audiences were stunned. The Empire Strikes Back was a darker, more intense, more dangerous movie than its predecessor – and it ended with the bad guys totally winning! But no-one could argue with the greater complexity of plot, richer characterization (including romance between Han and Leia), wider vision of the galaxy, deeper sense of the Force, and the sheer spectacle of the film. If anyone thought Star Wars was a one-off, Empire proved them wrong.

How does The Empire Strikes Back stack up?

But is The Empire Strikes Back actually a good movie? Putting aside all the hype surrounding it, and even looking back decades later when Luke’s parentage isn’t a shock, how does Empire fare?

The initial reaction to The Empire Strikes Back

Looking back 40 years later we know how everything in the Original Trilogy turns out in the end, but think about the shocked reaction from fans back in 1980. Some people even said that the film didn’t have an ending, and there was a lot of angry backlash. Empire also took what had been a fairy tale and turned it into a nightmare – Imperial victories, creepy swamps, spooky caves, the horror of carbon-freezing and some genuinely badass villains. This movie was the dark side to A New Hope‘s light.

Although widely praised and a huge box-office success, The Empire Strikes Back was a controversial film in its day, much like The Last Jedi today. 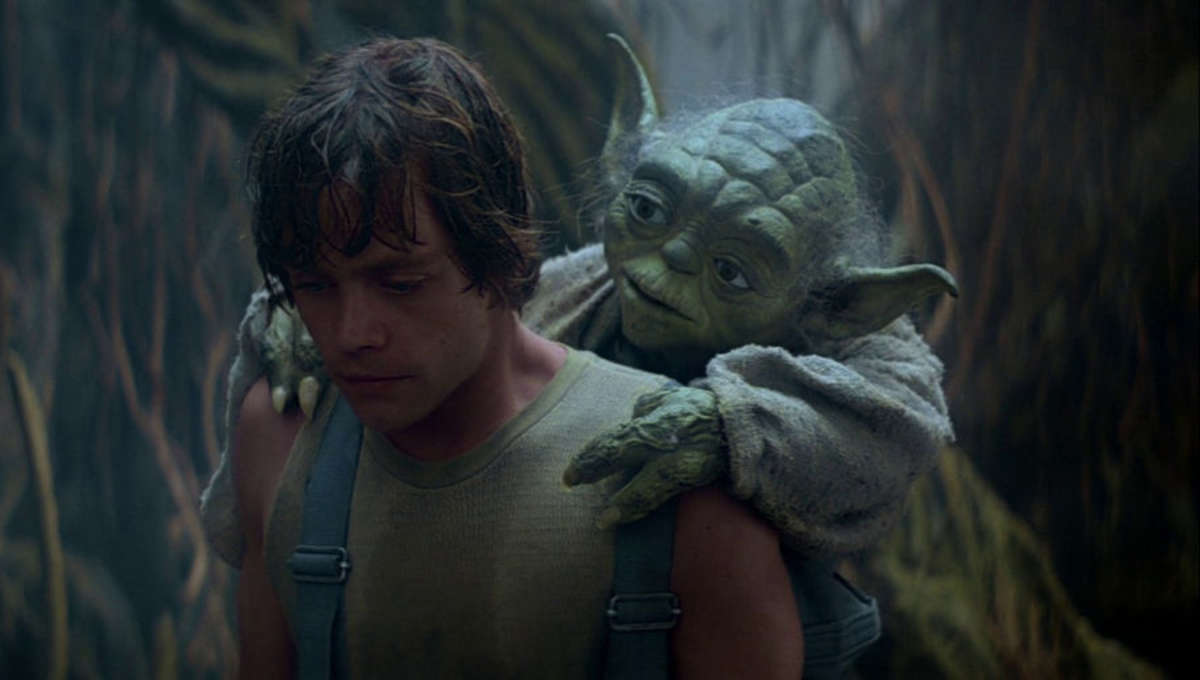 The Empire Strikes Back… 40 years later

But as time marches on, the genius working at every level of Empire has become clear. It is a tightly written movie that grabs a hold of you in the first moments and never lets up. There’s darkness, yes, but also heroism and some of the funniest moments in the saga. The story discards some of the campiness of A New Hope and replaces it with genuine danger, and by the end there’s no doubting that Darth Vader is a terrifying movie villain. No Star Wars villain ever reaches that level of Dark Side awesomeness again (which is why the epilogue in Rogue One is so epic, where we get to see Darth Vader unleashed one more time).

Today, The Empire Strikes Back is widely considered the best movie in the franchise.

Star Wars: the next generation

But the film is more than 40 years old. What does the new generation of fans think? I first showed Empire to my kids when they were 4 and 5, which in hindsight was a big mistake because it has too many scary parts for little kids. I can’t really consider it a parenting win when both my boys have run crying from the room and we haven’t even reached the “I am your father” moment.

So be warned. You might love Empire, but your kids better be able to handle the intense, creepy and violent scenes that it offers up. 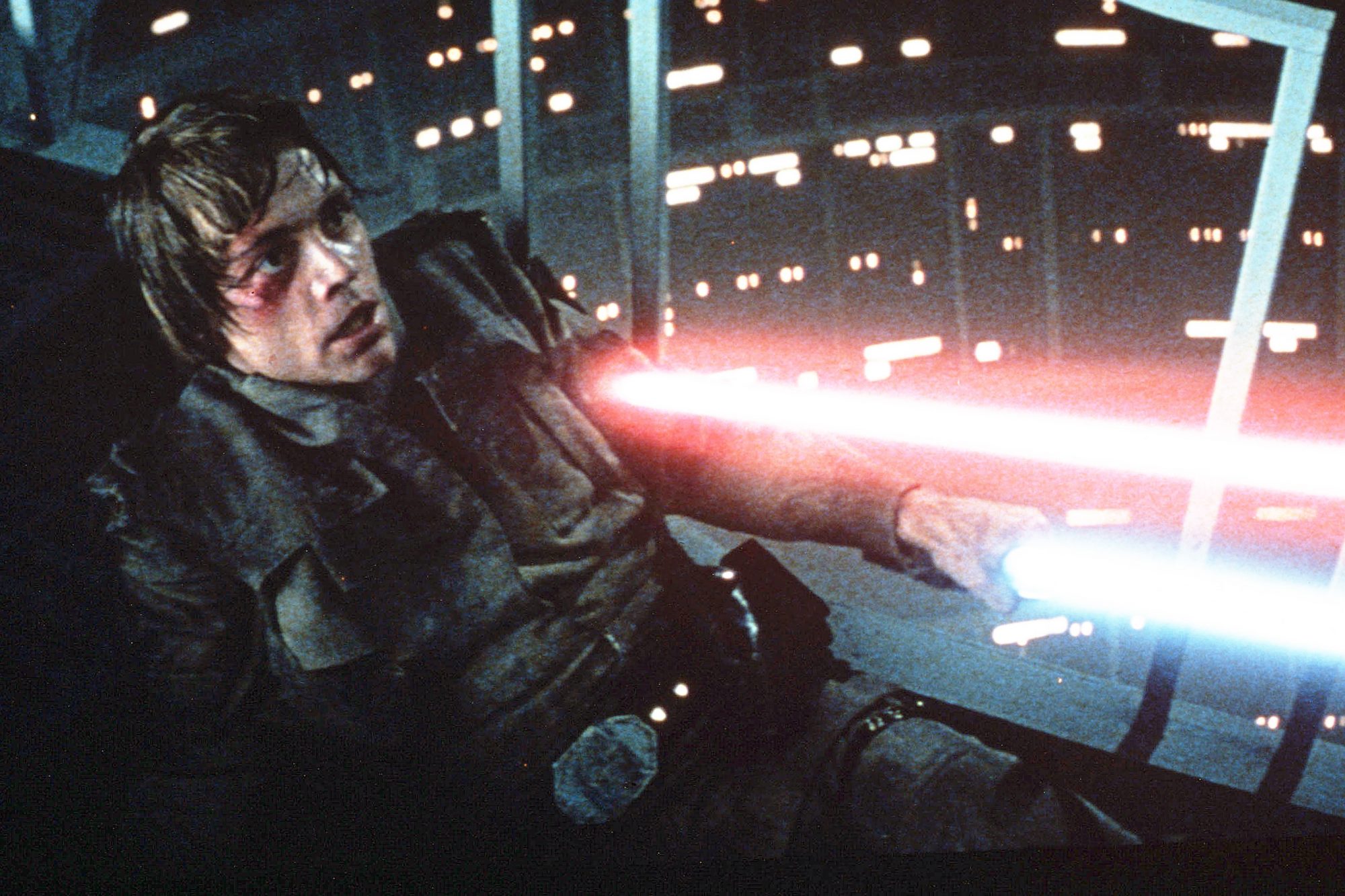 The Empire Strikes Back is “grown-up” Star Wars

But this is, most fans agree, exactly what makes Star Wars Episode V so good. Phantom Menace is widely criticized for pandering too much to the kids and not giving the adult audience anything to enjoy. Even Revenge of the Sith, which theoretically has the darkest storyline of any Star Wars film, wasn’t willing to commit to serious drama and still comes off as a lightweight. Revenge of the Sith spared us silly jokes, but it plays out like it was afraid to tell its own story properly.

The Empire Strikes Back had no such hang-ups, and it pulls us in so completely that we feel like we’re there. From the ice planet Hoth to the swamps of Dagobah to the asteroid field to the wonders of Cloud City, this film feels real. The plucky courage of the rebels makes us cheer. The romance of Han and Leia resonates in our hearts. The Jedi training by Yoda is poignant and thought-provoking. Darth Vader is evil, Boba Fett is cool, Lando is charming – and we believe all of it.

Maybe Empire isn’t great for little kids, but older kids can certainly enjoy it. And adults will watch it and be swept away. This film is the sort of “grown-up” Star Wars that many of us long to see – a story that delivers deep, complex and controversial ideas through realistic characters and fantastic settings.

Star Wars: The Empire Strikes Back sets the bar high – and we want more like it

Star Wars has always been for the kids, but as that first generation of kids (like me) has grown up, we’re eager for new content that feeds us as adults. The Empire Strikes Back proves that Star Wars is capable of delivering, and the failure of the Prequel Trilogy to do so is one of its biggest criticisms. The Last Jedi made a good attempt to subvert expectations and explore mature themes but it was left hanging by a lack of cohesion in the Sequel Trilogy.

(I acknowledge that Mark Hamill doesn’t really like the idea of a hermit Luke Skywalker who wants the Jedi to end, but you have to admit it was a pretty cool concept to explore. And this is what makes good drama: a noble man falls from grace, leaving the galaxy in danger, but then redeems himself with the ultimate sacrifice. I mean… that’s solid stuff.)

Many Star Wars writers get this, I think, and we see hints of Empire‘s maturity in some episodes of Clone Wars and Rebels. The Mandalorian is in a great position to do the same, and with so much new content on the way Disney has the perfect opportunity to tailor at least some shows and films to an older audience.

But until something better comes along, The Empire Strikes Back still sets the bar for what Star Wars can achieve.