The AT-TE: The Best Weapon in the Clone Wars

Every now and then a military design comes along which revolutionizes the battlefield. AT-TE’s were the mainstay of the Grand Army of the Republic and it can safely be said that the Clone War would have been lost without them. Let’s take a look at this most successful of war machines.

Say Hello to the All Terrain Tactical Enforcer

Officially designated the All Terrain Tactical Enforcer, the AT-TE was introduced at the start of the Clone War and served with few modifications throughout the conflict . This walker was designed as a tank and an armored personnel carrier (APC), performing brilliantly in both roles. It could punch through enemy lines with superior firepower and deliver twenty troopers into combat in relative safety. 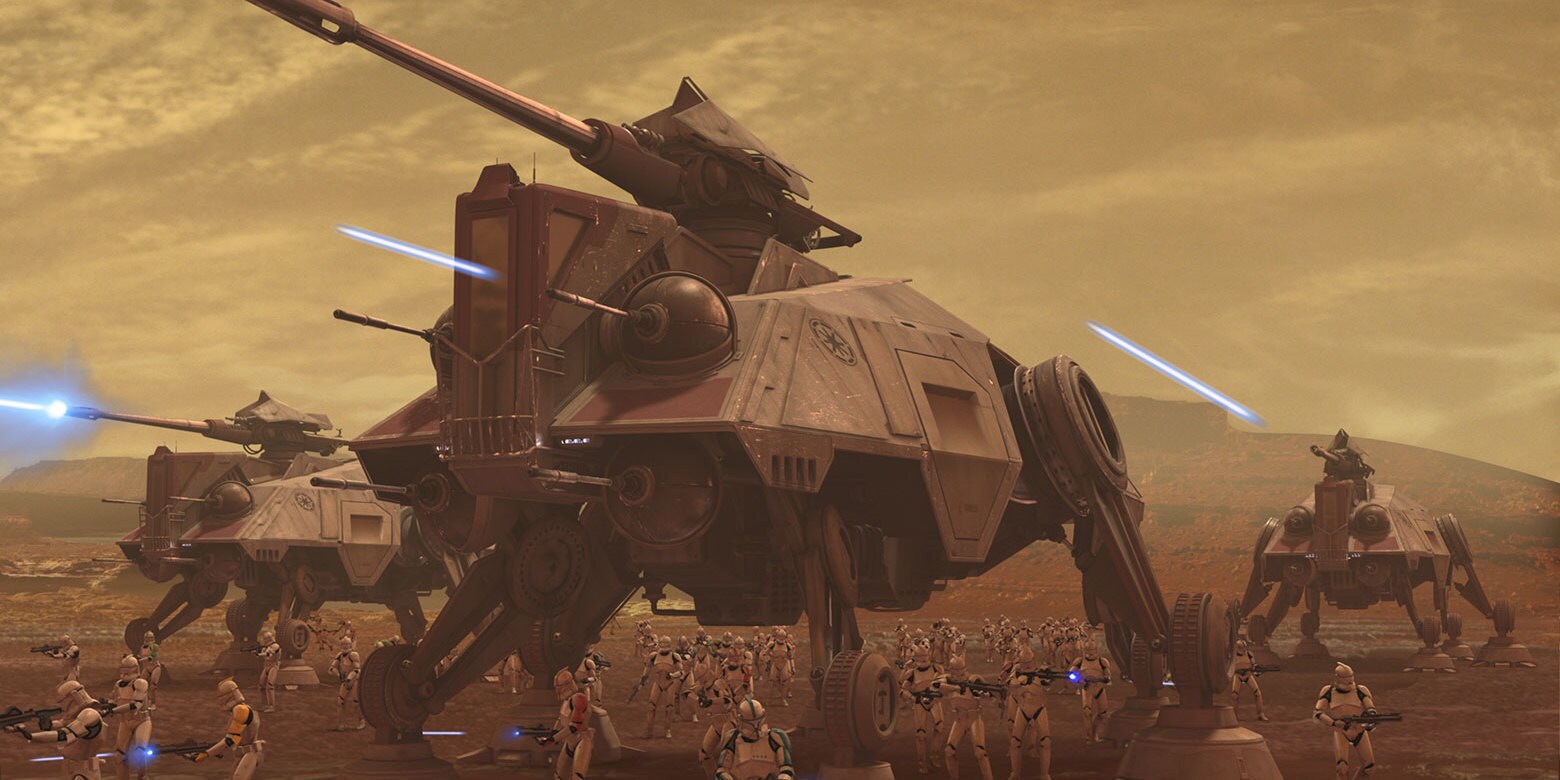 With six laser cannons providing complete coverage around the vehicle and armor strong enough to repel all but the most powerful Separatist projectiles, this brute was a relentless fighting machine.

Serving as powerful tank/APC was useful, but the AT-TE didn’t stop there. It also had artillery capability with a huge, mass-driver cannon mounted atop its hull that, although slow to fire, delivered devastating firepower at long range.

Additionally, if the rear compartment was so designated, this walker could store smaller vehicles like AT-RT’s or speeder bikes, providing incredible battlefield flexibility. These many features make it clear why this walker was a favorite among clones and remained at the center of Republic tactical plans throughout the war.

How tall is an AT-TE?

Compared to later AT models, the AT-TE might look small, but it was a brute in its day. The walker stood 9.57 meters in height and was 22 meters in length, dimensions big enough to act as a command platform or even field medical station.

The number of different ways the AT-TE was used in battle is extraordinary, and can account for why it changed so little in design. Its six legs made it truly “all-terrain” and provided stability that wheeled vehicles lacked. These legs could even be weapons themselves, and with no repulsor lift to hinder it, it could march right through enemy shields and have smaller units follow.

Magnetic clamps gave the tank the ability to scale sheer surfaces and even, thanks to an ingenious Jedi general named Anakin Skywalker, to operate in space. Although never designed for this function, the pressurized hulls and magnetic feet enabled a squadron of AT-TE’s to drop from their Republic cruiser and land on top of a Separatist vessel to deliver a nasty surprise.

They even used their artillery cannons to attack a Separatist dreadnought from afar, hiding behind the particles in a ring system and firing on the ship from behind.

Did the Empire use the AT-TE?

With all the information available to military planners, you’d think that this most successful of vehicles would continue to serve the Empire. I’m sure any clone trooper with any hours with this tank would have said, “yes, please” if asked. But unfortunately nobody was asking, as the clones were decommissioned and discarded almost immediately.

Also, the new Imperial planners had a clear obsession with size, and an attitude of “bigger is always better” took over the design philosophy. The successor in the AT set of armored vehicles was the AT-AT, or All Terrain Armored Transport. Although intimidating – and definitely one of the most iconic Star Wars products of all time – the AT-AT wasn’t as superior as its designers might have hoped.

It kept some features from its smaller predecessor, such as heavy armor, laser cannons and the ability to transport both troops and scout vehicles, but it suffered from decreased mobility and famously poor stability. (No Rebel speeder could have tripped an AT-TE with harpoons and tow cables…)

I suppose the only way to know for sure which AT is better would be to have them square off against each other. But that could never happen… Oh, wait! Star Wars: Rebels was kind enough to give an account of the only known combat between old and new. 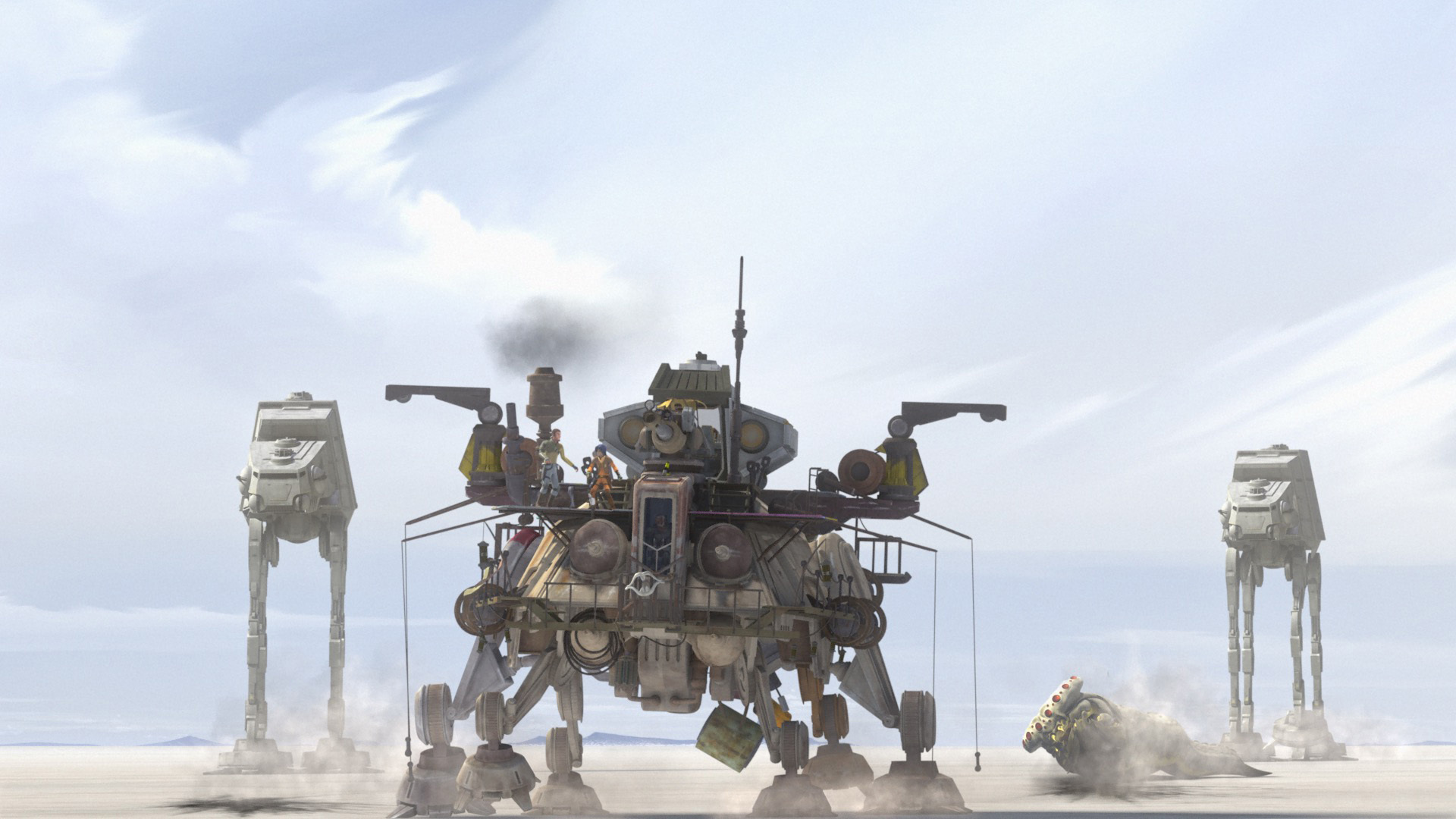 I realize that the clones had a couple of Jedi helping them, but the Scrap on Seelos showed how the maneuverability of the AT-TE, combined with its big mass-driver cannon and tough-as-nails armor, gave it the advantage over the lumbering AT-AT’s. It was able to absorb the laser cannon fire and get in close enough to fire at the AT-AT’s weak point.

Yes, there were some unfair advantages for the old tank. But had there ever been a straight-up fight between an entire squadron of fully equipped AT-TE’s and a squadron of AT-AT’s, my money would be on the older model. AT-TE’s rule.