By Bennett ColesPublished On: May 16, 2021Categories: Star Wars Characters2 Comments

They say that youngsters raised in very controlling environments rebel the hardest when they grow up. Star Wars gives us one of the best examples of this in Jedi padawan Barriss Offee. A character of little depth initially, she grows into one of the most controversial figures in the entire Clone Wars series.

Barriss was a Promising Padawan

We first see Barriss in Attack of the Clones, as the only apprentice attending an important meeting between Chancellor Palpatine and senior Jedi. She also joins her master, Luminara Unduli, at the First Battle of Geonosis and is one of the few Jedi to survive the lightsaber versus droids carnage in the arena.

In case you’re lost, she wears a black dress and hood and carries a blue lightsaber. Her skin is yellowish-green with a dotted tattoo across her nose and cheeks. Not a lot to go on, but like so many Jedi characters, it isn’t until The Clone Wars that we learn who she really is.

The Depth of Character in Star Wars: The Clone Wars

We next meet Barriss when she and Master Unduli join Anakin Skywalker and Ahsoka Tano for a dangerous mission during the Second Battle of Geonosis. Right away we see the different relationships between master and apprentice, with Anakin and Ahsoka openly bickering while Luminara and Barriss speak with calm certainty that suggests a disciplined relationship.

Barriss and Ahsoka are tasked with sneaking into a weapons factory. Barriss has memorized the two hundred junctions of the catacombs beneath the factory, but when the plan goes sideways it’s Ahsoka’s ability to improvise that brings success. Of course, in typical Skywalker/Tano style, the improvisation causes the entire fortress to collapse.

You’re about to die: please explore your life choices

As they lie buried beneath tons of rubble, Ahsoka and Barriss reflect on the way they were trained. Barriss, in particular, begins to question her choices – something she’s never done before. Perhaps this dark event is what later led her into deeper darkness.

Barriss and Ahsoka have several adventures together, including a nasty mind worm infestation aboard a ship with clones. They take to each other as new friends, though too often the war intervenes to separate them.

What’s the Relationship Between Barriss and Ahsoka?

Ahsoka and Barriss become friends as the pages of The Clone Wars story unfold. As a Jedi, Barriss is supposed to avoid making personal attachments, but it’s hard to resist an effervescent personality like Ahsoka’s. Imagine the bookworm nerd who suddenly has the chance to hang out with the popular cheerleader.

We can only guess at their interactions off-screen, but they would have been many and Ahsoka became a strong influence on her friend. Ahsoka questioned everything, and Barriss might have been swept along with new ideas. There could have been many dark nights in the Jedi Temple where Barriss agonized over her former black and white view of the Force and the Jedi.

No longer content to follow the strict Mirialan teaching of Jedi Master Luminara Unduli, and the rigid “follow us without question” philosophy of the Order, Barriss eventually began to question, well, everything.

How much did Barriss and Ahsoka explore together?

Any Google search for these two padawans reveals that Star Wars fandom has all kinds of theories about the exact nature of their relationship. I’ll not comment too much, other than to say that Ahsoka certainly considers Barriss a close friend by the end of the fifth season of Star Wars: The Clone Wars. 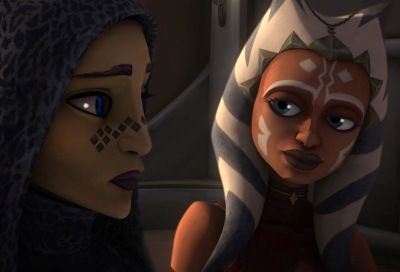 Barriss makes appearances throughout Star Wars: The Clone Wars. She becomes more diverse in her skill-set, and the original, bookish image is left behind as she pilots a starfighter and leads a clone force into battle. Whether she lost her interest in study or was just forced to help the Republic in a more active way, Barriss begins to change.

Trouble at the Jedi Temple

A bombing at the Jedi Temple brings Anakin Skywalker and Ahsoka Tano back to Coruscant to lead the investigation. Ahsoka and Barriss meet up and share their concerns. The investigation focuses on how such an attack could even be made, but slowly information points toward Ahsoka as the bombing mastermind.

Ahsoka is charged and, in a disgraceful sign of how far the Jedi have fallen, ejected from the Order to stand trial before the Republic. Anakin is the only person who believes her and he continues to investigate, eventually meeting Asajj Ventress and learning that the former Sith is also a victim. The true mastermind behind the bombing is Barriss Offee, who framed Ahsoka.

Anakin confronts Barriss in her quarters. Young Offee tries to talk her way free, but when Skywalker takes her blue lightsaber she grasps the two red ones she stole from Ventress. What follows is one of the most epic duels in Star Wars: The Clone Wars, with Barriss showing what’s she’s made of before Anakin is finally able to take her down and bring her to justice.

Why did Barriss Offee Betray the Jedi?

The fact that she framed Ahsoka Tano is not cool, but otherwise Barriss Offee is a sympathetic character. Her education taught her about the Jedi Order as it was long ago, surviving dark times without compromise. In this war, however, she feels that the Jedi have lost their way – and indeed have been betrayed by the Republic. She feels that the Jedi have embraced war far too enthusiastically, and sees it as a sign that the Jedi are as corrupt as their political masters. The Temple bomb is her protest.

Is Barriss Offee good or bad?

Star Wars often portrays good and evil in simple terms, but Barriss defies such a label. For the purpose of the drama she’s the villain of these episodes, but is she really wrong? Ahsoka’s own character journey shows how the war has changed what it means to be a Jedi. The war has forced the Jedi Order to change, and has revealed the broken, conservative complacency in what had once been a source of light.

In the age of rebellion, Barriss would have been a hero

Barriss makes a bad choice in resorting to terrorism, and the betrayal of her best friend Ahsoka is unforgivable, but is she really that different from Saw Gerrera, Cassian Andor or any other “freedom fighter” who uses violence? Left with no option, and no longer content to fight droids or go along with the hypocrisy, she abandoned black and white, and opened a new page. Her attack might seem to have come out of the blue, but maybe she was just ahead of her time.

How did Barriss Offee die?

There’s no canon reference to the fate of Padawan Offee. We know that she was arrested for the Temple bomb, but beyond that it’s pure speculation. She may have been in prison during Order 66, but her status as a former Jedi could have led to several outcomes. She might have been targeted, just as Ahsoka (another former Jedi) was, or she might have been made a very interesting offer…

Is the female inquisitor Barriss Offee?

Some Star Wars fans have suggested that Barriss is the Sith inquisitor Seventh Sister we meet in Star Wars: Rebels. This is a fascinating theory – but is canon evidence able to support it?

Supporting the idea, Barriss Offee and Seventh Sister are both Mirialan, and they’re about the same age. Their face tattoos are similar, and although Sister’s accent is different from Offee’s, the descent into the Dark Side can bring subtle changes. Both women are powerful Force users, and it’s not a big stretch to imagine the cold confidence of a fallen Barriss transforming into the seductive sadism of Sister.

Opposing the idea, however, are a few things. Most notably, Ahsoka doesn’t seem to recognize her old friend when she faces off against Seventh Sister, nor does Sister offer any familiar comments. Barriss was also skilled enough with a lightsaber to fend off Anakin Skywalker, but Sister appears at best competent with her blades.

Finally, we know how Seventh Sister dies, and it’s not satisfying if she’s indeed Barriss. The fate of Barriss Offee should lie in the hands of Ahsoka Tano. Star Wars guru Dave Filoni hints that we haven’t seen the last of Barriss, so we can only hope that’s a sign that she’ll make another canon appearance in the upcoming TV show Star Wars: Ahsoka.