The Zillo Beast: The Godzilla of Star Wars

By Bennett ColesPublished On: May 30, 2021Categories: Star Wars creatures0 Comments

There’s an old adage in the military that says, “no plan survives contact with the enemy.” I’m sure that Jedi veterans Mace Windu and Anakin Skywalker knew this and, during Clone Wars Season 2 Episode 18, at the Battle of Malastare, they knew they were taking a risk by deploying a prototype bomb against Separatist forces.

But I don’t think anyone predicted the poodoo show unleashed on that particular day.

The Republic was on the planet Malastare to save the native dugs and they used an electro-proton bomb to destroy the droid army. It worked, but it also awoke a Zillo Beast, a monstrous creature the dugs had thought killed off long ago.

At first, two Jedi and some clones decided to search the massive hole their bomb created, but soon realized they weren’t alone. The Zillo Beast was over three hundred feet tall, ignoring blaster fire and  immune to lightsaber strikes. We’re talking the genuine article.

You’d think that, by this point in the war, Anakin must have learned new way to respond instead of attacking, but apparently not. This episode may have taught our brash young hero a thing or two about restraint, but not before the Zillo Beast emerged from its crater and devastated the Republic and dug forces. A beast, yes, but a monster?

Was the Zillo Beast an evil monster? The dugs claimed so, and in the heat of battle questions would have been hard to ask, but let’s examine the evidence. The Zillo Beast had been living in peace until its home was destroyed by the electro-proton bomb. It attacked Republic forces, but only because they attacked it first. It had no reason to use its awesome strength, unless it felt threatened by the series of armored vehicles ordered to fire at it.

If the Republic forces just pulled back, the Zillo Beast might not follow. But nobody asked the right questions, content to go with the dug account that defeating the beast must be the only way to save the site.

You think that put the Republic at risk? Hold my beer…

Through clever tactics and technology, the clones were able to subdue the Zillo Beast. Considering nothing they had could penetrate its hide armor, the next smart move would have been to order it pushed back down into its lair.

But no… Chancellor Palpatine ordered his troops to transport the creature back to Coruscant, so that his research teams could study it.

The evil of Chancellor Palpatine aside, I have to wonder at the leadership of the Republic. Because somehow they agreed that bringing the Zillo Beast to Coruscant was a good idea.

Was Palpatine scared of the Zillo Beast?

I don’t think Palpatine was scared of the beast (I mean, what is a Sith Lord scared of?). He was more interested in cloning the creature’s hide and turning it into lightsaber-proof armor and related military gear. But the creature wasn’t scared of him, either.

There was something between the Zillo Beast and the Chancellor, and it wasn’t good. The first sign of the creature’s sentience was the way it reacted to Palpatine’s presence.  It clearly sensed his evil, almost as if they shared a Force connection. How else do we account for the Zillo Beast actively hunting down Palpatine once it broke free of its containment?

One of those great moments in Star Wars: The Clone Wars

And yes, it did break free. And rampaged through the city like a Star Wars version of Godzilla. It was an awesome moment, as the illusion of control was shattered and chaos descended on civilization.

It was awesome also because of the swift military response. The Jedi were there, of course, but if they were going to save the civilian population they needed the Grand Army.

Just imagine yourself a clone trooper on garrison duty in the Federal District of Coruscant. Action is the last thing you expect, and in a galaxy at war this is the one time you know you can sign out and log off.

And then the alarm sounds. There’s an attack in the city! Droids? Rebels? No… a 300-foot long creature that’s chewing up train cars and flinging shuttles. And it’s already taken down more than its share of troopers. Oh, and its hide is unaffected by blasters. Good luck.

A good trooper will of course follow the order to charge in, especially when it’s to save Coruscant, but man, I bet there were a few hangovers being nursed under those buckets. 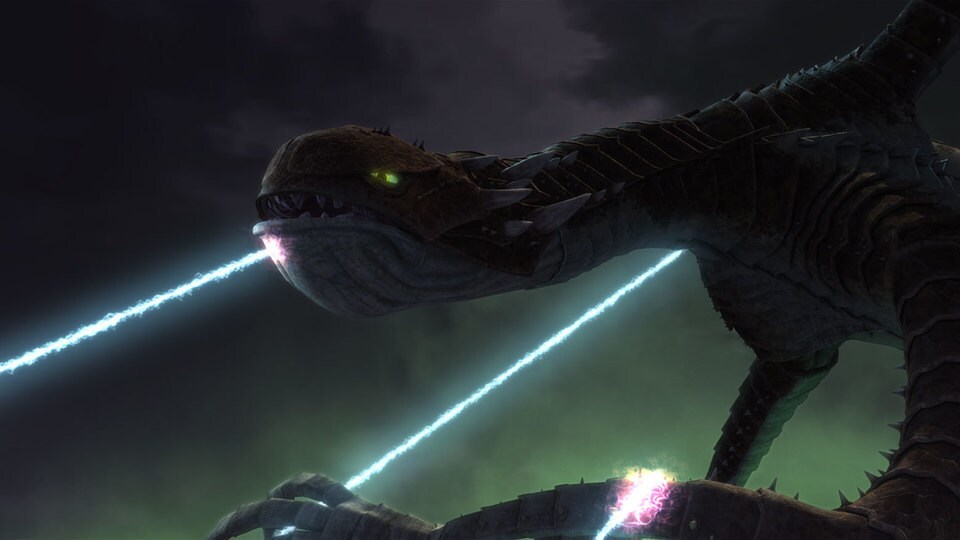 Did Palpatine clone the Zillo Beast?

As of 2021, there’s no canon account of what happened to the Zillo Beast after it was killed. Clone troopers never got armor capable of deflecting lightsabers, so Palpatine’s primary use for the creature’s hide didn’t pan out. But there are other uses for a monstrous beast, if your plans are to sow chaos in the galaxy, and who’s to say Palpatine didn’t save the beast’s body and even work a bit of that monstrous DNA into in his various experiments.

We never see the Zillo Beast in the Star Wars movies, but a single comic reference suggests that Kylo Ren killed one. Looking at the 2021 upcoming content, there must be possibilities. With Boba Fett in control of Jabba’s palace, it might please him to have a Zillo Beast replace the rancor in the basement. Or maybe Obi-Wan or Ahsoka would top their Clone Wars companions and actually talk to the beast instead of attacking it.

With something this cool, and a galaxy this big, there are always possibilities. Time will tell.