The Porg, Star Wars and the Delicate Art of Merch

When a movie company finds itself with a hugely popular film series, the temptation to profit from that through merchandising can be irresistible – and understandable. But it’s a fine line between taking the best elements of the movie and turning them into toys or collectibles, and building your movie around stuff you want to sell.

As an example, I give you the porg. 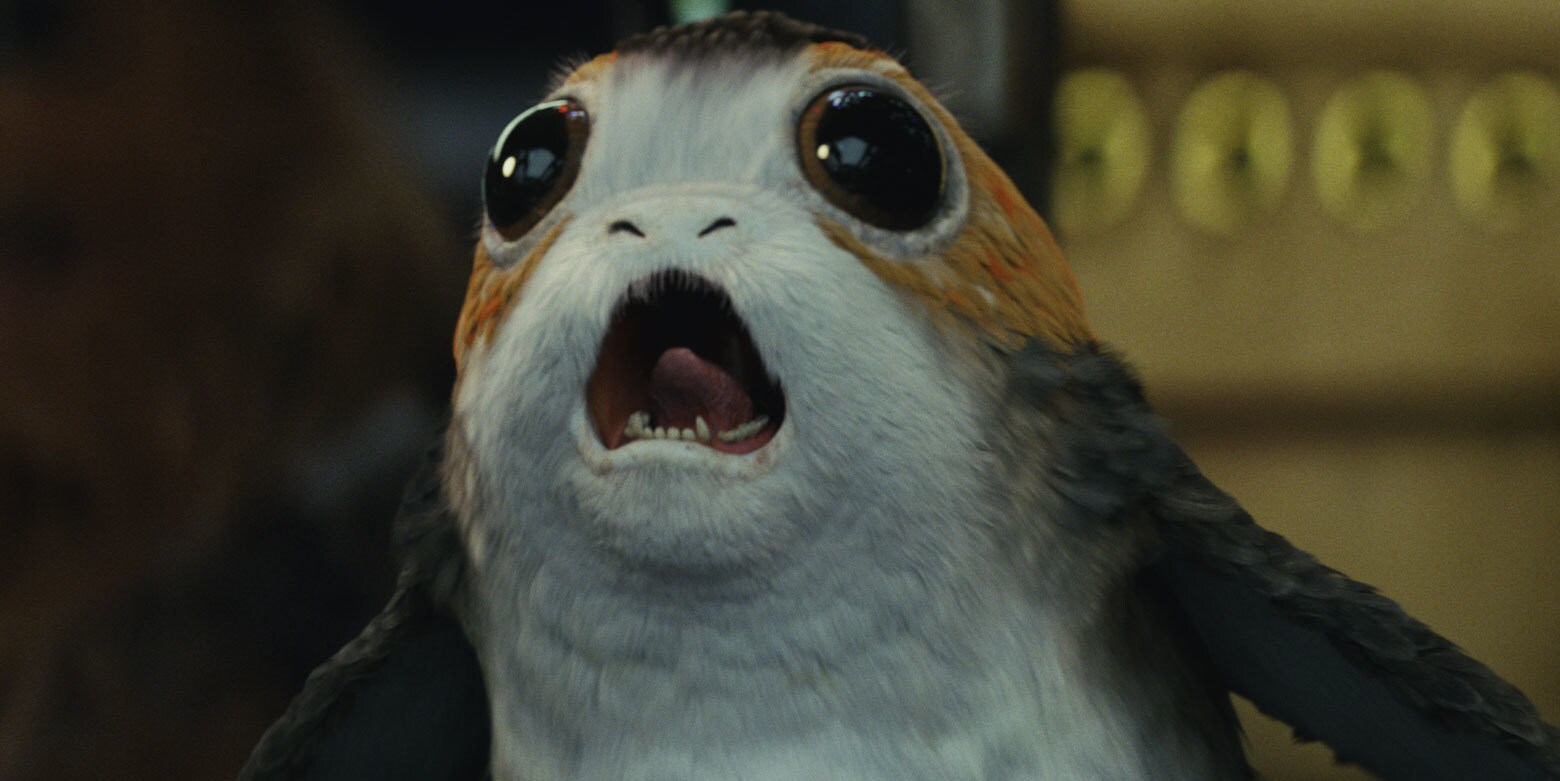 But think of the kids!

I’m going to date myself here, but I was four years old when the original Star Wars movie was released, and I had tons of action figures as a kid. My favorite Christmas present ever was the Kenner Millennium Falcon, and I even had a stuffie Chewbacca. So I get it – making toys based on that galaxy far, far away was an inspired move by Lucasfilm, and it made my childhood much happier.

So what’s the big deal about porgs? Surely Star Wars: The Last Jedi has enough dark and epic stuff in it to warrant a few light-hearted moments with some cute, little critters? The kids love ’em! And if Lucasfilm wants to make a bit extra by making adorable, plush, toy porgs available for sale, who can begrudge them that?

Fans who want a tight, meaningful movie, that’s who.

Star Wars: The Last Jedi – Controversial to the end

The Last Jedi is perhaps the most divisive film in the entire saga. Plenty of folks complained about Phantom Menace, but we were mostly united in our hatred of Jar-Jar. Attack of the Clones has more than its share of detractors, too, but we’re pretty universal in our criticism of the terrible dialog and wooden acting (which is less a criticism of the actors, by the way, than the material they were forced to slog through).

What makes The Last Jedi fascinating, though, is the fact that it gets criticized for all kinds of things – and some of those things are deal-breakers for some fans and top moments for others. Snoke getting killed off is either a cop-out or a terrific twist. Poe getting smacked down by Haldo is either PC run amok or brilliant social commentary. Luke Skywalker the hermit is either a betrayal of the ideals of the Jedi or a bold new direction for the saga. Rose is either great or not.

You’d think, with all this meaty stuff to debate, Star Wars fans would ignore the cute creatures that live on Luke’s island on Ahch-To. But no. Porgs are central to the debate of what went wrong with The Last Jedi and why Disney sucks.

Porgs are a lightning rod for discontent

For the record, I actually quite like The Last Jedi. It’s not perfect, and it would have been a lot more perfect if the whole Canto Bight subplot had been ditched and the Finn-Rose duo had been given something better to do in the second act. But for the most part I enjoyed the film and happily revisit it on video from time to time.

I also like Disney. They usually make great content which I can enjoy on my own or with my kids.

But the porg issue speaks to a bigger problem with the entire Disney trilogy: the people in charge of these movies didn’t really understand what made the original trilogy so great.

Could Disney bring Star Wars back into balance?

When George Lucas sold his franchise to the Mouse House there was a lot of speculation, but I for one had hope. The Prequel Trilogy, over which George Lucas maintained tight control, had disappointed and maybe it was time for someone new to take over George’s epic vision. Also, Disney has a great track record of making films that people of all ages can enjoy, and with the image of Jar-Jar still burning behind my eyes I was optimistic that Disney would find a better balance.

When the credits to The Force Awakens rolled, my first emotion was relief: that episode did not suck. BB-8 was a lovable fella but he was also helpful to the plot, so I took that as a sign that Disney was on the right track. There was no character in The Force Awakens who seemed an obvious play to drive people into the Disney store. And then Rogue One was released, and Disney seemed to have really hit their stride.

Attack of the Porgs

But then December 2017 came along and my family took our seats for Star Wars: The Last Jedi. The re-appearance of Luke Skywalker on Ahch-To, the mystery of Rey’s heritage, the sights and sounds of Star Wars – it was all about to arrive. And what did we get? Porgs.

Don’t get me wrong. These little creatures are funny, and they do provide some wonderful moments in the film. But pretty soon I could see that the number of scenes they were in was climbing, even as they offered less and less to the story. Chewbacca has a magnificent scene where he’s killed a porg, plucked it and roasted it over an open fire – and then has to face down a bunch of porgs staring at him in shock. That was it. That was their big punchline. If the presence of porgs had ended there, all would be well.

Revenge of the Porgs

But no. Next thing we know the porgs are nesting in the Millennium Falcon, and Chewbacca even has a new friend riding shotgun with him for the final battle, tiny wings flapping as it squawks for a cheap laugh.

The porgs serve no purpose at that point in the film, but I guess the merch people decided that their new, cute creatures hadn’t had enough screen time to solidify the audience’s resolve to rush to the store or search their favorite online site to buy this must-have souvenir.

Contrast that, if you will, to the crystal critters in the same sequence. At first glance those fancy foxes serve no purpose other than to add some local color for Crait, and maybe create a new merch opportunity (I know they were my son’s favorite creature in The Last Jedi). But the crystal critters also served a vital plot point, showing the secret escape path for the Resistance to follow. So the crystal critter who leads our heroes to safety earns his moment, unlike the porg in the cockpit. 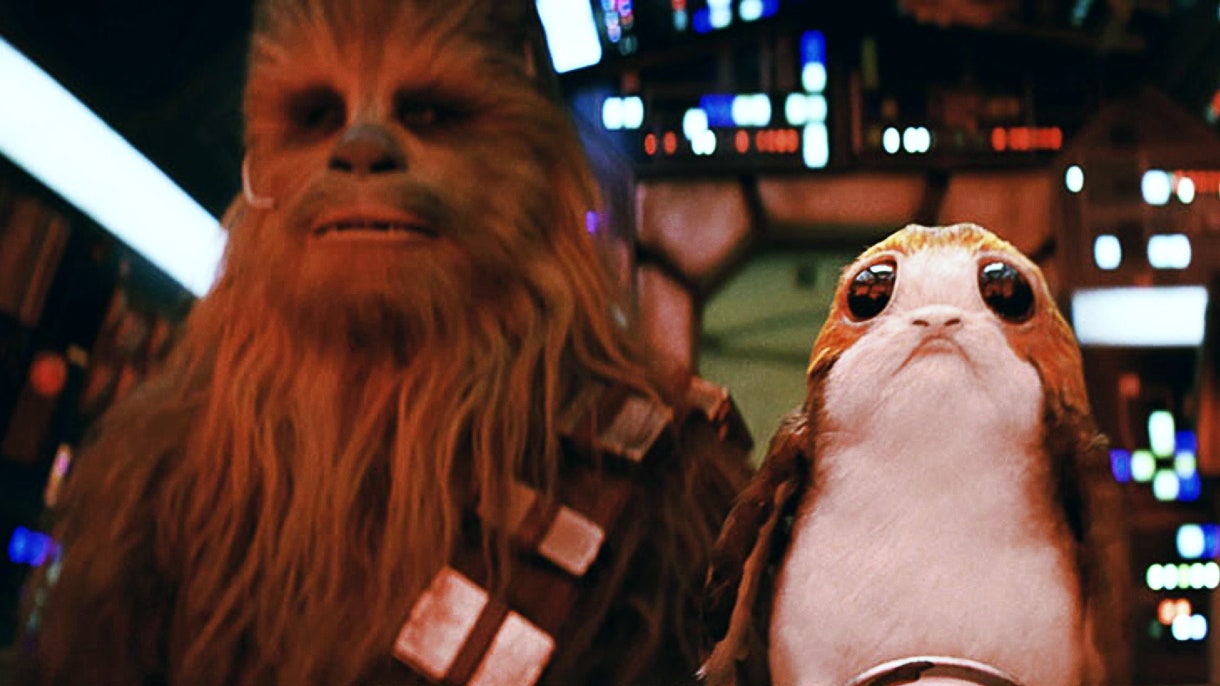 As an aside, even the scene where Chewbacca has set up a BBQ at the Falcon‘s landing site, the porgs could have served to develop character. It’s been hinted throughout the saga that Chewbacca is a badass, scary individual if you cross him, but except for that glorious moment in Solo when he rips a guard’s arms off, we really don’t see it.

The porg BBQ moment could have been better, and more in keeping with the dark undertones of The Last Jedi, if Chewie and stared right back at those whimpering avians as he ripped a wing off his first porg and started chowing down. That would have created a bit of conflict, especially if our heroes then needed the porg colony for some reason, but they scattered in fear whenever they saw Chewbacca.

Instead, the BBQ standoff is forgotten, all appears to be forgiven, and for no good reason Chewie has a porg with him in the cockpit.

In good story-telling, everything has a purpose

This is what Disney so often missed about what made the original Star Wars trilogy so great. Sure, there were plenty of cute things in those episodes – R2 and 3PO, jawas, ewoks – but every one of those cute things served the story. The droids were main characters. The jawas were the reason the droids met Luke, and thus started the whole adventure. The ewoks were at first a challenge for our heroes to overcome, then a crucial ally. 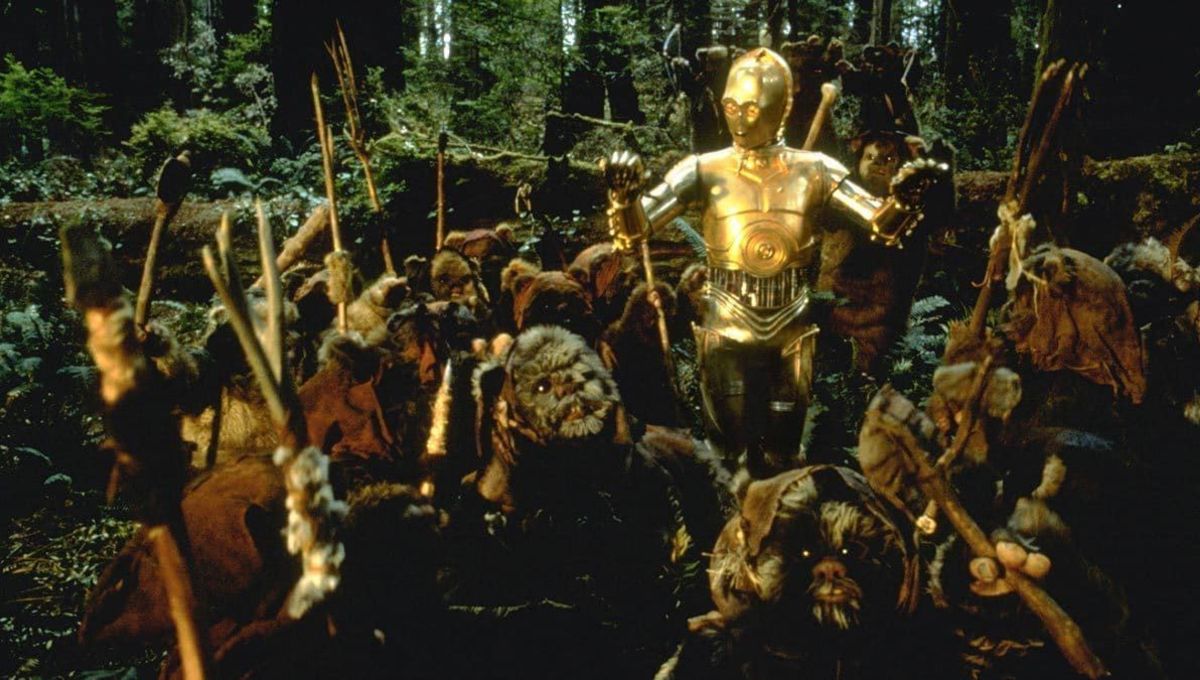 The porgs… Well, they were cute.

I get that creative decisions are related to merchandising decisions in that a film is only considered a success if it makes more money than it costs. But when new creatures, ships, characters or anything make an appearance in the story, they need to support that story in a meaningful way. If not, they should be edited out just like an extraneous scene.

Disney bought Star Wars because they knew they could make a lot of profit with it. Fair enough – I’m happy to spend my coin with them if they play fair and give me good stories in my favorite, far-away galaxy.

I’m even okay if they want to create porgs. Ahch-To needs to be fleshed out as a memorable environment, and I’m really not a bit upset with the funny moments like when the porgs nearly activate the lightsaber.

But if Disney wants to make the porg a big part of the episode, then the porg needs to play a vital role. Maybe, instead of going to Canto Bight, our heroes could have used porgs to make nests in the First Order electronics and shut down the hyperspace tracker. Not only would that have brought Rey and Finn back together in the second act (another big failing) but it would have given the porg a purpose, instead of just being another random thing thrown into the mix.

And this is the failure of the Disney trilogy I’d like to address. How many things did these three films introduce and then waste? Captain Phasma. Maz Kanata. The fact that Maz had the lightsaber that Luke lost at freakin’ Cloud City. Supreme Leader Snoke. The Knights of Ren. Rose Tico. The Force-wielding kid with the broom. Hell, why not add Finn? I’m sure a longer search would add more than just porgs to this list.

The Rise of Porg

The porg is just another example of something being introduced, given great fanfare in the marketing, given lots of screen time – but then ultimately adding little or nothing to the story. And with a bit of re-thinking, everything on my list could have been amazing, and could have added so much to the Star Wars saga.

Phasma could have been a real nemesis to Finn. Maz could have provided great wisdom and lore to tie the trilogies together (including why she had Anakin’s lightsaber).  Snoke could have been a new, terrifying villain in his own right. The Knights of Ren could have been a clear and present danger to our heroes. The kid with the broom could have returned to represent a new generation of Jedi. Rose and Finn could both have been interesting, dynamic characters who grew, changed and made a real difference to the story. Even the humble porg, if used thoughtfully, could have made a difference.

Sadly, none of that happened.

Porgs are fun, but they’re fluff. And unfortunately the same can be said for too much of the last three episodes of the Star Wars saga.