Star Wars is often about heroes, but it’s also famous for its villains. Darth Vader is one of the most recognizable figures in pop culture and antagonists such as Boba Fett, Darth Maul and General Hux have fan clubs all their own.

But one of the best villains is the infamous bounty hunter Cad Bane. Cad Bane: Another example of what makes Star Wars: The Clone Wars so awesome

Cad Bane was introduced in the opening episode of Season 2 of The Clone Wars, a mysterious figure hired to steal a holocron from the Jedi Temple. Already striking as a duros with blue skin and large, red eyes, he dominated his scenes with his growling voice, deadly swagger, and Western style. He was set up right away as a truly dangerous opponent, and then George Lucas did something unexpected: he actually let a secondary villain succeed in his task.

Despite all the efforts by the Jedi knights to foil him, Bane succeeded in pulling off the impossible and acquiring the holocron he sought. Normally in the Skywalker Saga any minor antagonist introduced to the story is just a prop to let the heroes succeed. But to everyone’s surprise, Anakin Skywalker, Obi-Wan Kenobi and the rest of the Order were left empty handed.

This was a most welcome surprise for viewers familiar with the Star Wars galaxy, and throughout the animated series Cad Bane would return to wreak stylish havoc.

Cad Bane: The top bounty hunter of his day

Bane was the preeminent blaster for hire in the last days of the Republic, infamous throughout the criminal underworld for succeeding at jobs everyone else thought impossible. With his custom twin blaster pistols, rocket boots and an impressive arsenal – to say nothing of his signature toothpick and wide-brimmed hat – this ruthless bounty hunter was a favorite hire for the Hutt crime families, Count Dooku and even Darth Sidious / Supreme Chancellor Palpatine.

Other bounty hunters were drawn to this killer from the planet Duro, and often Cade Bane led teams of goons, thugs and hooligans – many of whom are loved by Star Wars fans in their own right. 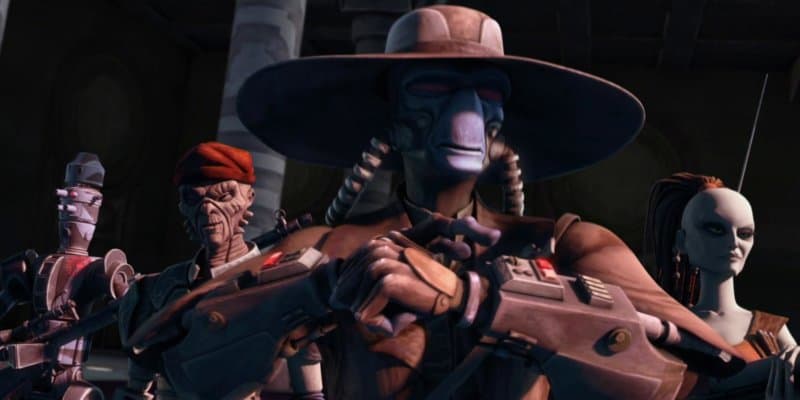 Perhaps the most interesting character Cad Bane crossed paths with was a young Boba Fett. A storyline in Clone Wars shows the young Fett teaming up with bounty hunters Aurra Sing and Bossk to try and take revenge against Jedi Master Mace Windu, the killer of Boba’s father, Jango Fett. Both Sing and Bossk are part of Cad Bane’s posse and Boba Fett crosses paths with the duros hunter.

The Clone Wars was cancelled by Disney after its fifth season and several intended storylines were never aired, including one where Cad Bane would have become Boba Fett’s mentor. At the 2017 Animated Origins and Unexpected Fates panel in Orlando, a rough version of the intended storyline was revealed, where Cad Bane and Boba Fett fought for supremacy of the gang in a Western-style duel. Both Bane and Fett are hugely popular and many fans regret never seeing this story on screen.

A skilled bounty hunter in her own right, Aurra Sing is another frequent thorn in the sides of our heroes. And while she’s certainly capable of acting on her own, whenever we see her with Cad Bane there’s no doubt that the duros is in charge. This deference from a bounty hunter as respected as Aurra Sing is a clear sign of Bane’s fearsome reputation.

A bounty hunter we first met in The Empire Strikes Back, Bossk is successful enough to survive in his career outside the law from the days of the Clone Wars well into the Empire, but in his episodes with Bane he comes across as a bit of a bumbler. Vicious and ruthless, to be sure, but clearly lacking the intelligence and cunning of the calculating Bane. No doubt this young bounty hunter from Trandosha benefited from his association with the top criminal of his day.

Over the course of five seasons of Clone Wars, Bane stole from the Jedi Temple, kidnapped Force-sensitive children, abducted C-3PO, took hostages in the Senate Building to force the release of Ziro the Hutt, broke out of prison and attempted to kidnap Chancellor Palpatine. He outsmarted Obi-Wan on multiple occasions, threatened to murder Ahsoka in order to force Anakin to give in, made Quinlan Vos look like a chump and ran rings around clone troopers. Even when the Jedi tried to interrogate Bane he seemed in charge of the situation.

He was, in fact, the ultimate bad guy at the grassroots, non-epic level. Yes, Darth Sidious and Count Dooku were the BIG bad guys, but even a Sith lord needs capable minions to do their dirty work. Cad Bane proved his worth consistently, and the sheer audacity of his jobs is breathtaking. From a dramatic perspective, any time Cad Bane appeared in an episode, you knew something awesome (and nasty) was going down.

What did Cad Bane do after the Clone Wars?

The last time we saw Bane in Clone Wars, he’d been captured by Obi-Wan after the attempt to kidnap the chancellor was foiled. No doubt Bane escaped from prison some time after that, and the next time we see him is in Season 1 of The Bad Batch, the new animated series starring the misfits of Clone Force 99. Bane is hired to capture Omega and lays a beating on clone trooper Hunter, proving once again just how dangerous a foe he is. Bane succeeds against the Bad Batch but his mission ultimately fails after fellow bounty hunter Fennec Shand interferes. 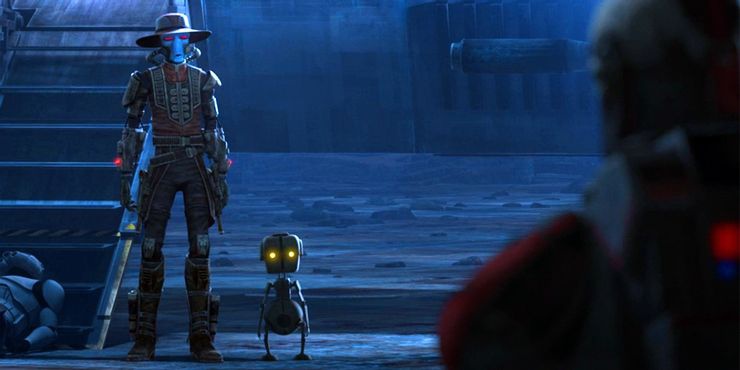 Bane never appeared in Star Wars: Rebels so we currently have no visibility on his life after The Bad Batch, but that doesn’t mean he wasn’t skulking through the galaxy leading scum and villainy. Since the duros race has been featured in live action since A New Hope there’s no barrier to bringing Bane to a show like Star Wars: Kenobi, especially since he and Obi-Wan have had many run-ins.

Will Cad Bane be part of the Book of Boba Fett?

But the most interesting possibility is that Cad Bane and Boba Fett will cross paths again. When Bane appeared in The Bad Batch he had a new plate on his head, possibly from his legendary duel with Boba Fett. The iconic dent in Fett’s helmet is said to be his reminder of that fateful day.

We already know from Clone Wars that Bane and Boba Fett have history, and The Bad Batch has shown us how Bane and Fennec Shand have crossed blasters in the past. Who better to come a’strolling up the dusty Tatooine street, with hat brim low and toothpick in hand, to cause trouble?