In the closing moments of Star Wars: The Rise of Skywalker, the newest member of that famous family, Rey, activated her new lightsaber. It was a golden yellow that glowed in the dry Tatooine air, her hilt brooding black with extra switches and slides. It looked cool, and was no doubt designed to cap that final, farewell moment for the Star Wars franchise.

But mostly what that lightsaber did, with its golden blade and black hilt, was create questions. Which is probably the most fitting end for a movie that provided no answers.

Where did Rey’s lightsaber come from?

The mystery of Rey’s lightsaber will probably never be fully resolved, because the Skywalker saga has drawn to a close, but that’s not going to stop us from speculating. I mean, that’s what Star Wars fans do, and the chaos of the Disney trilogy has given us more wreckage to work through than a Jakku scavenger. 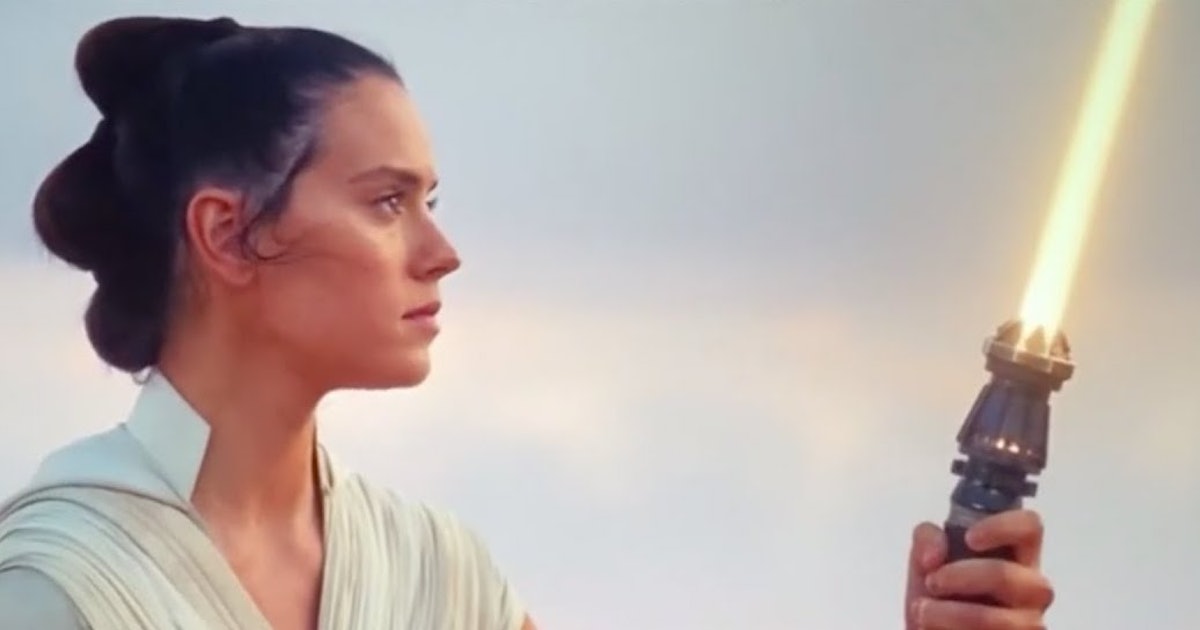 How many lightsabers did Rey have?

The yellow blade certainly wasn’t the first saber Rey ever wielded. The first lightsaber to fly into her hands (quite literally) was the weapon she’d dug up at Maz Kanata’s palace. They spoke of it as being Luke’s lightsaber, but in fact it was Anakin Skywalker’s. This blue-bladed saber was Anakin’s second lightsaber: the one he used throughout the Clone Wars and – let’s not forget – the slaughter of younglings during Order 66. The weapon was taken by Obi-Wan Kenobi after defeating Anakin on Mustafar and eventually given to Luke. I wonder if Darth Vader recognized his old weapon when his son ignited it at Cloud City? That lightsaber was lost when Vader sliced off Luke’s hand, and somehow found its way to Maz.

Rey got her hands briefly on Kylo Ren’s lightsaber during their duel on Kef Bir. It was only for a few seconds but it was long enough to skewer her foe with his own blade. Unlike during her first battle with Kylo Ren in Force Awakens, by this time Rey had received Jedi training from both Luke and Leia. Her nifty move turned the tide, and kept up a long tradition of Jedi using whatever weapon they could get their hands on.

Later, Rey meets the Force ghost of Luke Skywalker who gifts her Leia’s lightsaber. Rey takes this green-bladed weapon along with Anakin’s lightsaber to her final battle with her grandfather, Darth Sidious.

Kylo Ren’s Dark Side weapon was thrown into the sea on Kef Bir, but the other two survived the fight and were still in Rey’s possession when she arrived on Tatooine. Adding her own golden weapon to the mix, she now had three lightsabers – enough to make even General Grievous envious.

Why did Rey build her own lightsaber?

So why build a new weapon anyway? It’s not like Anakin, Luke or Leia were needing theirs. It could be that Rey felt called to do so. From what we know of Jedi training, a major part of that training is collecting your own kyber crystal and constructing your own lightsaber. Being the last Jedi alive, Rey could have used her scavenger skills to deconstruct the two weapons she had and reverse-engineer them. The hilt of her lightsaber is part of her old quarterstaff, which is really cool, and the extra features suggest an unorthodox approach to lightsaber construction.

How many lightsaber colors are there?

Rey’s lightsaber is the first yellow one we’ve seen in live action, but it’s not the first one that’s appeared in canon. Nevertheless, it’s unusual. 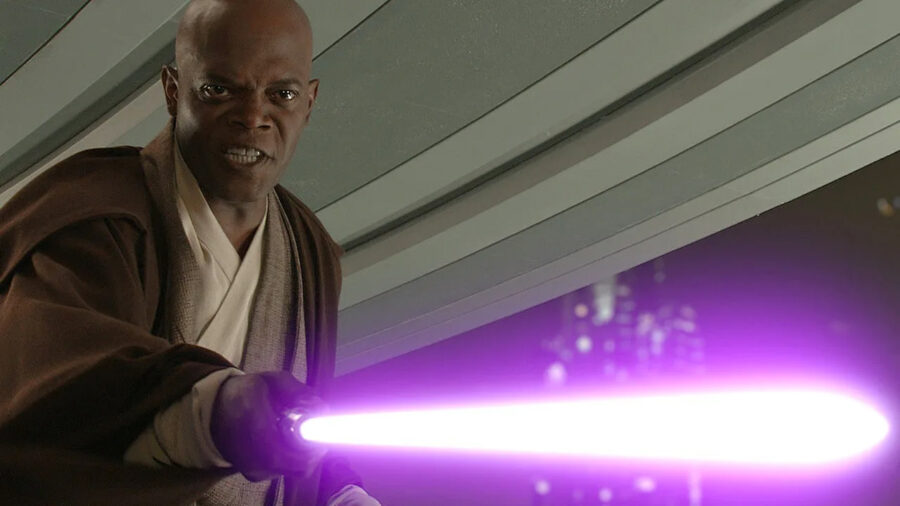 Throughout the movies, Clone Wars and Rebels, Jedi weapons are almost always blue or green, with Mace Windu’s blade a kick-ass purple. No account of the colors has even been offered, but they may be connected to an aspect of the Jedi called to wield that particular weapon.

It’s been suggested that Mace Windu walked perilously close to the Dark Side with his cold, aggressive style of fighting, and that the purple color of his blade was actually a touch of Sith red corrupting his Jedi blue.

Every Sith Lord and every Sith inquisitor we see in the movies and TV shows has wielded a red lightsaber. An explanation for this was offered in the canon novel Ahsoka, published in 2016, describing how the Sith dominate and control the kyber crystal powering the lightsaber, torturing the crystal and turning the blade red.

This explains Ahsoka’s famous white lightsabers which she wielded in Star Wars: Rebels – in the book she destroyed an inquisitor double-bladed weapon and rescued the crystals, purifying them in two new sabers. While no longer a Jedi, Ahsoka adhered to the spirit of the Order and might be a model for Rey to follow.

Another rogue Force-user, Asajj Ventress, wielded a yellow lightsaber after her red blades were stolen. We don’t know where she acquired it. Did Maz Kanata sell it to her? That might account for why Maz also had Anakin’s lightsaber – she made a habit of acquiring lost weapons. But it suggests that Rey isn’t the first warrior to carry a golden saber. Was the lightsaber Ventress carried an image left over from a golden age, an old relic last seen in the High Republic?

Is the Rey lightsaber related to the Temple Guard lightsaber?

Or the yellow could come from something different. In the Jedi Temple we often saw guards on duty and each one of them had a yellow, double-bladed staff. It’s interesting that all the Jedi Guards had yellow blades and none of the Jedi themselves did, so perhaps the color yellow is related to guardianship? If the Force gave Rey a yellow lightsaber to wield, perhaps it’s because she’s been entrusted with the Jedi legacy in a way that Luke Skywalker never was. This would be a new and fascinating path for Rey to follow.

Moving on from Star Wars: The Rise of Skywalker

Star Wars: The Rise of Skywalker leaves many questions unanswered. It closes out the Skywalker saga in a less-than-clear way, and as viewers we’re honestly not sure if this story line will continue. It would be on-brand for Lucasfilm to continue Rey’s story, saying “follow us” as they press Star Wars further into related Skywalker lore. If so, all I can say is, “please, let our young scavenger do something new; don’t go back and retcon stuff.” We don’t need to see Luke Skywalker or Kylo Ren again – as Kylo himself said, “Let the past die.” 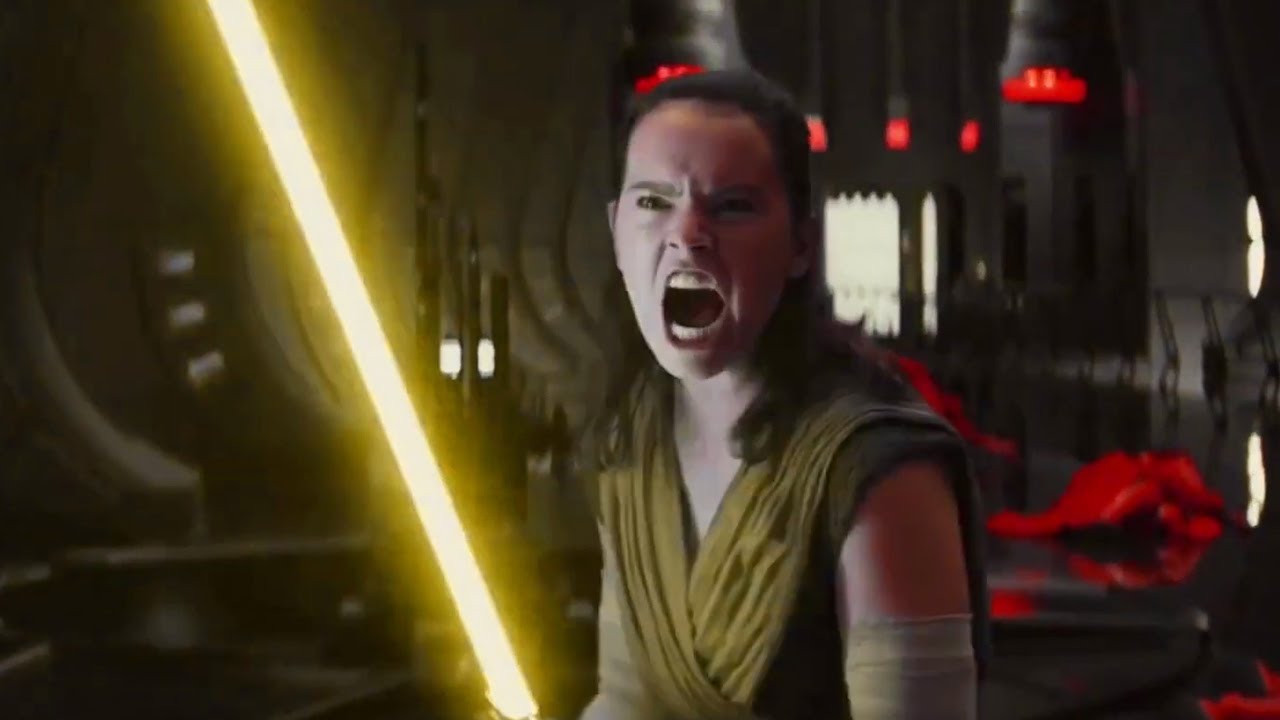 I’d like to see Rey and her nifty new lightsaber do something different. Maybe Rey Skywalker senses a sign in the Force to quest for a long-lost item at some ancient, pre-Jedi site no-one has seen for a thousand generations. Or she receives a warning of a new, mysterious threat recently emerged from Wild Space. Whatever’s published – book, TV or film – this is a chance for Rey and her lightsaber, no matter what its color, to start building a new saga.