The Sith Trooper and the Failure of Rise of Skywalker

Having an army of faceless, anonymous soldiers is an essential part of any Star Wars evil organization. It’s the image of villainy, and after 12 movies (yes, Clone Wars counts) fans have come to expect it. Star Wars: The Rise of Skywalker does not disappoint, introducing us to the sith trooper.

What else can we fit into Star Wars? Sith troopers… Why not?

So, to recap: we started with stormtroopers (A New Hope), then snow troopers (The Empire Strikes Back), then scout troopers (Return of the Jedi), then clone troopers (Attack of the Clones), then First Order stormtroopers (The Force Awakens), then death troopers (Rogue One) plus a host of troopers who fly, who swim, who drive, and more. And don’t forget the Chancellor’s Senatorial Guard (Phantom Menace), the Emperor’s Royal Guard (Return of the Jedi) and Snoke’s Praetorian Guard (The Last Jedi).

The list of sinister, masked goons is getting long, but can we squeeze in one more?

More importantly, do we need to? 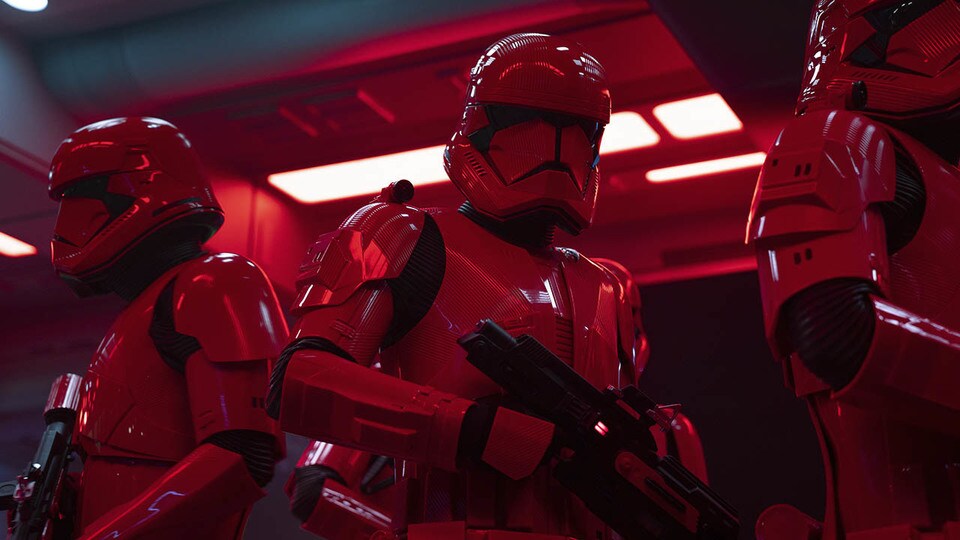 What movie is the Sith trooper in?

The Rise of Skywalker had a lot of pressure on it. Not only did it have to wrap up a nine-episode movie series, it had to do so coming on the heels of the less-than-consistent storytelling of Force Awakens and Last Jedi. Plus, after more than 40 years of fan fiction and speculation, the public had high expectations. So I sympathize.

Even so, I’m not sure why we have Sith troopers. Yes, I understand that Disney is a business and it’s always smart to add new products to the store for fans to collect, but you shouldn’t just create a new figure and hope that the fans will like it enough to buy extra merch.

(Sorry, who am I kidding? Star Wars creators have always reserved the right to create merch that otherwise would have had no place in the galactic story. *Cough*porgs.)

Can Sith troopers use the Force?

Anyway. Sith troopers. Let’s a look at them. They’re the elite rank and file created to support the return of Dark Side forces, foot soldiers in an army united under the Sith and intent on ruling the galaxy. We don’t learn much about the Sith troopers in the film and based on the cloning technology Kylo Ren discovers, it would be reasonable to think they’re clones. But apparently they’re natural-born humans, raised from birth to be completely loyal to the Sith.

They don’t use the Force, though. No doubt Palpatine could have searched the galaxy for Force-sensitive children, but even at the height of his galactic power he struggled to find such children – trying to gather a Dark Side army while hiding in the Unknown Regions might have been just too much. Besides, no Darth likes to share power, and a world of Sith acolytes would have led to chaos.

One thing I will give the Sith troopers: they look cool. Their red armor is high quality and the matching blaster is a nice touch. The detailed texture covering their armor is fancier than the standard Imperial or First Order garb, and Sith troopers certainly win the category of aesthetics.

They’re almost as slick as the black-armored death troopers from Rogue One and Rebels, but do they measure up in battle? The death troopers were the elite soldiers of their day, and we saw them in battle on Scarif where they play an important role in pushing back the insurgents. They lived up to their name, matching form to function as they left a trail of dead rebels in their wake (including a few stars of the movie).

Sith troopers should have reserved some extra range time

This is a shame. After the disappointment of the First Order, this new Sith army had the chance to be what every Star Wars fan was hoping for: a genuinely menacing villain.

Typical for The Rise of Skywalker

People are free to speculate on what went wrong with Rise of Skywalker, and many an article has tried to account for the various missteps. As I search for answers myself, I think the Sith troopers can help to address the problem. They were created as a mix of old and new, sharing features with standard First Order stormtroopers but presented in the promo pages of pre-release marketing as something dark and menacing. Unfortunately, making a trooper red doesn’t make him elite and first impressions can turn sour quickly if these new soldiers aren’t actually effective.

The Sith trooper is the symbol of what went wrong

Star Wars fandom is smarter than we’re sometimes given credit for, and as site after site reveals, we weren’t fooled by Sith troopers and the related Sith Eternal featured in Rise of Skywalker. The whole concept might have seemed cool during the first planning sessions for the movie, but the execution of the idea was severely lacking.

Much the same can be said for the entire movie. It had some great ideas, but in the final account it fell short on delivering most of them. Don’t get me wrong: I want to like this movie, but to date I’m still reserved in offering even a cautious thumbs up. If it wasn’t a Star Wars movie I might be able to say, meh, it was a decent romp through a galactic playground. But unfortunately it is a Star Wars movie – and the final chapter at that – and I’m not sure the creators took into account just how much the fandom was expecting.

Please, go back to the basics of storytelling

Making stormtroopers red doesn’t make a good movie. Bringing back an old villain doesn’t tie everything together. If Disney had planned it out in advance, they could totally have linked the First Order, the Sith and the related return of the dark lord Palpatine, setting us up for a titanic clash between good and evil that would have made Return of the Jedi mere prolog.

But they didn’t. They cobbled together a few poorly conceived ideas, with zero set-up in the previous movies, that undid the triumphs of the previous films and kicked over the apple cart of continuity. Sith troopers, no matter how cool they look, can’t fix that.