An Entire Galaxy at War: The Six Most Epic Star Wars Battles

Star Wars is all about battles. Oh, a fan can explore the hero’s journey of Luke Skywalker, the redemption of Darth Vader, the tortured path of Kylo Ren – that’s all good. But what does a fan really want in a Star Wars movie? What does the media go crazy for? Star Wars battles!

What was the biggest battle in the Star Wars Universe?

For sheer size, credit here goes to the Battle of Coruscant, which opens Revenge of the Sith. A Separatist fleet has struck the Republic homeworld and Chancellor Palpatine has been captured. The Republic fleet responds in full force, and a titanic clash unfolds over the planet. This is the final battle of the Clone Wars between the Republic and the Separatists, and one of the biggest, most overwhelming battles in all of film.

But it’s not the best battle in Star Wars.

What is the best Star Wars battle?

There’s a wide variety of Star Wars battles, from light saber duels to army engagements to underwater contests to atmospheric dogfights to iconic space battles. For this survey I’m going to restrict myself to major clashes, so apologies to all those fans hoping to discuss Yoda decapitating clones on Kashyyyk, or the stunning Jedi-Sith duel in Phantom Menace.

Let’s take a look at six of the most epic battles in the Star Wars universe.

6) The Battle of Endor

The climax of Return of the Jedi, and of the entire Original Trilogy, the battle between the Empire and the Rebel Alliance over the fate of the second Death Star had a lot to live up to. And it delivered on all fronts. It started with high tension as our heroes were captured on the ground and things looked grim.

That was countered with the arrival in orbit of the largest rebel fleet ever seen by fans, although that too was revealed to be a trap. And all the while, Luke was facing off against Emperor Palpatine to decide the fate of the Jedi.

All seemed lost, but then the fate of Galactic Empire was sealed by a group of tiny, furry rebels. I know, the Ewoks haven’t aged well and they’re not the best-liked part of the Star Wars franchise, but they were a great plot twist and they let the Battle of Endor get underway.

And what a battle. Pushing the limits of special effects for the day, the space battle was mind-blowing – I mean, how many TIE fighters can you fit on a screen? – and the ground battle great fun. The quick cutting back and forth only added to the excitement of this last battle in the Galactic Civil War.

5) The Battle of Quell 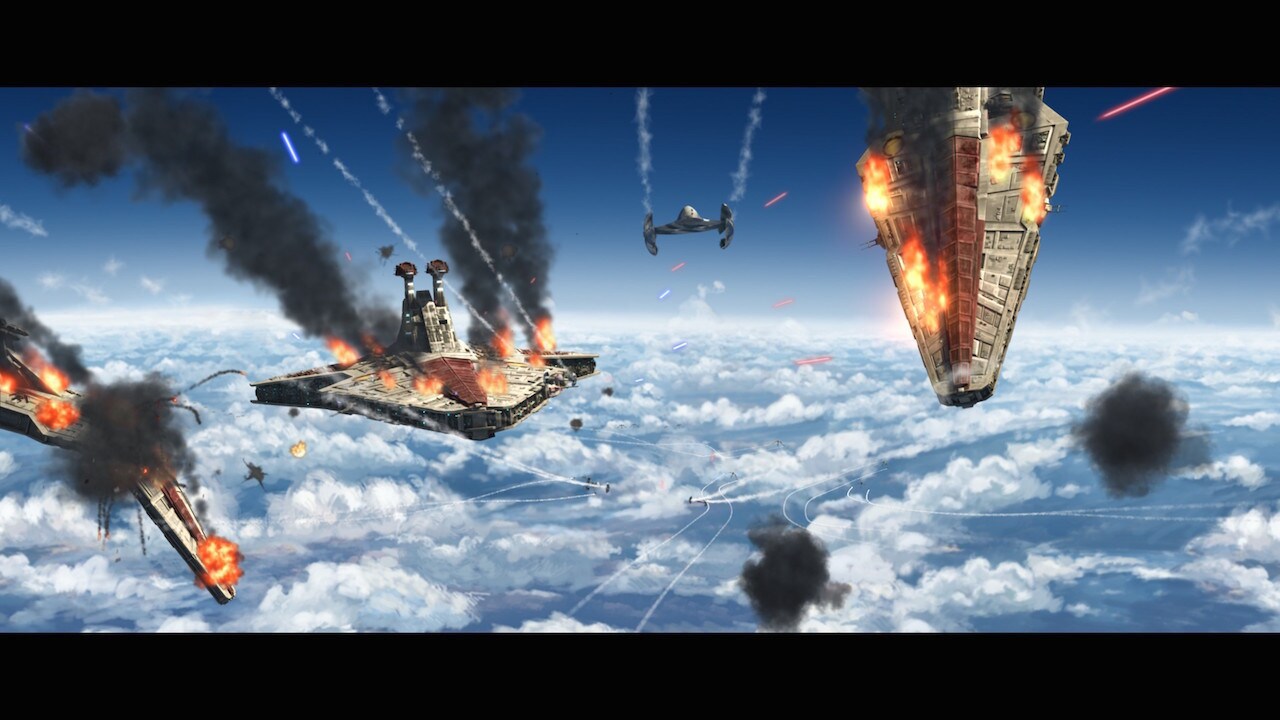 This is probably one you haven’t heard of. It’s the opening sequence to episode 13 of Clone Wars Season 1, best known as Jedi Aayla Secura’s only major speaking part in all of Star Wars. Most of the storyline takes place on Maridun, where Aayla, Ahsoka and some clones have to protect a badly wounded Anakin Skywalker. But how did he get so badly wounded? The Battle of Quell.

Aayla’s cruiser is under attack from multiple Separatist ships, with super droids boarding even as her ship is burning up in the atmosphere. Anakin’s cruiser arrives to join the desperate fight, with gunships diving, droids everywhere and (unusual for Clone Wars) an actual sense of danger – a sense that our characters might not be okay.

It’s one of the most exciting opening sequences in all of Star Wars, and it’s worth another look.

4) The Second Battle of Geonosis

To be clear, I’m not talking about Attack of the Clones – that battle was visually spectacular, but it had no emotional oomph. No, I’m talking about an episode from Clone Wars, where Anakin, Obi Wan and the gang have to capture this strategic planet in the Second Battle of Geonosis – in particular, the Landing at Point Rain.

Republic forces attempt to land their gunships under heavy fire and things go badly. Obi Wan is shot down and forced to take a desperate stand against advancing droids. The other Jedi scramble to relieve him under constant assault, while still pressing forward to their objective. Obi Wan and Anakin have a game where they compare number of droids killed, only to discover at the end that Jedi Ki Adi Mundi has bested them both.

This battle has a frantic, D-Day Normandy Landings sort of feel, and the eventually victory is felt much more deeply by viewers as emotionally exhausted as the characters.

3) The Battle of Hoth

This is one of the most iconic of all Star Wars battles. The climax of the first act in The Empire Strikes Back, the Battle of Hoth is notable for being one of the only battles in the Star Wars franchise where the good guys unequivocally lose.

The Rebel Alliance is on the run, hiding from an Empire out to destroy them. You see the fear in their eyes when they realize the attack is coming, but you also sense the camaraderie and spirit of resistance as Luke Skywalker leads the Rebels in a (literal) last-ditch battle against Imperial walkers. The troops put up a brave fight but are forced to retreat under the relentless advance of the Empire.

From a dramatic point of view, everything about this battle is brilliant. Tactically, I have to question Luke’s decision to send his speeders directly into the AT-AT line of fire, but the ingenious use of tow cables and that awesome ion cannon (the first transport is away – YAY!) make for gripping moments.

2) The Battle of Yavin

This battle is the capstone of A New Hope, which is one of the biggest cultural events of the 20th Century. As the final battle of the original Star Wars movie this battle had to deliver, and it did so in spades. The Battle of Yavin is classic storytelling merged with cutting edge special effects and, nearly 45 years later, is still great fun to watch.

A really interesting aspect of this sequence is the fact that it’s carried not by our heroes, but by a bunch of rebel pilots who we’ve never met until now. Dramatically, nobody introduces a bunch of minor players in the final fight and then kills them all off. It shouldn’t work – and yet it does. And the personalization of those pilots – of Wedge, Biggs, Red Leader, Gold Leader, Porkins and the rest – brings extra emotional intensity to the scene. And then afterward, Luke and Han each get to collect a medal and the audience cheers, knowing that the galaxy is safe.

George Lucas is a master storyteller, and there’s much to explore in his works, but the emotional poignancy of the Battle of Yavin is one of his triumphs.

1) The Battle of Scarif

The Battle of Scarif is what war movies should be. A film fan doesn’t need actual army experience to appreciate the thrill of dodging death, or of risking all to protect your friends. This battle also showcases that moment when the Rebels transformed from talkers into fighters, and the Galactic Civil War began. It also carries a hard edge because so many folks we care about don’t make it.

Plus, we love the homage to all of Star Wars everywhere in this battle. Red Leader and Gold Leader in their prime, the Ghost wreaking havoc in the background, the Death Star menacing and, of course, Darth Vader, Dark Lord of the Sith, showing us what a Dark Side force-wielder can really do. 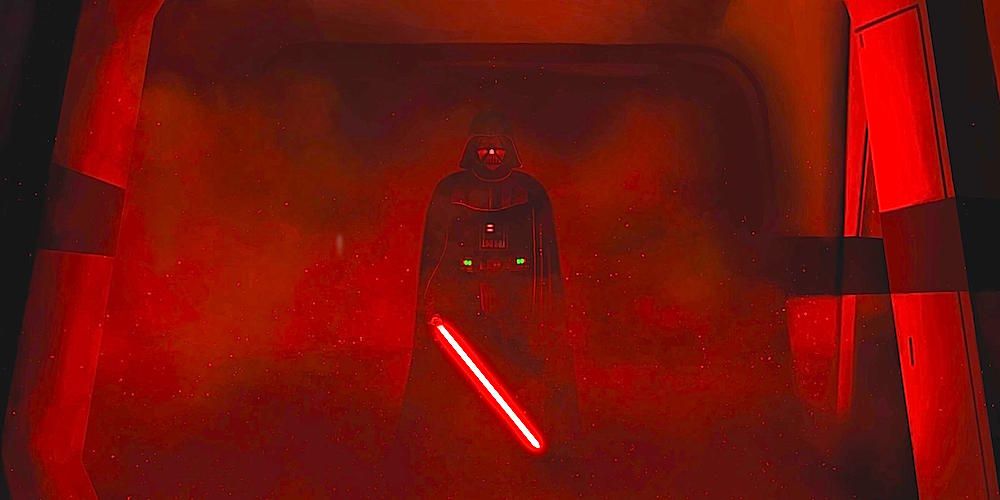 But wait! What about Rebels, and the Resistance, and the First Order?

There are so many battles in Star Wars, I couldn’t possibly discuss them all. To be sure, Kylo Ren and the First Order are a force to be reckoned with, and Poe Dameron flies a mean X-Wing. But while each episode of the Disney trilogy has something to offer, I don’t think their battles quite measure up.

I’m a huge fan of Star Wars: Rebels, too, but that show shone most brightly through its character arcs. It had some good scraps, but few of them really merit the title “battle”. Rebels was the guerilla war before the big war broke out at Scarif, and even though planet after planet got slowly drawn in, Rebels kept the fighting to a small scale.

There are other fan favorite battles like Starkiller Base in Force Awakens, or the salt planet Crait, or Naboo, or even something from Attack of the Clones. Or maybe you wish Starkiller Base blew up Naboo, just to shut up Jar-Jar for good. They’re all good fun – they just don’t make the Top Six.

Each film and TV episode offers its own tapestry to explore. And whether you’re a fan of the Jedi, the Resistance, the First Order or the Clone War, Star Wars has an epic battle just for you.