The Star Wars Blaster: Why be Civilized?

Jedi Master Obi-Wan Kenobi once famously tossed aside a blaster with the disdainful comment, “So uncivilized.” Now, I’m never one to disagree with a Jedi Master (unless it’s Ki Adi Mundi – that guy sucks) but I sometimes feel that perhaps Obi-Wan didn’t fully appreciate the usefulness of these weapons.

Personally, I think blasters are awesome. We called them “laser pistols” when I was a kid, but in fact these weapons don’t fire lasers at all but high-energy particles packed tightly together into a pulse (or “blast”). The light radiation leaking from these pulses is similar to lasers, but the physics behind them is completely different.

(Yes, physics. Star Wars physics. Don’t go all PhD on me here – I’m fully embracing the science of Star Wars and all its related technology.)

The accuracy of a typical Star Wars weapon

But before we get into specifics, let’s address the bantha in the room: why do so many blaster shots miss? Especially when fired by certain Imperial troops in white armor? Well, it turns out that hitting something with a ranged projectile weapon is actually a lot harder than it looks. Here on Earth, data from NYPD and LAPD real-world gun engagements indicate a pretty clear trend of officers hitting their targets well below 50% of the time. And these guys train something fierce.

I can’t see a thing in this helmet

A stormtrooper is inevitably charging forward in battle (cuz that’s what they do), dodging fire and trying to see through those tiny eye-holes in their helmet. Since their foes are usually hiding amongst detention pillars, swinging over chasms or leaping behind blast doors, the odds of missing the target get pretty astronomical.

Let’s examine the standard categories of blasters and their basic functions.

Much of the galaxy is a rough-and-tumble, Wild West sort of place, where law enforcement functions poorly if at all, and with blasters so readily available many folks feel safer packing one. Luke was a moisture farmer and even he owned a light-weight rifle!

Jedi opinions aside, a good blaster pistol is ideal for personal defense. Small enough to hold in one hand, the blaster pistol is also easier to hide, or at least to holster and not look overly aggressive. A blaster pistol can deliver serious damage at range, providing basic protection to anyone with a manipulating limb and the ability to sense its surroundings. 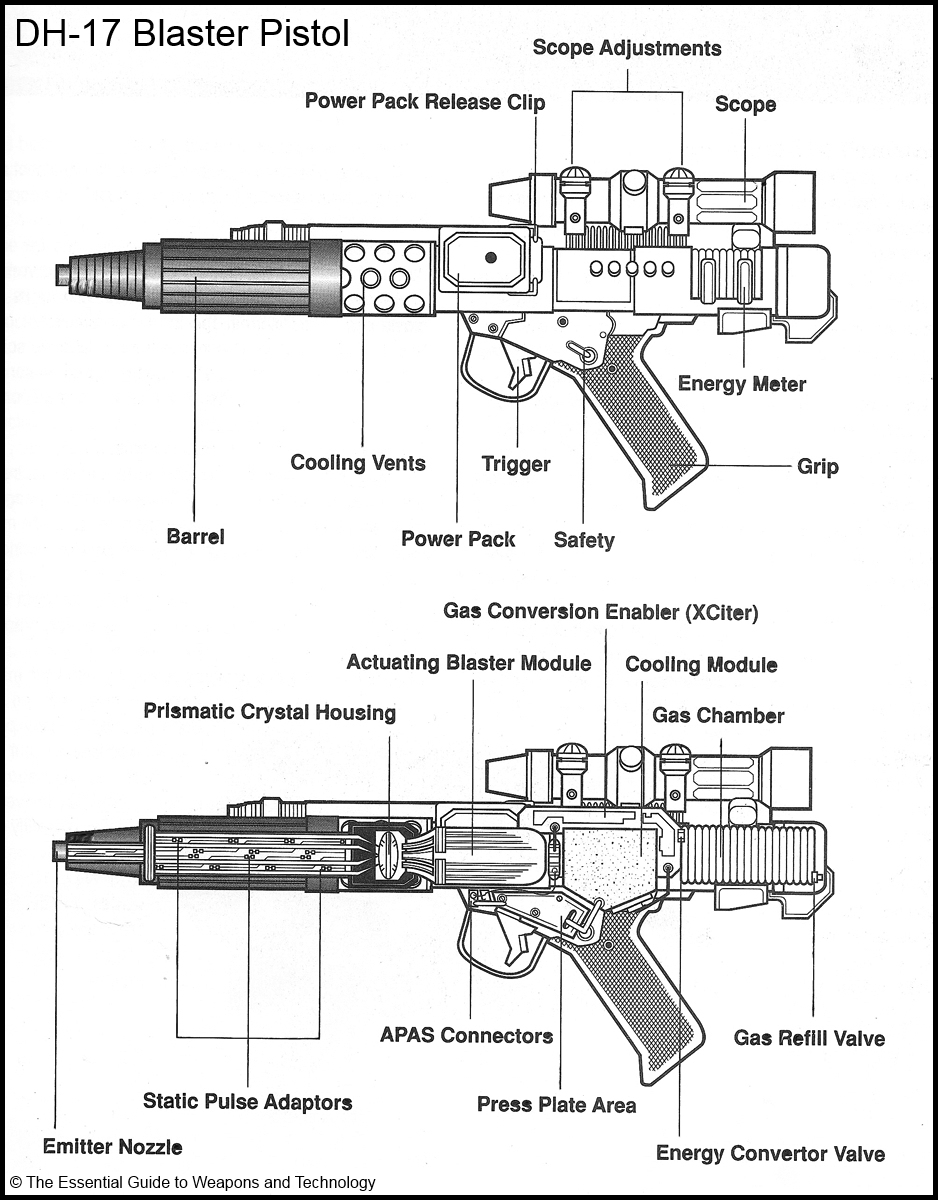 Most blaster pistol owners are content to use their weapon based on factory standards, but more serious fighters may add or apply one or two modifications to help their blaster pistol perform better. Choices like scopes, larger power packs or even twin barrels can leave a blaster pistol looking awkward and unbalanced, but a skilled operator who knows their weapon can make short work of surprised foes.

No matter how much you strap onto a blaster pistol, though, it can only get so powerful and so accurate. For the serious fighter, the only option is to upgrade to the blaster rifle. The increased size of this weapon allows it to store more energy and direct the blast longer, resulting in a more powerful, more accurate shot with a longer range.

There are many others like it, but this one is mine

The blaster rifle delivers greater energy, range and damage than a pistol, but its size alone is sometimes enough to take control of a social situation. The sheer visual of a stormtrooper with a blaster rifle is often sufficient to ensure the local populace follow the rules. Clever media propaganda is used to back up this image and provide the right information for the people to set their priorities in line with Imperial directives.

A citizen who can learn how dangerous a stormtrooper and his blaster rifle are simply by reputation is a citizen who can avoid getting hurt. And if they value their privacy, they’re free to move to another galaxy.

But blaster rifles have more functions than just intimidation. They can deal out the damage for sure, but sometimes the Empire wants to gain information from its foes. In these cases, a stormtrooper can use the stun setting. This is a low-power energy blast than can still deliver a a shock, but the target will simply fall unconscious. When they come back they’ll find themselves safely transported to an Imperial holding site where, given a little time and patience (or torture, whatever) the Imperials can learn whatever information they may need.

Rebel soldiers sometimes get on the same page. They’ve been known to use stun blasters to capture and deliver a valuable target or two for interrogation. The difference is, they say “please” when they demand answers.

Blasters are often thought of as personal weapons, but this technology has been scaled up for vehicles as well. Used extensively in the Clone Wars, blaster cannons are related to their smaller cousins but channel enormous energy to deliver enormous damage.

Modern star destroyers now employ turbo lasers but many older ships still use blaster cannons. Turbo lasers have superior range and accuracy, but their size means they can be based only on the largest of vessels. Fighters on both sides of the conflict use blaster cannons to devastating effect.

Is that armor too strong for blasters?

Not all blaster cannons are equal, though. At the Battle of Hoth, the Rebel snow speeders had light weapons incapable of punching through the AT-AT armor. When compared to the X-Wings at Scarif who chewed through the AT-ACT’s, the difference between the two related gun systems becomes clear.