Deep Inside Star Wars Concept Art: Evolving Ideas and What Might Have Been

When George Lucas first decided to pitch his bizarre “space fantasy” movie to studio executives, he knew that his own words wouldn’t be enough to convince a skeptical audience. Lucas himself recalls one meeting where he struggled to explain “what a Wookie looks like” to a bunch of suits. He decided to hire a concept artist to help bring his vision to life, and Ralph McQuarrie’s astonishing images helped secure George Lucas the support for his film, and changed science fiction forever.

But those early paintings and sketches are startling in how different they are from the final films, and it’s fun to dig deep into the image archives and discover how much of the entire Star Wars saga was born in pieces of concept art conceived for the original Star Wars trilogy.

Any creative project will evolve during early development, and Star Wars is no exception. But we’re fortunate to have so much of the original concept art still available. Fans can marvel at just how much our characters have changed, but also at how accurately the plucky special effects folks at Lucasfilm Ltd. were able to recreate McQuarrie’s vision on the big screen.

It might seem strange, but one of the characters who underwent the most changes was the hero of the Star Wars saga himself, Luke Skywalker. In early versions his name was actually Deak Starkiller, and as we can see in this famous early painting he was quite different from what Luke eventually became.

Note that both hero and villain are wearing breathing masks. This was a Ralph McQuarrie idea, thinking that it would be easier for the characters to jump from spaceship to spaceship as part of their epic duels. Darth Vader is pretty close to his final concept in this image, but I think it’s cool that his breathing device – now such an iconic part of his identity – was originally conceived as a practical tool to help him do his job. Imagine how different Star Wars would be if Darth Vader could have taken his mask off as easily as Kylo Ren.

Luke Skywalker was a girl?

Another remarkable creative change was making Luke a man. Early sketches show that, at some point in the process, George Lucas envisioned his central hero as a woman.

This would have made that infamous scene in the medical bay on Hoth, where Han Solo had to watch Leia plant a kiss on the hero of Star Wars, quite different.

The first heroes of Star Wars

Ralph McQuarrie created this early marketing visual for A New Hope (way back when the movie was just called Star Wars) featuring the central characters. R2-D2 is pretty recognizable and C-3PO has taken form to a degree. Han seems to be a mix of Lando and Obi-Wan with that cape, beard and lightsaber while Chewbacca has yet to evolve into the lovable figure he would become. Luke is still a woman, and there’s no Leia in sight.

The legacy of Ralph McQuarrie

When it comes to Star Wars concept art, Ralph McQuarrie is the undisputed master. I think it’s fair to say that the entire 40+ years of the saga carries his artistic tone, whether he was directly involved or not. McQuarrie’s style drove the film production visual style and established the vision of Star Wars.

The look and feel of the entire Original Trilogy is rooted firmly in the concept art of Ralph McQuarrie, but even in later movies his influence remained. Not only had he established a clear motif for that galaxy far, far away, later concept artists often looked back to the Ralph McQuarrie library for inspiration.

McQuarrie himself wasn’t above revisiting old artwork when a new ship, character or even world was needed. One version of Alderaan created for A New Hope visualized it as a gas planet where an advanced society lived in floating cities. This idea was rejected, but then reborn as Cloud City in The Empire Strikes Back.

Concept art that should have been

As Star Wars became A New Hope, added The Empire Strikes Back and just kept gaining speed, many other concepts were developed to support the radical creativity in the Original Trilogy and beyond. Ralph McQuarrie was joined by other talented artists who continued his vision and expanded it.

As we look back, sometimes we can only admire a painting and wish that the idea behind it had made the cut.

Asajj Ventress and Attack of the Clones

In the Prequel Trilogy George Lucas wanted to explore the last days of the Republic, the Jedi Order and the rise of the Sith. Darth Maul thrilled fans in Phantom Menace but Lucas decided to go in a different direction for the next movie, making the new Sith apprentice a fallen Jedi, the noble and gentlemanly Count Dooku.

But another idea for Maul’s replacement was Asajj Ventress. Later made famous – and a fan favorite – by her extended role in Star Wars: The Clone Wars, Ventress became one of the most complex and best-developed villains in all of Star Wars. I can’t help but wonder how different – and better – Attack of the Clones would have been if Ventress had been the main adversary. 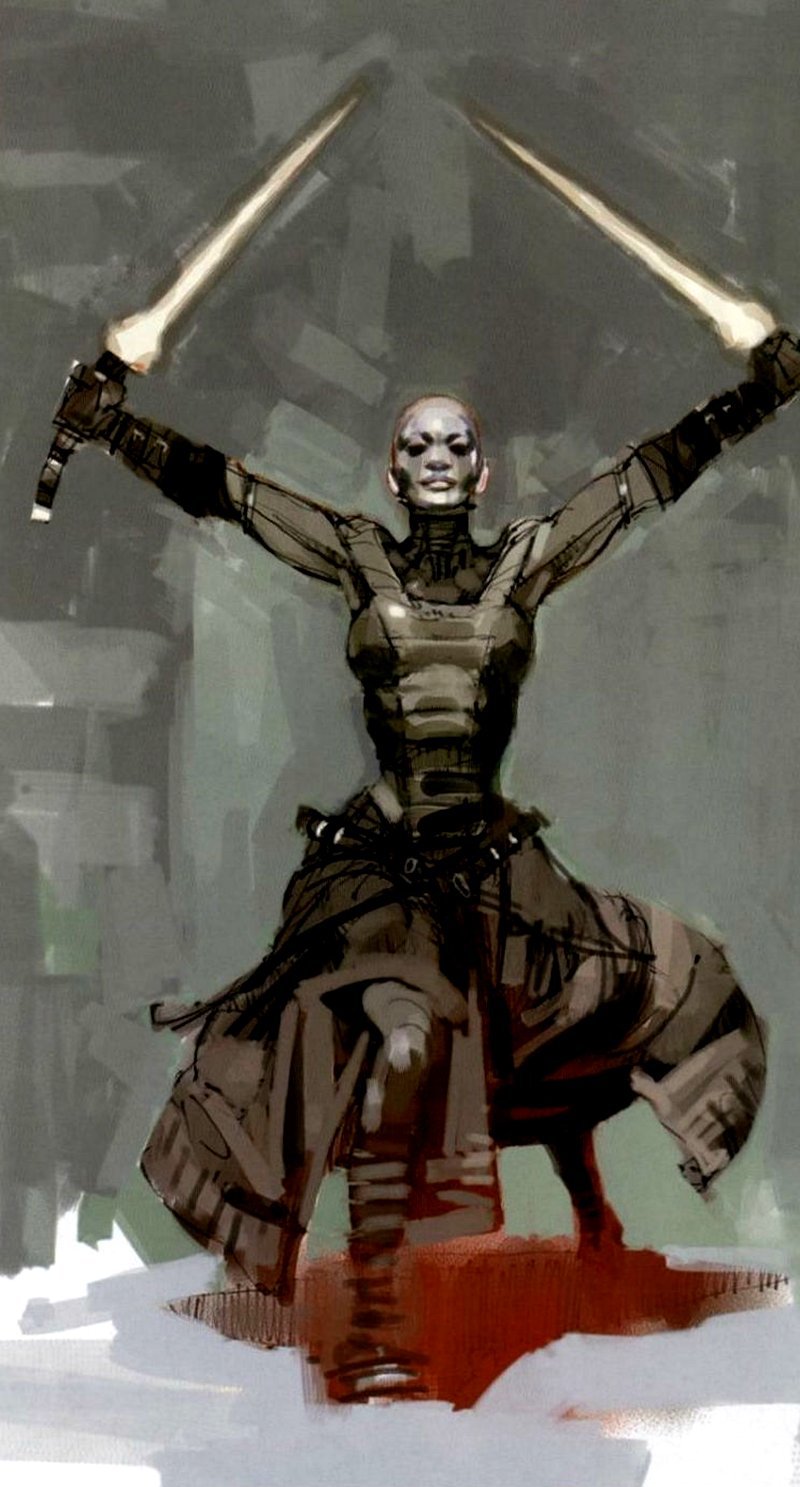 Clone Wars wasn’t the only Star Wars television show to go panning for gold among Ralph McQuarrie’s old ideas. Rebels is a McQuarrie fan’s treasure trove of lost art brought to the screen. The very first painting of Star Wars featured C-3PO and R2-D2 just after they crash landed on Tatooine, and that ancient version of 3PO has often been likened to Maschinenmensch from the classic film Metropolis. It’s such an iconic image of the protocol droid that fans cheered when the design appeared in Rebels as an Imperial assassin droid disguised as a protocol droid.

Why waste a good goon?

But while that assassin droid appeared in just a single episode, another one of Ralph McQuarrie’s designs saw a much bigger revival. Chewbacca underwent several designs before his character appeared in the film, and one of the more resilient Chewbacca concepts inspired the creation of Zeb Orellios, one of the central characters in the Rebels crew. 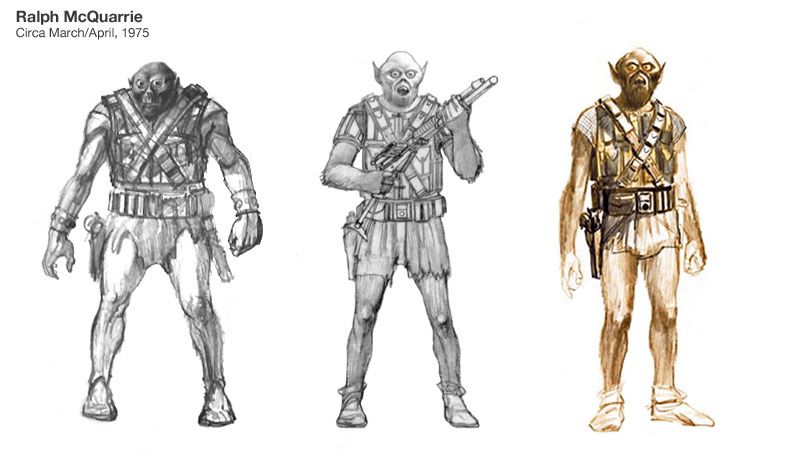 Spiders… Why did it have to be… spiders?

Another piece of concept art was first offered as a monster on Dagobah but was never used (for which I’m eternally grateful, because I like The Empire Strikes Back…). Rebels artists decided, however, that this Ralph McQuarrie nightmare was perfect for their eerie native creatures on Atollon. At first just a menace for our heroes to fight, these white spiders play a major role in the development of Jedi Kanan Jarrus.

For those not familiar with the Star Wars animated series, these same spiders make a terrifying appearance in The Mandalorian. Because I guess creepy, giant white spiders just need more screen time in Dave Filoni’s version of Star Wars. 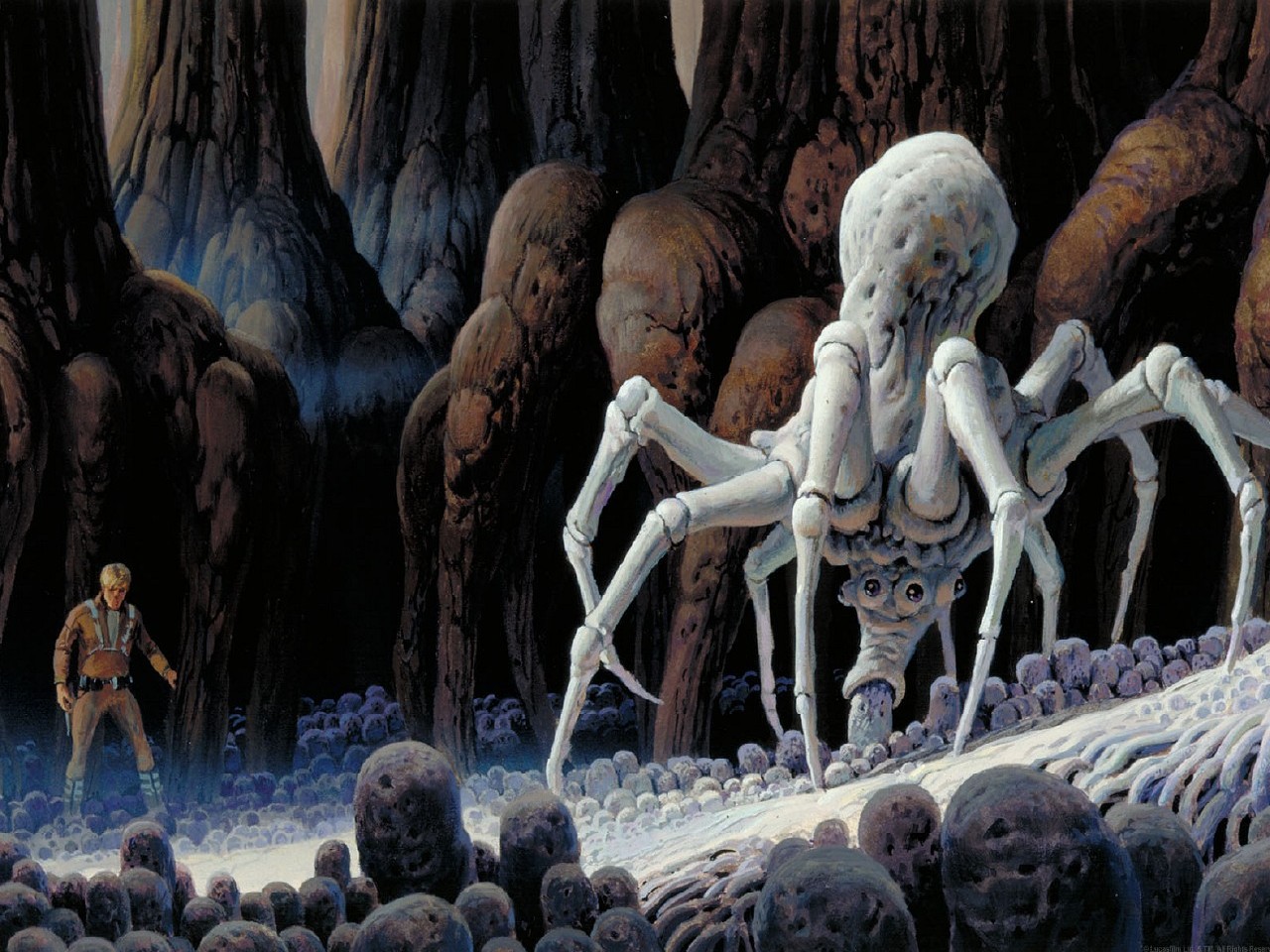 Of course, not everything Ralph McQuarrie and the other Star Wars artists was good. Some of it could have been interesting but just didn’t fit the final vision of the films. Questions like “who gets to carry a lightsaber?” clearly hadn’t been discussed at length when we see pictures of Han Solo and even a stormtrooper wielding the laser swords. This could certainly have taken the concept of the Jedi down a very different path – fascinating to think how such a small detail could have changed the movies so much. The related idea that a lightsaber has a distinct color also hadn’t been finalized, as many images show white blades. Darth Vader is definitely scarier with his red blade.

Other Ralph McQuarrie ideas best forgotten are his original concept of Yoda as a garden gnome, or giant trolls attacking the Ewok village. And no criticism of McQuarrie here – any designer has to let their imagination run far and wide, and the sheer scope of the Original Trilogy demanded a multitude of ideas.

One McQuarrie idea that I’m very glad was shelved is this scene where Luke Skywalker is brought before Emperor Palpatine in some kind of cave. While this might have been creepy and suitable for the Sith (and possibly re-imagined in The Rise of Skywalker…?), a huge part of Luke’s inner conflict was watching his friends fight a losing battle around him. His front-row seat in the viewing tower of the Death Star tied his story to those of Han Solo and Lando Calrissian and made for a much tighter movie.

Thinking about it, if this McQuarrie image was used as inspiration for the final Star Wars movie, it would explain why Palpatine had to suddenly (and impossibly) open the roof so Rey could see the ship battle. Up until then, her conflict was completely isolated from the rest of the world. It’s as if the Rise of Skywalker team chose a McQuarrie image because it was cool, but failed to recognize its conceptual flaw like the Return of the Jedi team did. Somehow, this wouldn’t surprise me.

Concept art as timeless as Star Wars itself

Star Wars was reborn for a new generation when The Force Awakens hit theatres, but no-one doubts that the Disney films still take their cue from Ralph McQuarrie and his original concept art. Everything we see in the galaxy is clearly related thematically from the Death Star to the smallest kyber crystal.

If you’re interested in visiting the world of Ralph McQuarrie concept art, there’s a great book available. But the vision of Star Wars is now the result of many talented artists and I look forward to seeing many more vistas in the years to come.