How to Decipher the Star Wars Family Tree

Star Wars is one of the biggest franchises in entertainment and one of the strongest links throughout the entire saga has been the Skywalker family tree. The seeds of that tree were planted way back in 1977 and they’ve since grown, sprouted and gone in some very unexpected directions, culminating in 2020’s aptly named The Rise of Skywalker.

But because the story was revealed out of sequence, it can be hard to keep it all straight, and if you’re just a casual fan of the series, some parts of The Last Jedi and The Rise of Skywalker were probably pretty confusing. Let’s take a look at the Star Wars family tree.

Shmi Skywalker – the matriarch of this family was Shmi, a slave woman on Tatooine of gentle spirit and kind heart. We first met her in Phantom Menace as a slave for junk dealer Watto and then learned in Attack of the Clones that she was sold to farmer Cliegg Lars, who freed her and married her. She died tragically after being captured by tusken raiders.

Anakin Skywalker – Anakin was Shmi’s only son. He was raised as a slave until fate (or the Force) brought Jedi Master Qui-Gon Jinn to Tatooine. Qui-Gon realized Anakin’s Force potential and saw the boy freed so that he could be taken to the Temple. After Qui-Gon’s death Anakin was trained by young Jedi Obi-Wan Kenobi.

On this same visit, Anakin met Padme Amidala whom he married years later in secret. Unlike most Jedi, however, Anakin wasn’t able to control his emotions and recurring nightmares of Padme dying in childbirth drove him to the Dark Side of the Force. He took the name Darth Vader and was unaware that he had any children.

Padmé Amidala – Padmé was the elected queen of Naboo when she met Anakin, and a senator when they married. A strong, independent woman she struggled with keeping the marriage a secret but knew that both of their roles were too important for galactic history and she sacrificed a happy family life for the good of the Republic. Padmé gave birth to twins Luke and Leia before dying of a broken heart at Anakin’s turn to the Dark Side.

Luke Skywalker – The son of Anakin and Padme, and twin brother to Leia, Luke was spirited away at birth by Obi-Wan and raised in secret by his foster parents Owen Lars, the step-son of his grandmother Shmi, and his wife Beru, who took on the roles of Luke’s uncle and aunt. In his late teens, during the film A New Hope, he was thrown into the center of the Galactic Civil War and trained to be a Jedi before confronting Darth Vader and learning the shocking truth that Vader was his father. In their second battle Luke proved his might as a master of the Light Side, helping his father to turn against his master Emperor Palpatine at the climax of Return of the Jedi. Anakin Skywalker / Darth Vader died a redeemed man because of his son.

Luke went on to found a new Jedi Academy but when it all fell apart he became a recluse. Only the determination of the scavenger Rey brought Luke back into the conflict and he sacrificed his life to confront Kylo Ren and allow the Resistance to escape and fight another day.

Leia Organa – By birth Leia Skywalker, Leia was the twin sister to Luke, but she was raised in secret by Breha and Bail Organa and always used her adopted name. Strong like her mother Padmé Amidala, Leia became a leader in the Rebellion and influenced galactic affairs into the age of the New Republic. She married Han Solo and they had a son, Ben. A powerful Force-wielder, she stepped away from her Force potential after a vision which told her of her role in her son’s death.

Ben Solo – Son of Leia and Han Solo, and nephew to Luke Skywalker, Ben carried on the family tradition of being strong in the Force, so much that he drew the attention of Darth Sidious and became central to the Sith Lord’s plot to undo Luke and Leia’s legacy. Taking the name Kylo Ren, he fell deep into the Dark Side during The Force Awakens and The Last Jedi, as he destroyed Luke’s academy, murdered his father, nearly killed his mother, tried to turn Rey and tried to kill his uncle. But he found his own redemption in The Rise of Skywalker, with the help of Rey. One of the more complex characters in the Star Wars universe, Ben Solo / Kylo Ren encapsulates the struggles of all the Skywalkers. 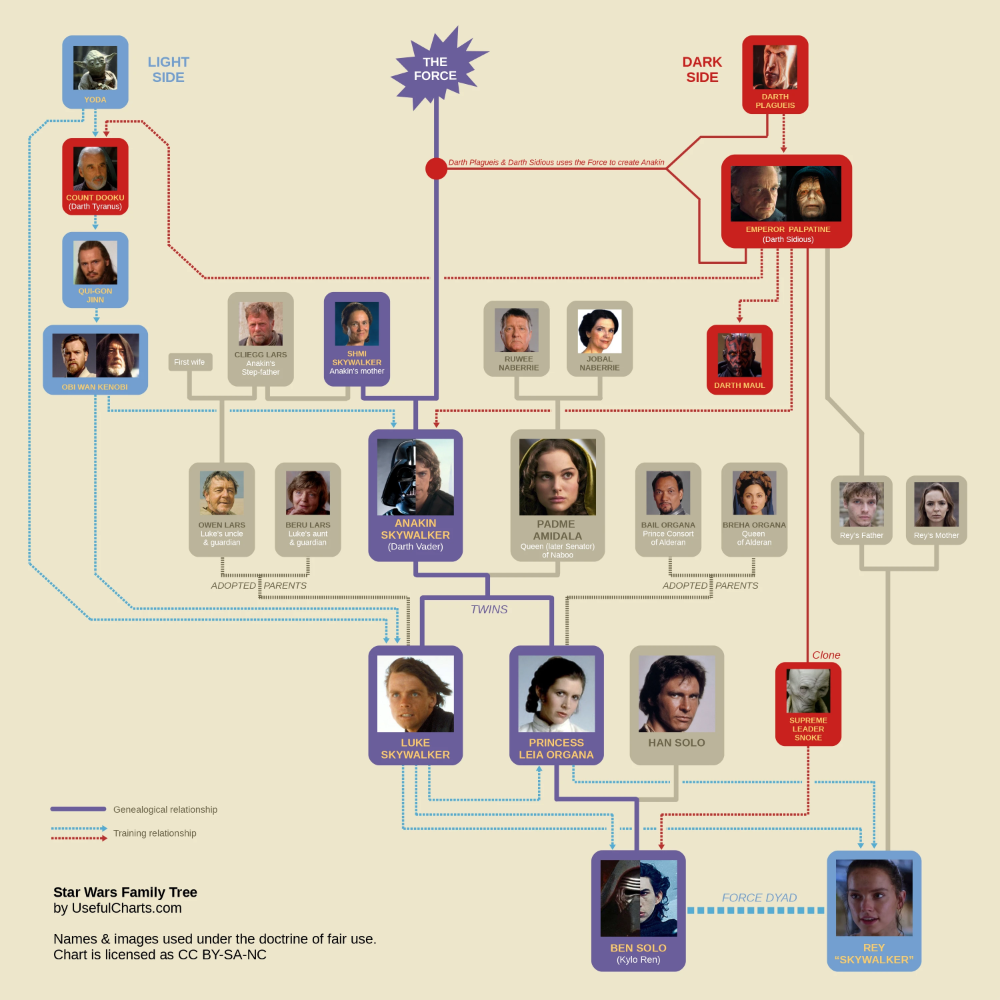 In the years following Return of the Jedi, when no new Star Wars movies were being made, many novels were written about that galaxy far, far away. The adventures of Luke Skywalker and friends continued down multiple paths, one of the most popular being the story of how Luke married Mara Jade, a former Imperial assassin, and they had a son named Ben. Leia and Han also had children, named Jaina, Jacen and Anakin.

But when Disney purchased Lucasfilm in 2012 (for one of the biggest price tags in entertainment history), the folks at Disney did a review of all the existing Star Wars properties and decided to de-canonize everything except the six movies and the animated Star Wars: The Clone Wars. As a result, Mara, Jacen and everything we read in the books is no longer canon – unless and until it gets brought back by Disney in a new form (like Grand Admiral Thrawn).

Getting involved with the Skywalkers makes for exciting times, but doesn’t always end well, as we can see in these connecting branches of the Star Wars family tree.

Cliegg Lars seemed like a good and decent man. He couldn’t possibly have known what evil he was bringing down on his son and daughter-in-law when he freed his slave Shmi and married her. To his great credit Owen Lars agreed to take Anakin’s orphan child, but in the film A New Hope Owen seems to have aged into a bitter man with little love for Luke. Even so, neither he nor Beru deserved to be shot dead and their bodies burned by stormtroopers.

Leia Organa had a much better upbringing with her foster parents, Breha and Bail. Breha was the queen of Alderaan and both parents worked hard to lovingly raise their step-daughter and give her every opportunity to shine. Unfortunately, their connection to Leia resulted in their deaths as their entire planet was destroyed in retribution for their family’s work to oppose the Empire.

Han Solo is a main character in Star Wars and plays a key role both in protecting young Luke and marrying Leia. But almost nothing is known about Han’s family, other than he hails from Corellia and his father was a pilot. We have no canon knowledge of Han’s mother. Even the name “Solo” isn’t a real name, but just a blank filled in by an Imperial bureaucrat when Han couldn’t provide a family name.

R2-D2 and C-3PO are droids, but both of these loveable characters have a connection to the Skywalker family. As revealed in Episode I, C-3PO was built by Anakin Skywalker to help his mother, and he later gave the protocol droid to Padmé. Years later C-3PO would serve as Luke’s loyal companion and then as Leia’s assistant.

R2-D2 was a maintenance droid on a Naboo starship, serving in Padmé’s entourage for years before serving with Anakin in the Clone Wars. Years later he became one of Luke’s closest friends, always carrying the true story of the Skywalkers in his databanks.

The influence of the Force

It’s clear that the Skywalker family tree is infused with the Force, but most of all in how it began. Shmi Skywalker admitted that there was no father to Anakin, a most curious detail. Although never stated openly in canon, many Star Wars fans believe that Darth Sidious (also known as Emperor Palpatine) used the Force to create life.

In a sense, then, Sheev Palpatine is Anakin’s father, bringing him into the family tree. This is important because Sheev had a real son (a clone) who married and had their daughter Rey. Kylo Ren spoke of Darth Vader as his grandfather, and Rey had to sadly recognize that Palpatine was her grandfather. This revelation, though controversial among fans, clearly puts the Sith and the Dark Side at the center of the Star Wars family tree and forces a new look at history.

But remember, it’s all just entertainment, and before we start criticizing Disney for rewriting the origins of our beloved characters, let’s remember that Star Wars has always been full of surprises. The connections between Luke Skywalker, Han Solo, Kylo Ren, Palpatine, Rey and the rest leave room for lots more epic storytelling in the future. 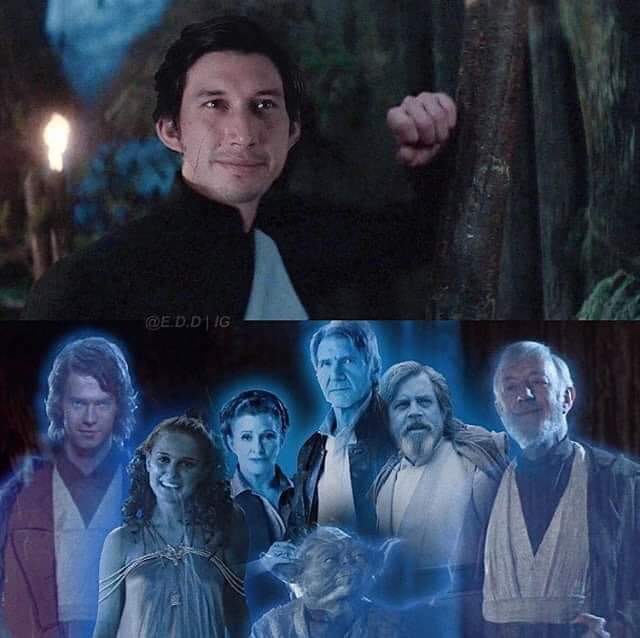