If any one Star Wars character gives us reason to laugh (often unintentionally) it’s that punk kid from Tatooine. Full credit to actor Mark Hamill for joining the fun, including this epic tweet where he finally succeeds in Luke’s original quest:

I can finally cross this off my "to-do" list.#BetterLateThanNever pic.twitter.com/3rmfEiA3tv

And here are some classic Luke-based groaners…

What’s the internal temperature of a Tauntaun? Lukewarm.

Where did Luke get his bionic hand? At the second-hand store.

Luke walks into the Mos Eisley cantina, cradling a slab of dirt in his arms. “What’ll it be?” asks the barman. “A pint for me, and one for the road.”

What kind of spaceship did Luke fly in grade school? An ABC-Wing.

When Luke joined Red Squadron everyone played a prank on him. What was it? He got a Biggs Wedgie.

What did Obi-Wan tell Luke at the rodeo? “Use the horse, Luke!”

So my friend decided to get a face tattoo of her favorite Star Wars character. You should’ve seen the Luke on her face. 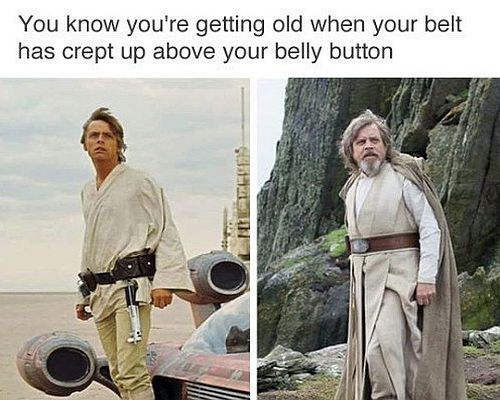 Like father, like son, the main villain of the Star Wars saga has been the butt of many Star Wars jokes, both as Anakin Skywalker and as Darth Vader.

How long has Anakin Skywalker been evil? Since the Sith Grade.

Why did Anakin Skywalker cross the road? To get to the Dark Side. 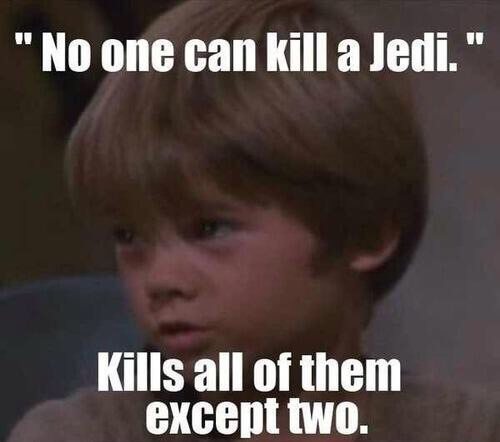 What did Darth Vader say to the Emperor at the Star Wars auction? “What is thy bidding, my master?”

How does Vader like his toast? On the Dark Side.

How did Darth Vader cheat at poker? He kept altering the deal.

Why was Darth Vader bad at sports? He always choked.

How did Darth Vader know what Luke was getting for Christmas? He felt his presents.

Yoda looks at Darth Vader and asks, “Rule the galaxy, you do. But at what cost?!” Vader thinks for a moment and replies, “It was expensive… It cost an arm and a leg.” After a short pause, Vader says, “Two legs in fact.”

How does Darth Vader eat? He Force-feeds himself.

What did Darth Vader say when the record store employee told him they were out of George Michael’s albums? “I find your lack of ‘Faith’ disturbing.”

Why was Darth Vader referred to as Lord Vader? Because calling him Master Vader made all the stormtroopers giggle.

What did Darth Vader say when he walked into a vegetarian restaurant? “I find your lack of steak disturbing.”

That wee, green Jedi Master has been a fan favorite since he first shuffled onto the screen in The Empire Strikes Back. He’s funny enough on his own, frankly, but that hasn’t stopped the Star Wars fanbase from taking it much, much further.

What did Yoda ride as a kid? A do-cycle. Because there is no tri.

Why was Yoda bad at geometry? Because to him, there are no triangles, only do-or-do-not-angles.

What did Yoda say after he turned a boy turned away when he tried to order a pie from his bakery? “Dough. Or doughnut. There is no pie.”

Why shouldn’t you ask Yoda for money? He’s a little short.

Why was Yoda afraid of seven? Because six, seven, eight.

Did you know Yoda had a last name? It was Layheehoo.

Yoda’s been tracing his family tree. It’s an evergreen. 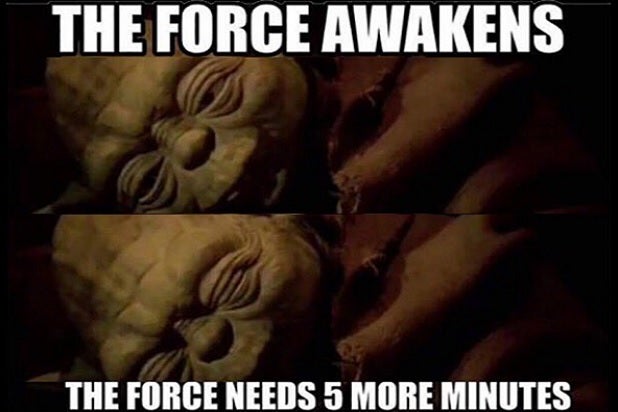 Yoda may be the master of Jedi jokes, but Obi-Wan Kenobi can cause a laugh or two.

What do you call Kenobi triplets? Obi-Three.

Which program do Jedi use to open PDF files? Adobe Wan Kenobi.

Which Star Wars character travels around the world? Globi-wan Kenobi.

Why do doctors make the best Jedi? Because a Jedi must have patience (patients… ha ha ha). 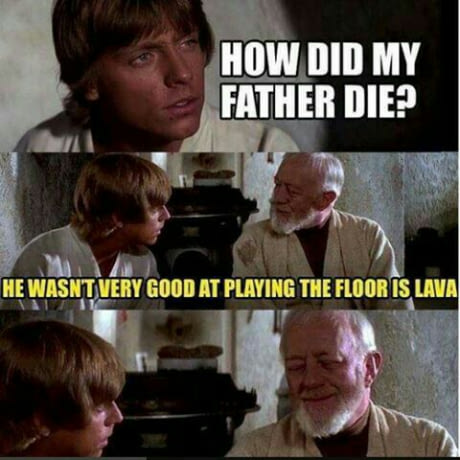 And just as Yoda leads the forces of good in Star Wars hilarity but isn’t alone, Darth Vader isn’t the only source of humor from the Dark Side and its minions.

What was Tarkin’s favorite brand of toilet paper? Charmin, to the last.

What does your Canadian friend cooking dinner for you have in common with Darth Sidious? Pal-poutine.

I went to a sale at the Maul. Everything was half off.

Why are Death Star pilots fed up with space battles? Because they always end up in a TIE.

What does a Star Destroyer wear to a wedding? Bow TIEs.

What do you call five Siths piled on top of a lightsaber? A Sith-Kabob. 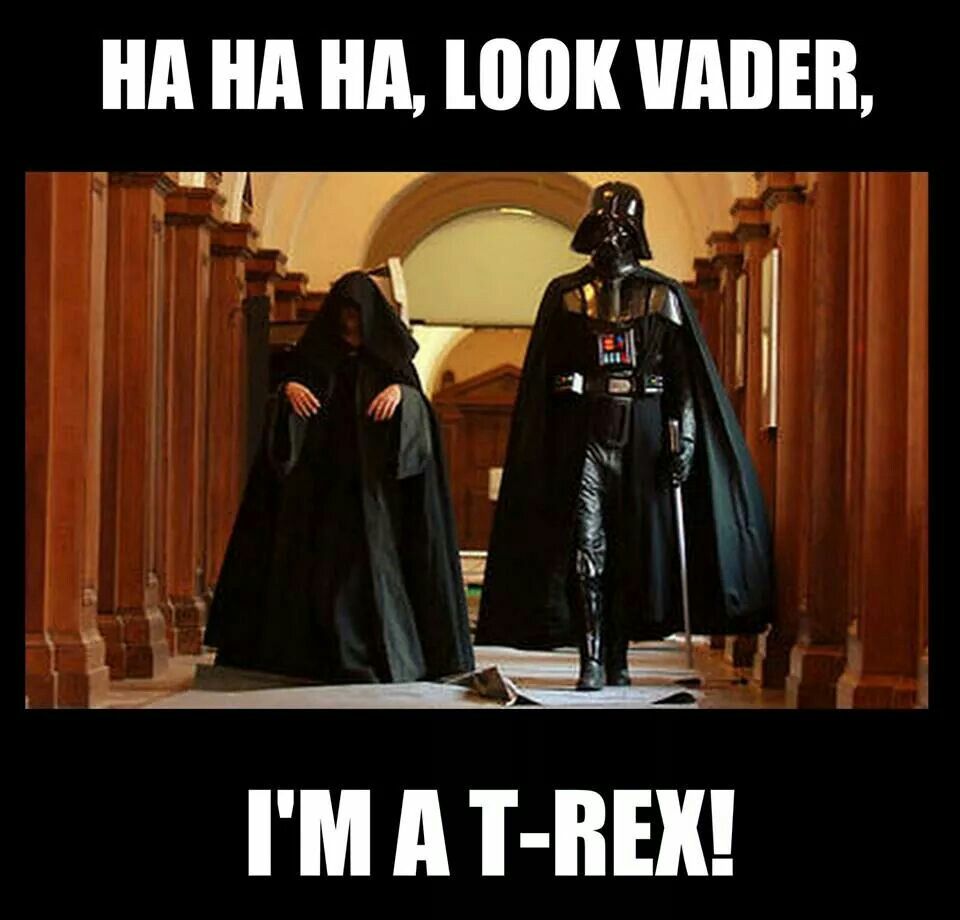 Most Star Wars droids and creatures were designed for humor, so is it any surprise that they feature in this joke list?

How does Wicket get around Endor? Ewoks.

How do Tusken Raiders cheat on their taxes? They always single file, to hide their numbers.

Why was the droid angry? Because people kept pushing its buttons.

What is R2D2 short for? Because he has little legs.

Why is a droid mechanic never lonely? Because he’s always making new friends.

An Ewok strolls into a bar and says to the bartender, “I’ll have a whisky and… soda.” The bartender says, “Sure thing—but why the little pause?” “Dunno,” says the Ewok. “I’ve had them all my life.”

Have you tried the gluten-free Wookiee treats? No, but I heard they were a little chewie.

How do Ewoks communicate over long distances? With ewokie-talkies.

How do you unlock doors on Kashyyyk? With a woo-key.

What is Jabba the Hutt’s middle name? The.

Where do Gungans store their fruit preserves? Jar Jars.

What do you call an invisible droid? C-through-PO. 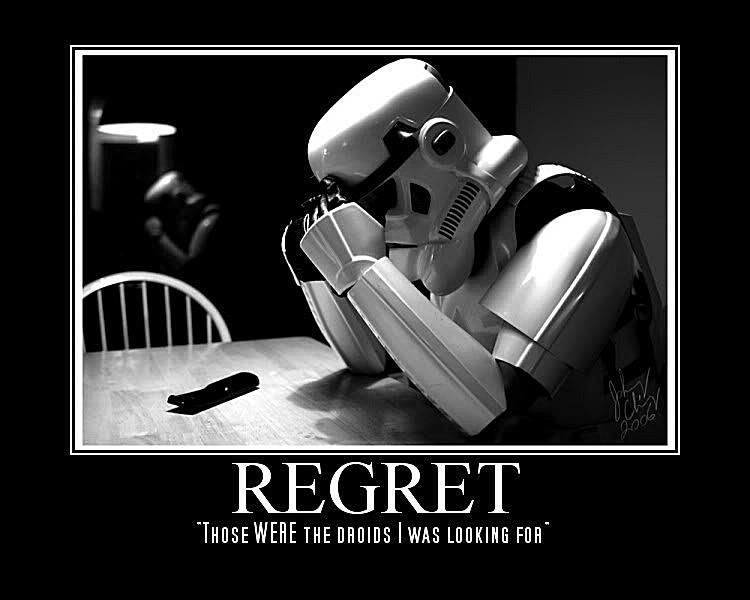 The possibilities are endless, so let’s tour a few good jokes from around the galaxy.

Han Solo changed his name when he married Leia. What did he change it to? Han Duet.

Why does Princess Leia keep her hair tied up in buns? So it doesn’t Hang Solow.

What’s the difference between Din Djarin and a time machine operated by Marty McFly? One’s a Mandalorian, and the other’s a manned DeLorean.

Why should you never tell jokes on the Falcon? The ship might crack up.

Lando Calrissian walks into a bar, orders a drink, and sits down at a table in the corner. The bartender jerks his thumb at him and says, “Lando’s a great pilot now, but I remember when they used to call that guy Crasho.”

“I’m reading a great book about Force levitation…I can’t put it down.”

What do you get if you mix a bounty hunter with a tropical fruit? Mango Fett.

What do you call Republic troopers playing Monopoly? Game of Clones.

Why did Princess Leia date so many guys before she found Han? She was looking for love in Alderaan places.

What does Kylo Ren serve at a dinner party? First hors d’oeuvres.

Trying to come up with jokes about Star Wars is difficult. Sometimes they seem a bit too forced.

The only off-color Star Wars joke in this article

And to close out our fun, here’s a Star Wars joke you don’t want to explain to your kids. 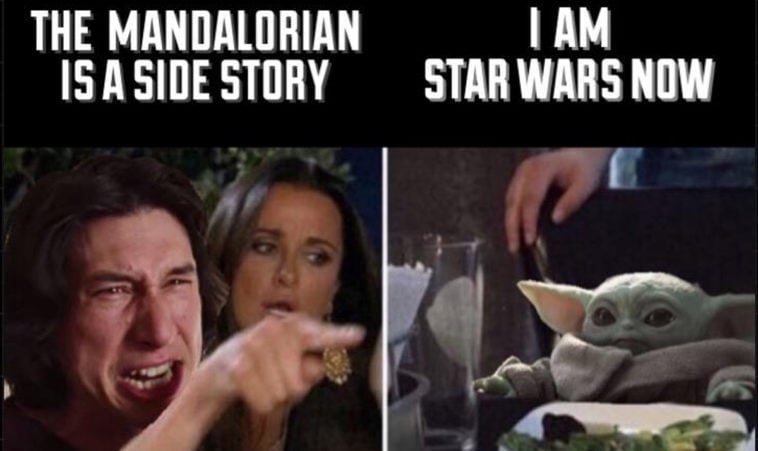