By Bennett ColesPublished On: May 26, 2021Categories: Star Wars Characters0 Comments

Thanks to Star Wars: The Clone Wars, many of the soldiers who fought bravely in the galactic war that raged between Attack of the Clones and Revenge of the Sith have rich and sympathetic backstories. But one clone who may not deserve the admiration he generally receives is Commander Wolffe.

One of many heroes in Star Wars: The Clone Wars

There’s no doubt that Commander Wolffe, clone designation CC 3636, served with distinction, fighting bravely in the clone wars. His 104th Battalion, a tight-knit unit known as the Wolfpack, served with honor in many battles. As a captain, Wolffe served originally on Kamino but when promoted to commander he took over the 104th and made it his own.

A rough start to his command

Disaster strikes his unit early in the war, when the ship transporting the 104th is destroyed by General Grievous and his new warship Malevolence. The only survivors are Commander Wolffe, two of his clone troopers and Jedi General Plo Koon. Wolffe rises to the occasion and despite the tragedy he fights the battle droids who are hunting down survivors in escape pods. Wolffe, Plo Koon and the two troopers are rescued by Anakin Skywalker and Ahsoka Tano.

Having lost his entire unit, Commander Wolffe sees early the worst the war has to offer. To his credit, though, he fights on bravely, proudly rebuilding the 104th and instilling loyalty among his men so much that their unit becomes synonymous with its commander.

How did Wolffe lose his eye?

During the clone wars Commander Wolffe fights in many battles, far too many for them all to have been displayed on screen. Star Wars lore tells us that Wolffe loses his eye at the Battle of Khorm while fighting directly against Asajj Ventress. Although this battle isn’t technically canon, we often see the seasoned and battered combatant Wolffe fighting bravely, proudly brandishing his battle scars later in the series, and it’s cool to think that at least one mission saw him in action against Asajj Ventress. 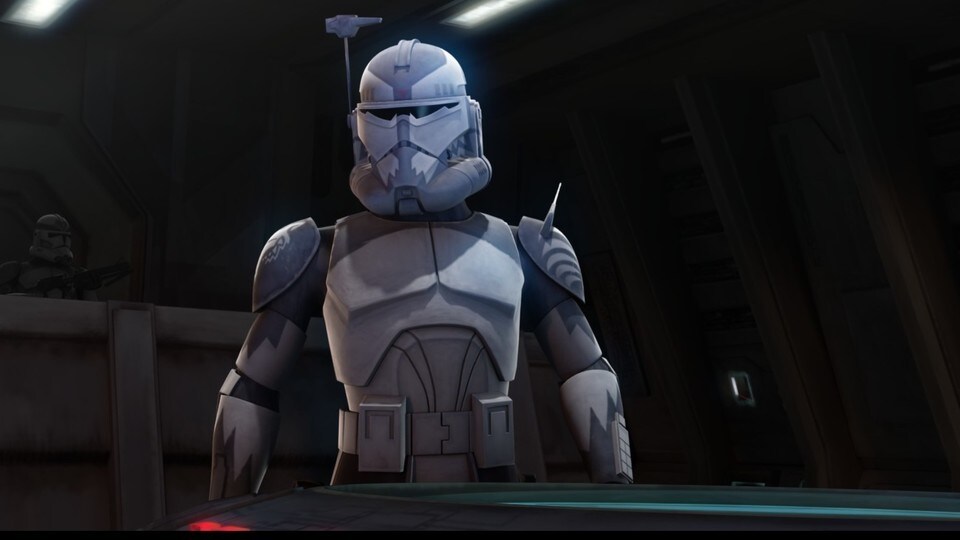 Wolffe was good, but he was no Rex

Commander Wolffe earns an excellent reputation throughout Star Wars: The Clone Wars, mainly for coming to the rescue of allies, be they Jedi master, fellow troopers or even civilians. On the planet Aleen, Wolffe leads a mercy mission to help the local population with supplies and restore their power. The Wolfpack, a seasoned combat force, are put on the back foot somewhat by this mission and Commander Wolffe’s impatience with C-3PO reveals a less-forgiving nature than other clones like Captain Rex.

Savior in many ways

But he comes through when needed most, rescuing Jedi like Anakin Skywalker, Ahsoka Tano, Obi-Wan Kenobi and even Mace Windu from tough scraps on Felucia, Vanqor (with help from R2 D2), Kadavo and even the Citadel on Lola Sayu. Wolffe served in space and planetside, helped hunt down General Grievous, and was a leader respected by Jedi, crew and soldiers alike. As commander of the tight-knit Wolfpack, Commander Wolffe was justifiably well-known for his battle scars and instilling loyalty in his clone troopers.

Commander Wolffe was a consistent part of the supporting cast in Star Wars: The Clone Wars and always a welcome addition to the series.

But The Clone Wars Didn’t End Well For The Jedi

So far, so good. Nobody doubts that Commander Wolffe stayed true to his code of honor and he finished the clone wars as commander of the Wolfpack, still fighting alongside Jedi Master Plo Koon. But as the Republic was transformed into the Empire, we all know what happened next.

Years later, when the Ghost crew tracks down Wolffe, Rex and Gregor, the meeting doesn’t start well. Wolffe is terrified to see Jedi, and his first thought is to shoot, thinking they’ve come for revenge. Later, Rex tells Kanan that he, Wolffe and Gregor all removed the chips that would have forced them to obey Order 66, suggesting that they rebelled against their programming before Palpatine issued his order.

Nice to believe, except we know from the final episode of Star Wars: The Clone Wars that Rex didn’t remove his chip: Ahsoka Tano removed it from him. And until she did, he was powerless to stop himself from obeying. Maybe Rex found Wolffe and Gregor later and got the chips out, but surely not until after Order 66 had taken its grim toll.

Looking carefully at the footage of Revenge of the Sith, the pilots who actually shot down Jedi General Plo Koon appear to be just common clones. Commander Wolffe was probably in orbit coordinating the battle. So did he pull the trigger on his Jedi general personally? Maybe not, but his hands are hardly clean.

I can imagine Commander Wolffe standing at the head of the Wolfpack, in the shadow of the ruined Jedi Temple, thinking about Master Plo Koon and the rest of the Jedi Council who were hunted down and slaughtered. Did he compare trophies with Cody, Fox and the others – or did he come to regret his decision? The image Captain Rex tries to create for the Ghost crew isn’t quite as black and white as everyone wants to believe.

Commander Wolffe is a Tarnished Hero

We can try to be sympathetic. As a combatant Wolffe has witnessed countless deaths and no doubt his conscience weighs heavily on him, as it it clearly does Rex. Gregor comes across, quite frankly, as insane, which is not unlikely considering the guilt he carries within him.

(That would be an interesting side story for Star Wars to explore. What did happen to all the clones who were directly involved in killing Jedi? I can imagine there were a lot of suicides among the troopers under Vader’s command at the Temple. Could be a dark and poignant story to tell…)

But even if we can forgive Commander Wolffe for his actions during Order 66 – he had no choice after all – his later actions do little to rescue our opinion.

After the wars, clone Commander Wolffe was decommissioned along with the rest of his clones, making way for the new troopers with loyalty solely to the Empire. Somehow he, Rex and Gregor got their hands on an AT-TE and decided to hide out on a remote world. Perhaps retired Commander Wolffe, clone war veteran, just wanted to get as far away from everything as possible.

When redemption is offered, Wolffe, don’t blow it

We get another look at Wolffe years later in Star Wars: Rebels, when the crew of the Ghost arrive unexpectedly, having tracked Rex down thanks to Ahsoka Tano. Wolffe’s initial, defensive reaction might be understandable, but what does he do next?

Does he offer to help these Jedi rebels as atonement for killing Master Plo Koon? Does he remember the glory days of the clone wars and stand up to do what’s right? No. He sells out the rebels by contacting the Empire and revealing their position.

Seriously? In what universe is that a good or noble thing, clone Commander Wolffe?

Oh sure, he apologizes once the rebels find out. He proves that he’s still a master AT-TE driver when those same rebels are forced to fight three AT-AT’s. But none of that would have been necessary if Wolffe had just kept his damn mouth shut.

A betrayal worthy of Anakin Skywalker

Star Wars sometimes shies away from the dramatic moments, and this is one of those missed opportunities. Clone Commander Wolffe willingly sold out friends of Ahsoka for no discernable motive other than hunting down Jedi is what he thinks is right.

Rex should have shot him. But I get it that clones are brothers, and those bonds run deep. Kanan should have skewered him. But I suppose revenge is not the Jedi way. But then Sabine should have popped him, or Zeb should have crushed his skull like a melon. Didn’t anybody hold him accountable for his betrayal?

I suppose we should be grateful that Wolffe wasn’t invited back to join the rebels. But at least we should have seen Rex taking Wolffe aside after the AT-AT battle and telling him what a disgrace he was.

What happened to Commander Wolffe after Star Wars: Rebels?

Wolffe and Gregor show up one more time in Rebels, giving a less than stellar performance as supporting players in the liberation of Lothal. After that, there are no further canon appearances in Star Wars for Wolffe. We can safely assume that he continued to plod across the lonely wastelands in the AT-AT he commandeered after the battle that wrecked the AT-TE. 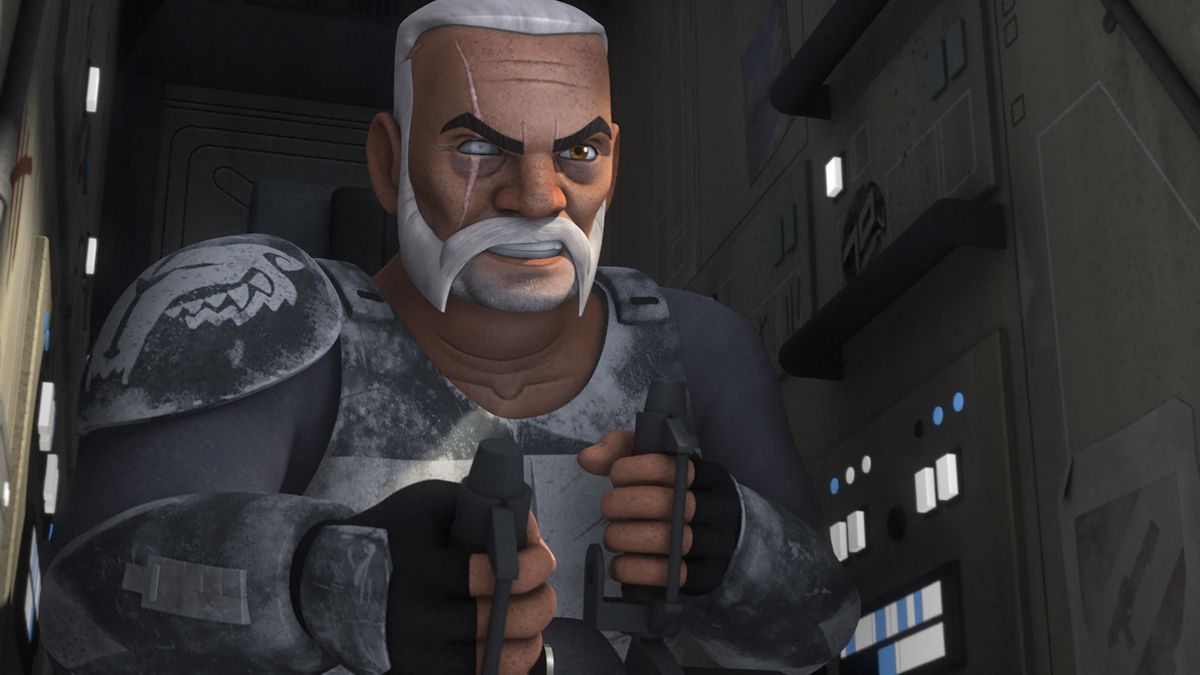 Betrayal is hard to undo, Commander

In all of Star Wars, clone Commander Wolffe is perhaps the most despicable character, right up there with DJ, Ki Adi Mundi and Salacious Crumb. Sure, he led plenty a rescue and fought no shortage of battles in Star Wars: The Clone Wars, but so did all the other clones. And maybe we can’t hold him accountable for his participation in Order 66, because it was literally in his make-up to obey.

But in Star Wars: Rebels Wolffe shows his true colors. And there’s no explaining that away. It’s just unfortunate that the storytelling didn’t do justice to his betrayal. So what happened to Wolffe after Star Wars: Rebels? Who cares. Star Wars is a better place without him.