Why the Future of Star Wars Lies in Grand Admiral Thrawn

Star Wars has given us plenty of awesome villains over the years, but one weakness they all have is their one-dimensional nature. The Emperor was evil incarnate. Darth Maul was rage incarnate. Grand Moff Tarkin was the ultimate bureaucrat. Jabba was the ultimate gangster. Fabulous villains, all – but they each served a singular purpose and when we look at characterization they’re pretty straight-forward.

And then there’s Grand Admiral Thrawn. Recent developments have revealed that he’s returning to the Star Wars franchise in live action, and this is great news. Audiences of the 2020’s appreciate nuanced villains who represent a genuine threat but who also have sympathetic motives. They can be dastardly, but in a way that’s relatable. Star Wars was originally created with a clear white and black, good versus evil axis of morality – which was fine in 1977 – but to remain relevant the franchise needs to grow.

Great work has been done in recent years to create nuanced heroes like Din Djarin and Boba Fett but nuanced villains have remained elusive. You might argue that Kylo Ren is the first of this kind, but ultimately Ren redeems himself and becomes a hero. What Grand Admiral Thrawn represents is a villain who remains a villain through and through, but is still nuanced, believable and even, in his dark way, likable.

Who is Grand Admiral Thrawn?

If you haven’t read any Star Wars books or watched Star Wars: Rebels, you might have been puzzled in The Mandalorian Season 2 when guest star (and amazing character in her own right) Ahsoka Tano asked the big question of her vanquished foe: “Where is Grand Admiral Thrawn?”

Who? Maybe you thought it was just a big moment to introduce a new villain.

But if you were in the know, you probably squeeeed like I did to learn that one of the best villains in Star Wars is finally coming to live action. (Because apparently, in some corners of fandom, a character isn’t fully real until they’ve been in live action.) 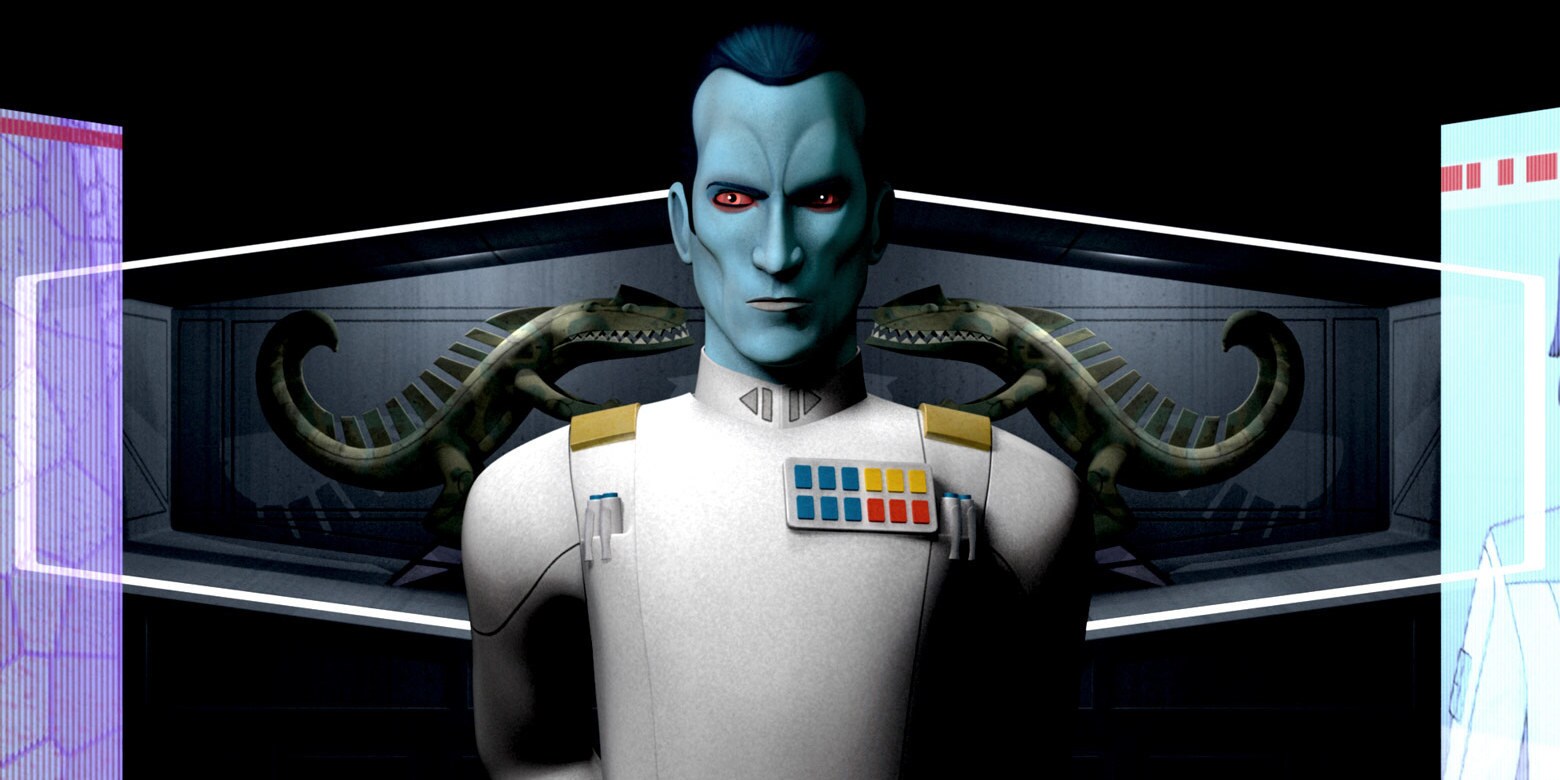 Grand Admiral Thrawn was originally introduced in the novel Heir to the Empire by Timothy Zahn, published by Del Rey in 1992 and, at the time, declared the George Lucas-approved, canon sequel to Return of the Jedi. In the book and its two sequels, the main antagonist was a mysterious, blue-skinned chiss with glowing red eyes who was the new leader of the remaining Imperial Navy. Right away we saw that he was different. He didn’t cackle, or gloat, or use the Force. He was calm, cunning and always several steps ahead of his enemies. He was unique among Star Wars villains.

Thrawn’s popularity was enormous and he became a centerpiece of what became known as the Star Wars Expanded Universe, the dozens of novels written over the next twenty years that carried on the tales of Luke Skywalker and his friends after the fall of the Galactic Empire.

But then Disney bought Star Wars and declared everything but the movies and Clone Wars to be no longer canon. As my friend gleefully  crowed after the announcement, “So long, Thrawn!” Like Mara Jade, Darth Krayt and a host of other beloved book characters, Grand Admiral Thrawn was relegated to “Star Wars Legends” as the old Expanded Universe was now called.

As a major villain hugely popular with Star Wars fans, however, Lucasfilm wisely found a way to bring Thrawn back into canon. Introduced as the major threat to the Ghost crew in Seasons 3 and 4 of Star Wars: Rebels, Grand Admiral Thrawn dominated every scene he was in. Much was as how fans expected: he was still an Imperial officer, wearing his signature white uniform befitting a grand admiral; he was still a favorite of Emperor Palpatine who commanded a star destroyer and frequently commandeered other Imperial forces; he was still a member of the chiss alien species, meaning he was still a blue-skinned humanoid with a solid build; and, most importantly, he was still a brilliant tactician.

What made Grand Admiral Thrawn so intimidating (and respected) was that he kept winning. Unlike so many bumbling officers in the Imperial military who were repeatedly foiled by Ezra Bridger, Sabine Wren and company, Thrawn was rarely fooled, and if so rarely for long. His tactical brilliance defeated the young Rebellion over and over, and he was ultimately defeated only through the extraordinary efforts of Ezra Bridger in the Rebels series finale. And even then, he merely disappeared.

Which Thrawn is the “real” Thrawn?

Many fans of the Expanded Universe might nitpick the changes to their beloved grand admiral, and there’s no denying that events in Star Wars: Rebels do rewrite his story. But maintaining Legends continuity has never been a priority for Lucasfilm – they’ve instead taken the best elements of “lost” characters and worked them into new stories. Personally, I liked Thrawn from the original novels (which have since become known as the “Thrawn Trilogy”) but I like Thrawn from Rebels as well. The fact that his story has changed doesn’t get in the way of my appreciating him.

And Lucasfilm is developing an excellent track record for re-engineering elements of Legends and re-presenting them – often adapted to fit new circumstances – and I’m confident that Thrawn’s best moments will all find their way back into canon somehow.

Perhaps the question of which is the “real” Thrawn can finally be settled now that author Timothy Zahn has written an all-new Thrawn Trilogy in line with the Disney canon. Film and prose characters are once again in alignments. The rest is the stuff of legends…

But why is Thrawn’s mention in The Mandalorian Season 2 so important? He was defeated in the Rebels finale in a satisfying way and no-one would have criticized Lucasfilm if they’d just ended his story there.

It’s important because Grand Admiral Thrawn has more potential than anyone to become the new Big Bad Guy of the Star Wars universe. This is good news for Star Wars fans.

Again, if you’ve never read Heir to the Empire or watched Star Wars: Rebels, you still might be scratching your head. So just trust me: Thrawn is an amazing villain. Some commentators have called him the “Sherlock Holmes of Star Wars” in the way he puzzles out clues and outmaneuvers his opponents, but I’d like him more to Sherlock’s arch-nemesis, Moriarty. Moriarty was just as intelligent, cunning and ambitious as his Baker Street opponent – but he was also utterly ruthless.

Emperor Palpatine certainly shared many of these traits, but as a Sith Lord he carried a lot of “spiritual” baggage that by necessity ate up screen time. Darth Sidious was obsessed with power and wanted to rule the galaxy to serve his own ego. He destroyed the Republic out of spite, took great efforts to hunt down any Jedi master who’d escaped Order 66, and built the Death Star to rule through terror. Such was the Sith way.

Thrawn served the Empire not because of any loyalty to Palpatine, but because it suited him to do so. As a member of the  Chiss Ascendancy from the Unknown Regions of the galaxy, Thrawn comes with a separate agenda quite distinct from the Empire, the Rebel Alliance or the New Republic. This makes him mysterious, unpredictable and very, very dangerous.

How does Thrawn compare to Darth Vader?

Even the mighty Darth Vader was merely the greatest of the Emperor’s followers, a pawn in the Sith game of power and domination. Thrawn needed the power of the Empire to serve his greater purpose, not the other way around.

The two characters are actually matched up in one of Timothy Zahn’s new books, and it’s clear that, despite Vader’s impressive powers and control of the Force, Thrawn has the advantage. I think this imbalance may be due to the original creation of Darth Vader as a singular force of evil, whereas Thrawn from the start was created as a more nuanced character.

Thrawn’s name being mentioned by Ahsoka in The Mandalorian caused great excitement, and fans have been speculating ever since when he will make his live action debut. It’s already been confirmed that Lars Mikkelsen, the actor who voiced Thrawn in Rebels, has been cast in the live action role.

The smart money is currently on the upcoming Disney series Star Wars: Ahsoka, with Rosario Dawson as the series lead, where the title character will join up with Sabine Wren and pick up where Rebels left off, as the two women search for Ezra Bridger. Ezra disappeared in the final episode alongside Grand Admiral Thrawn, and wherever in the galaxy Ezra ended up, we can assume that Thrawn will be nearby. 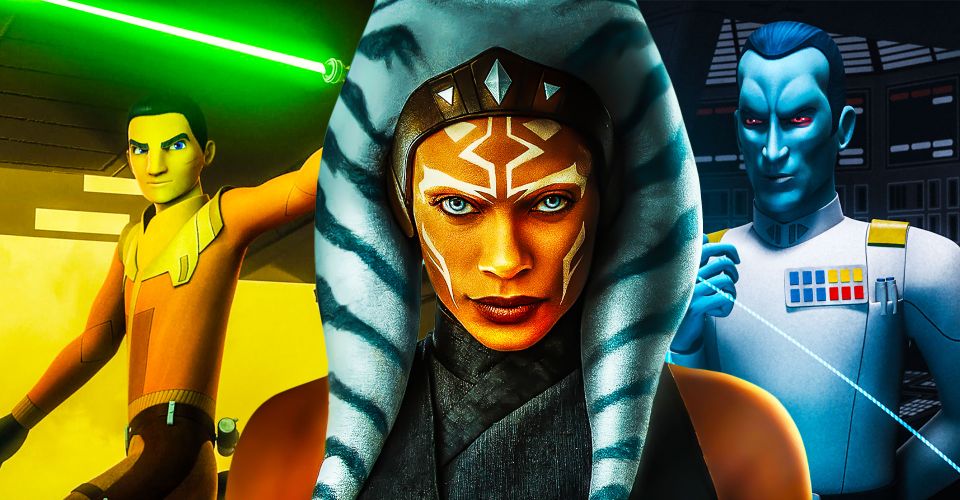 But Lucasfilm has several options for bringing everyone’s favorite chiss back into the story. Depending on how the Disney streaming calendar plays out, Thrawn’s first appearance could occur in Season 3 of The Mandalorian, as Din Djarin might find himself on another quest to protect Baby Yoda from the secret cloning efforts of the Empire. Knowing Thrawn’s character from his many previous stories (both canon and legend) we can expect the chiss to be the ultimate power behind these efforts by the remnants of the Empire.

What is Thrawn’s real motivation?

This creates an amazing opportunity for strong continuity and overlap between The Mandalorian, Ahsoka and any new movies or series based in the time period between Return of the Jedi and The Force Awakens. Yes, we all know that Emperor Palpatine will one day return (boo – Rise of Skywalker sucks!), but in the thirty years between Episodes XI and XII there’s plenty of room for Thrawn to wreak havoc.

We don’t know what kind of bigger threat from the Unknown Regions Thrawn faces, and it could be that he now considers the Jedi, the Rebels and even the Mandalorian warrior code to be assets for him to use. If Thrawn dons the white tunic of an Imperial officer again, it will only be because the goals of the Chiss Ascendancy are best served by him doing so.

This is one of the reasons why bringing Thrawn back as the ultimate villain holds so much promise. Yes, he’s awesome and dangerous, but what is he really fighting? And is it even what we expect?

Perhaps the ancient battle between Jedi and Sith is a sideshow to him. Perhaps the Rebellion to overthrow the Empire was a nuisance that he can now turn to his advantage. Maybe there’s something even worse than Emperor Palpatine out there in the galactic wastes, and only Thrawn knows how to defeat it.

This would give us all kinds of opportunities for new characters to fight alongside the Rebels and our Mandalorian friends. But whether the galactic battle stays on the familiar ground of the New Republic or it ventures out into the Unknown Regions, if Grand Admiral Thrawn is at the center of things, we can rest assured that it will be epic.