I Have a Bad Feeling About This: A Phrase to Capture the Mood of the Galaxy

The most famous phrase in Star Wars is definitely, “I am your father,” but to serious Star Wars fans there’s another phrase to watch for: “I have a bad feeling about this.” It’s a little thing said in a campy movie that grew into a cultural phenomenon, and now no Star Wars movie is complete without it.

Don’t believe me? Search the films. This line is said in every movie.

Who says “I have a bad feeling about this?”

Who doesn’t? Han, Luke, Leia, Lando, Obi-Wan, Darth Vader (as Anakin Skywalker) and no less than three droids get to drop this pessimism bomb on screen. And that’s just the movies. Watch the first season of Star Wars: The Clone Wars and you’d think that George Lucas ordered his writers to ensure a clone trooper uttered the phrase at least once an episode.

How many times do they say “I have a bad feeling about this?”

Just sticking with the 11 live-action Star Wars movies, there are 13 instances of this phrase (or something very close) being said. It’s become a 45-year running gag and every Star Wars film pays homage. Still don’t believe me? Let’s break it down, film by film.

Got a Bad Feeling in the Original Trilogy

In A New Hope, the original Star Wars movie that launched us down this galactic path, we hear the line said twice, although the exact wording was still loose. Luke Skywalker says it as the Millennium Falcon is caught in the tractor beam of the Death Star and our heroes get their first look at this enormous super-weapon. Luke’s actual words are, “I have a very bad feeling about this.”

Good instincts, Luke, since they get dragged into the Death Star and have to avoid capture while rescuing Princess Leia and finding a way to escape. Part of that plan includes a trash compactor, inspiring Han Solo to mutter, “I’ve got a bad feeling about this.”

R2-D2 saved our heroes from the trash compactor and certain death, but not long after they witness the last Jedi in the galaxy, Obi Wan, being cut down by Darth Vader (former apprentice Anakin holding a really bad grudge). I can see why our heroes struggled with optimism.

A really bad feeling was often the best response

Luke and friends made it out of the Death Star, and came back to blow up the stupid thing for good measure, but in the years that followed events didn’t often go well.

In The Empire Strikes Back, Han Solo, Chewbacca, Princess Leia and C-3PO have escaped Imperial pursuit by hiding in an asteroid, but Leia gets a sense that all is not well as they exit the Falcon to explore. She says “I have a bad feeling about this,” just before they realize that they’re actually inside a giant space slug. Things go downhill rapidly from there.

That bad feeling is someone wanting to eat you

Return of the Jedi is often considered the most light-hearted Star Wars episode, but even it brings out the famous line, not once but twice. The film starts on an ominous note as our two favorite droids approach Jabba’s palace. C-3PO turns to R2-D2 and says, “I have a bad feeling about this.”

Return of the Jedi continues its pessimism all the way to Endor, when Han Solo says, “I have a really bad feeling about this,” as the ewoks prepare to cook him for dinner. Not that I’m criticizing C-3PO or Han for their feelings, but it reminds us that Return of the Jedi could have ended very differently (and gruesomely).

Got a Bad Feeling in the Prequel Trilogy

When George Lucas decided to go back into Star Wars history and bring us Phantom Menace, Attack of the Clones and Revenge of the Sith, he played around with a lot of Star Wars lore (don’t get me started on midichlorians…) but apparently one line was now considered essential to the movies: “I have a bad feeling about this.”

Even Obi-Wan Kenobi had a bad feeling

And Lucas didn’t waste time. In Phantom Menace, the very first line Obi Wan Kenobi says in response to the curious reception he and Qui Gon Jinn receive is, “I have a bad feeling about this.” (I guess the writers wanted fans to make that early connection between the new film and the films from a generation before.) Qui Gon seems more the optimist, but we all know how his story ends.

In Attack of the Clones, the now-expected line is uttered by Anakin Skywalker as he and Padme are dragged into the execution arena on Geonosis, modified slightly to, “I’ve got a bad feeling about this.” I guess we can thank the excellent schooling Obi Wan Kenobi received for his better diction than Anakin and his desert rat charm.

But Obi Wan gets to say the line one more time in Revenge of the Sith, as his ship and Anakin’s careen toward a closing blast door in the flagship of General Grievous. Despite the chaos of battle and very real threats to his health and safety, Obi Wan almost sighs as he says, “Oh, I have a bad feeling about this.”

Got a Bad Feeling in the Disney Trilogy

When the news broke that Disney was going to continue the Star Wars saga, fans eagerly awaited the return of Luke Skywalker and friends, of the Force, of stormtroopers, droids and the Millennium Falcon. The Force Awakens, The Last Jedi and The Rise of Skywalker delivered in many ways, including this little tradition.

If there was any new hope that this famous line might be heard in the new trilogy based a long time ago, it was realized in The Force Awakens shortly after the first of the original characters, Han Solo, reappeared on the scene. Realizing that rathtars are loose on his freighter, Han accepts the news with the ultimate understatement: “I got a bad feeling about this.”

Who said “I have a bad feeling about this” in The Last Jedi?

There’s some controversy about The Last Jedi, as fans initially claimed that it was first Star Wars film not to include the (in)famous line, “I have a bad feeling about this.” Many a search was made, with hours spent poring over every scene, and at first it seemed that the phrase may not have been spoken.

But director Rian Johnson published an official response, indicating that the droid BB-8 was the character who said the line, bleeping furiously at Poe Dameron during the opening space attack. While we don’t get a translation on screen, we do hear Poe reply, “Happy beeps, buddy!” And General Leia Organa chimes in, “Just for the record, Commander, I’m with the droid on this one.” 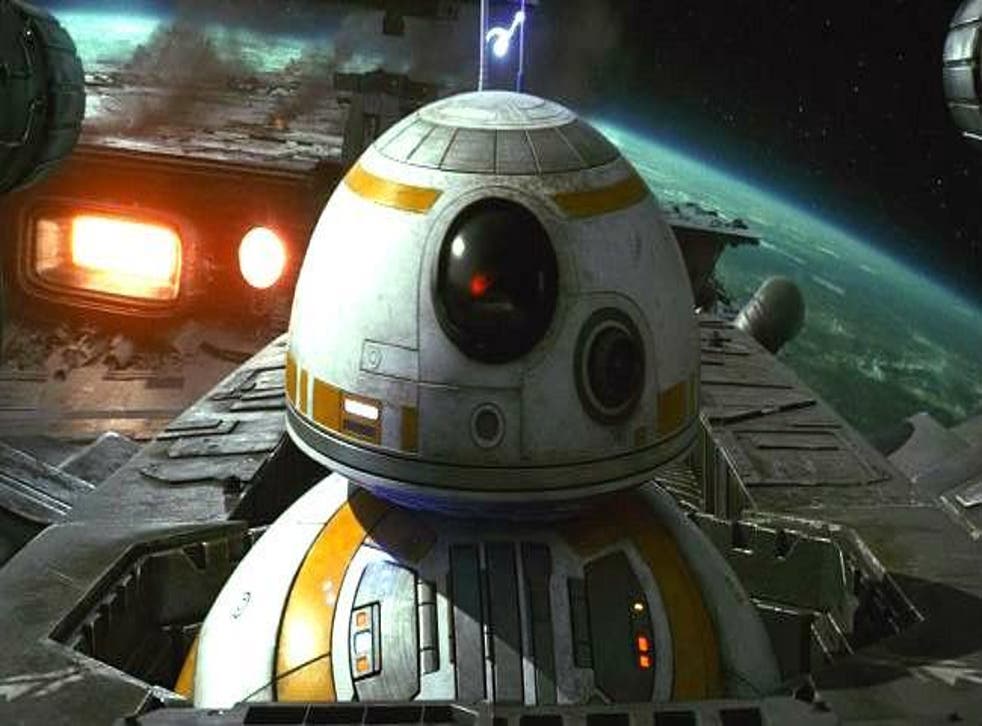 The Rise of Skywalker returned to a more traditional delivery, with Lando Calrissian watching the First Order troops descend on the planet Pasaana and mutter, “I got a bad feeling about this.”

Still Got That Feeling, Everywhere in Star Wars

So, every Star Wars episode in the Skywalker Saga has the line, but what about the rest of the Star Wars franchise? What about Rogue One, Solo, The Clone Wars and beyond?

Rogue One: A Star Wars Story was the first of these new films, and it delivered on all counts, including paying homage to this Star Wars tradition. In the movie it’s K-2SO who says the line, shortly before the Battle of Scarif begins, although he’s cut off by Cassian Andor before he can actually finish saying it.

It’s in Solo: A Star Wars Story that we finally see a real twist on tradition, though. Young Han Solo is flying the Millennium Falcon for the first time, maneuvering the ship through the deadly space perils around Kessel. Things are desperate, they could all die, but as Han takes the Falcon into the maelstrom he turns with a hopeful grin and says, “I have a really good feeling about this!”

As I mentioned earlier, Star Wars: The Clone Wars picked up the tradition, but we don’t hear it explicitly in Star Wars: Rebels or, to date, The Mandalorian. There’s no question that many a character in these shows has a bad feeling (or even a good feeling) from time to time but I guess they just haven’t spoken it out loud.