When Star Wars first released, it was considered by most studio execs to be a silly, summer flick of no consequence. One of the only reasons it was taken seriously at all was the fact that George Lucas had secured not one but two famous British actors in major supporting roles. The first was Alec Guinness as Ben Kenobi, and the second was Peter Cushing as Grand Moff Tarkin.

Darth Vader may have been the Big Baddie of the movie, but it was Tarkin who brought the menace of the Empire to life in his cold, sinister style. Fans loved the character, but most North American audiences had no idea who this charismatic actor was.

Peter Wilton Cushing was born in Kenley, England in 1913 to George Edward Cushing and Nellie Maria Cushing. He was drawn toward an acting career at an early age, landing his first role in 1939. He played a variety of parts in his early career, but quickly became a regular with the prolific British production company Hammer Films. Famous today for their campy consistency, Hammer movies were cutting edge at the time and helped to launch the careers of many great British actors. Peter Cushing often worked alongside Christopher Lee and Vincent Price, the trio becoming the three pillars of the genre during the 1950’s and 60’s. Cushing attributed much of his success to the on-screen chemistry he enjoyed with his fellow actors. 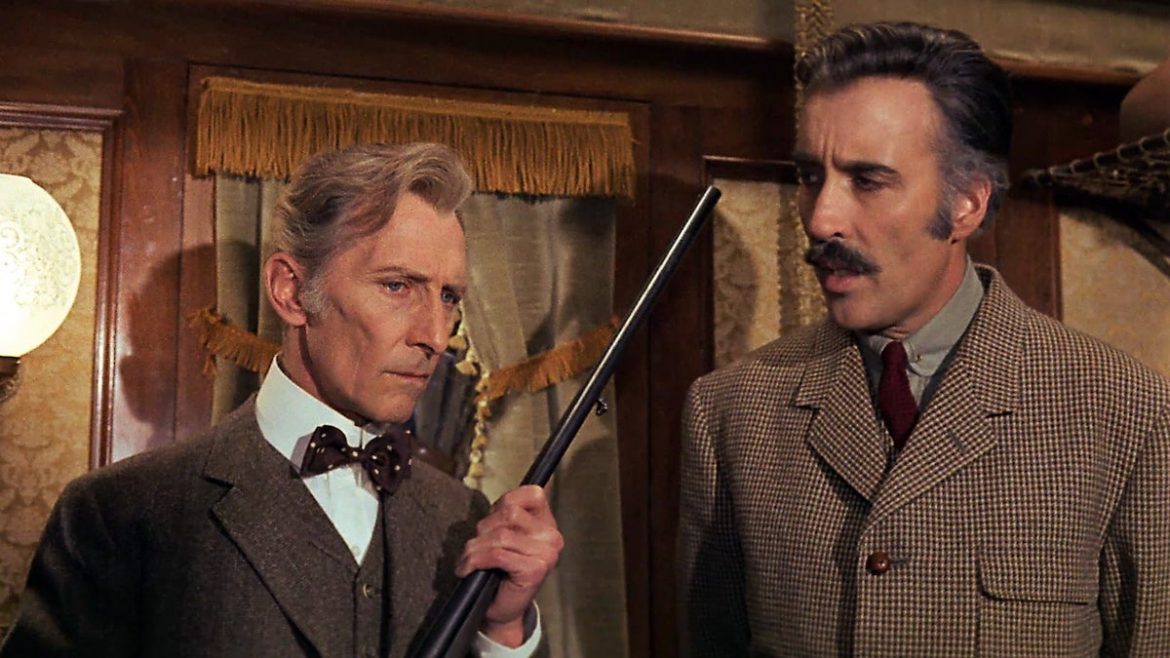 Cushing was perhaps most famous for his role as Professor Van Helsing in multiple Dracula films (opposite Christopher Lee as the vampire), but this talented actor was versatile and able to play the hero or the villain equally well. Although appreciative of his success in the horror genre, Cushing consciously attempted to widen the variety of characters he played throughout his acting career. At different times Cushing portrayed Sherlock Holmes in movies and TV, Archaeologist John Banning in The Mummy, Gustav Weil in  Twins of Evil, the Sheriff of Nottingham in Sword of Sherwood Forest, Christopher Maitland in The Skull, and even Mr. Darcy in Pride and Prejudice. His turn as Winston Smith in 1984 was nuanced and the film drew considerable attention from the media as being ahead of its time.

Learning to upstage a monster

Aside from Doctor Van Helsing, Peter Cushing was perhaps best known for his role as Baron Victor Frankenstein. The classic novel by Mary Shelley had already been adapted to film several times, often with the focus on Frankenstein’s monster, but this film gave Cushing a chance to lift Baron Victor Frankenstein beyond being a mere sidekick to the monster and make him a complex character in his own right.

Although no-one knew it at the time, his portrayal of Victor Frankenstein foreshadowed the role that would make him famous around the world. 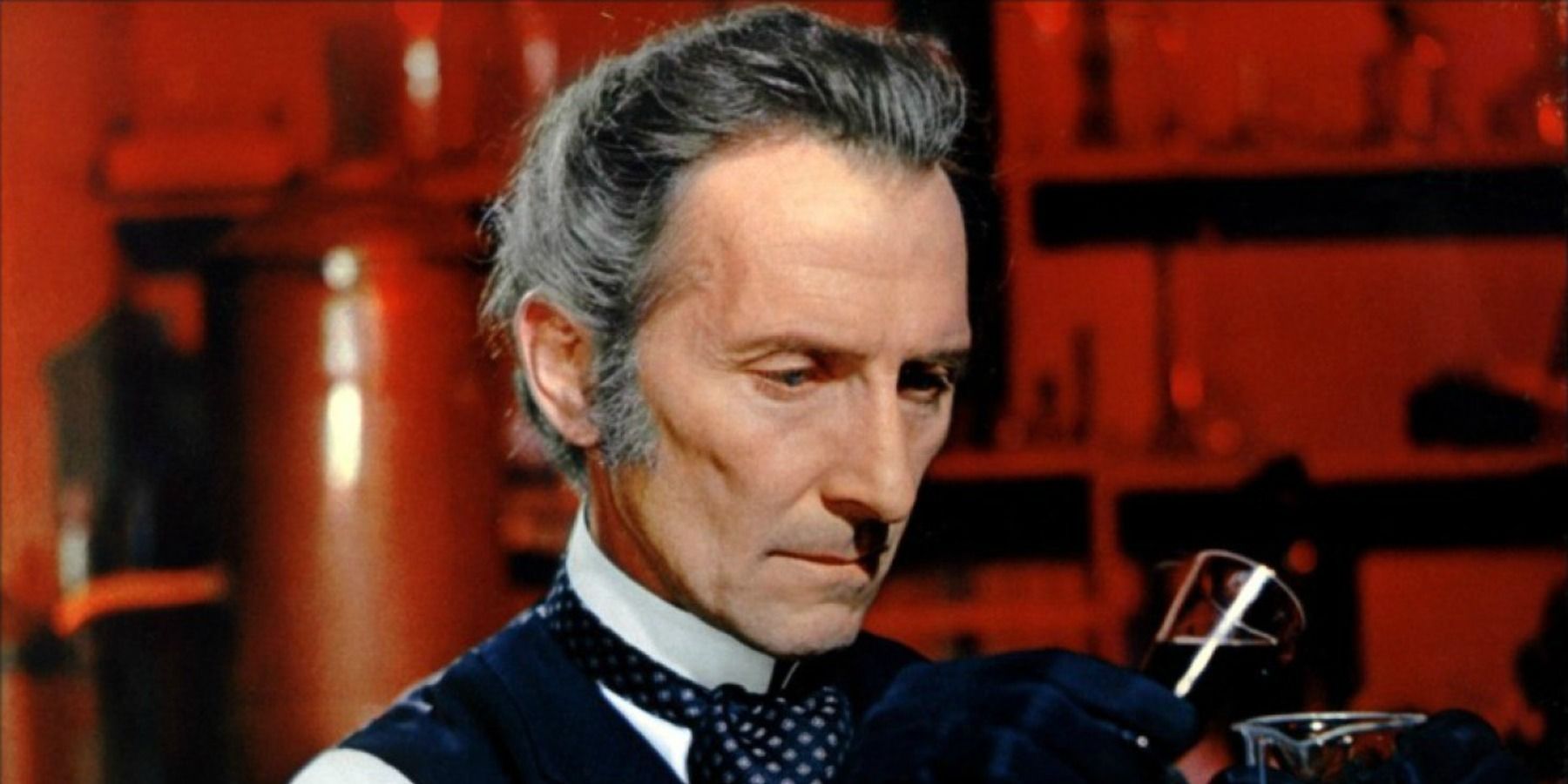 There’s a curious footnote in Cushing’s career, however, that deserves a quick look by any science fiction fan. Doctor Who is an iconic sci-fi TV show that first appeared on the BBC in 1963 and has run more or less continuously to the present day. Thirteen actors have played the title role, plus a few others who seem to exist “outside” the timeline.

But what everyone forgets is that Peter Cushing played the character way back in 1965, in a pair of full-color movies made for a wider audience.

It’s true. The TV show Doctor Who was gaining speed in Britain and its most infamous villains, the Daleks, were already a phenomenon. Playing off this popularity, the Daleks got their own movie where they once again battle the Doctor – but there was a hitch. None of the copyrighted things in the TV show could be reproduced directly (beyond the Daleks) so the hero became known as Dr. Who and his time travelling spaceship was simply named “Tardis” (as opposed to being an acronym TARDIS).

Back when nobody cared about continuity

William Hartnell was still playing The Doctor in the ongoing TV series, but Peter Cushing accepted the role for the film and made it his own. Cushing’s performance is interesting because he makes The Doctor a genuinely heroic character, rather than the mysterious and sometimes self-serving protagonist of Hartnell.

It can be argued that Cushing actually paved the way for the future of the franchise, because up until then only Hartnell had played The Doctor – he was the character. With Cushing showing that another actor could play the role effectively, it may have opened the door to bringing in Patrick Troughton when William Hartnell stepped down. The Doctor became timeless, and multi-faced, and became the legendary sci-fi figure we know today.

I doubt Peter Cushing will ever be listed among the actors who played Doctor Who – because technically he was Dr. Who and his movies aren’t canon – but there is perhaps only one sci-fi franchise more willing to retcon than Star Wars, and it’s based around a time-travelling madman in a box.

When George Lucas was building his little space movie, he recognized a potential problem. The film’s primary antagonist wore a black mask that hid all expression: Lucas decided that he needed a strong human villain character to offset the mysterious Darth Vader – a powerful counterpoint who wouldn’t upstage Vader but at the same time wouldn’t be overshadowed by him. This led Lucas to search for a well-known veteran with strong screen presence, and eventually the film director approached Cushing for the role of Grand Moff Tarkin. Although not a particular fan of science fiction, Cushing joined the project. With Cushing aboard, Lucas was able to gain more attention for the movie.

Ruling the galaxy in comfy shoes

But when filming began, Peter Cushing discovered that the boots he was required to wear in costume were very uncomfortable, to the point where it was affecting his performance. The solution was absurd, but simple: Cushing wore comfy slippers on the set. The actor purposely stood where his feet were hidden, and he and Carrie Fisher filmed their scenes from the waist up. So all those sinister orders he gives from the Death Star control room, his villainous interrogation of Princess Leia Organa, his order to destroy Alderaan… all done in slippers. 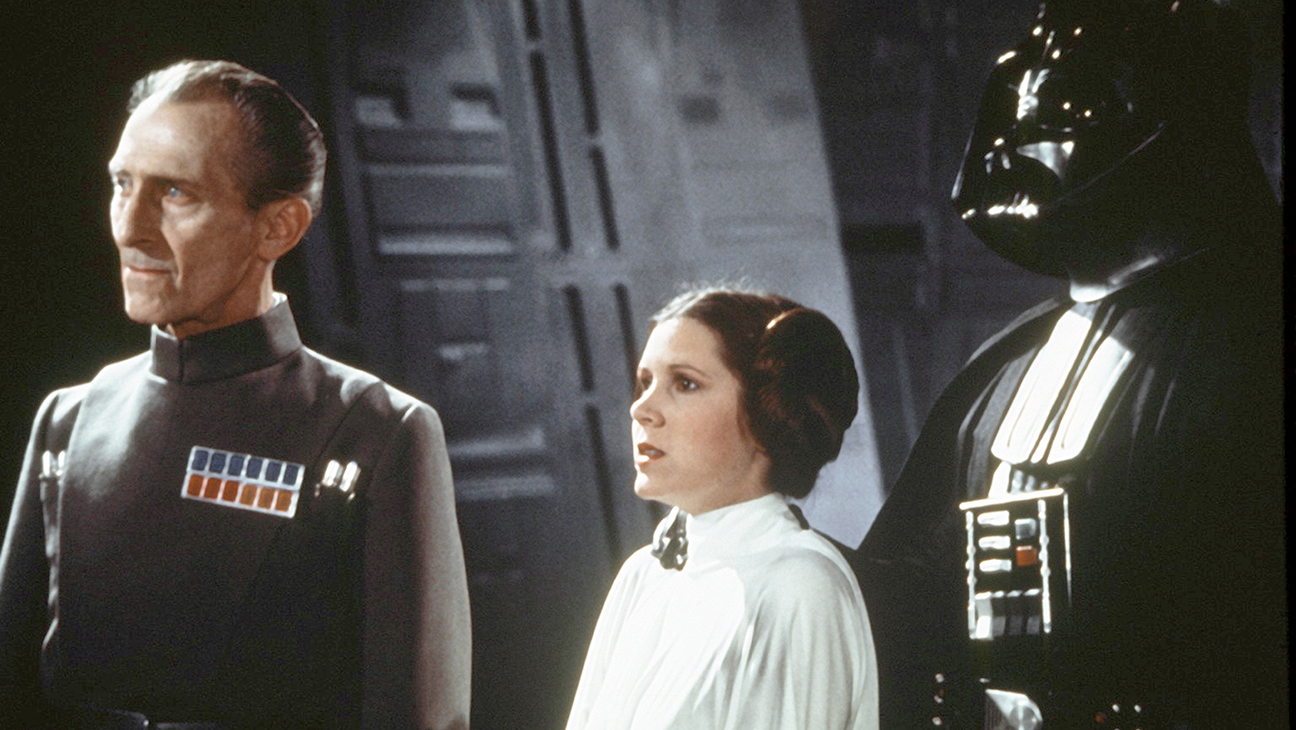 A quote for every occasion

As a side note, a few years ago our beloved family cat, Ashes, was getting old and sick, and we had to make the difficult decision to have her put down. But one does not simply walk into the vet’s office with cat in hand… I had to go down a few days early and book the final appointment. It was a heart-wrenching thing to do, and when I got home I realized that I could say in earnest the same words uttered by Governor Tarkin to Princess Leia:

“You don’t know how hard I found it, signing the order to terminate your life.”

Truly, a Star Wars quote for every occasion.

Back to that movie we’re talking about, just as he’d done as Baron Victor Frankenstein, Peter Cushing had to compete with the imposing physical presence of David Prowse, who played Darth Vader. It’s actually a fair argument about who is really the primary antagonist in Episode IV – Darth Vader is big and scary, he chokes people and he kills Ben Kenobi, true. But Grand Moff Tarkin freakin’ blows up Alderaan! The fact that he gets blown up himself at the end of the movie is sweet, poetic justice. 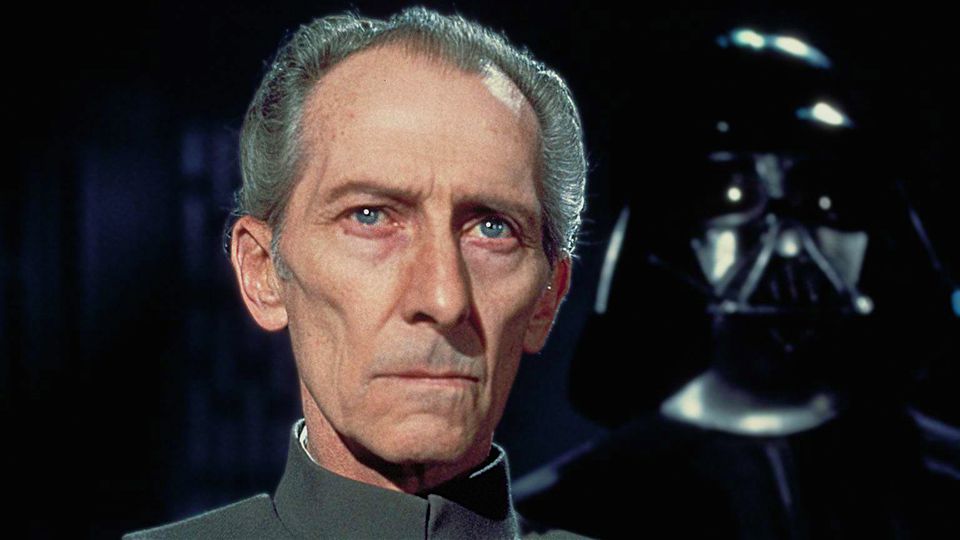 And dramatically, Cushing smoked it. He dominated every single scene he’s in. Throughout the entire film it’s interesting to note that Vader defers to Tarkin. Vader might be able to choke out a mouthy senior officer from a distance, but it’s Tarkin who calls off the big guy, Tarkin who breaks Leia, and Tarkin who makes the major decisions.

Although he appeared in Star Wars for less than 9 minutes, Cushing’s portrayal of Grand Moff Tarkin was so powerful that he became an instant star. British audiences already recognized him, of course, but now North American and worldwide audiences came to know him. And after a long film career and best-known as a horror actor, he is now forever remembered as a science fiction icon. Grand Moff Tarkin joins Doctor Van Helsing, Victor Frankenstein, Sherlock Holmes and Winston Smith as Cushing’s most famous roles.

Peter Cushing was very pleased with the final version of Star Wars, and said that his only regret was that Tarkin was killed and therefore couldn’t appear in any subsequent films. (Wait for it…)

Peter Cushing in Rogue One: A Star Wars Story

Cushing appeared in over a hundred roles over his long career, and his final film was Biggles: Adventures in Time (I’m not making that up) in 1986. Cushing’s death in 1994 was widely mourned by fans and his fellow cast members and praises for his long career poured in. At the time Star Wars was mostly considered complete with the three movies, and no-one ever expected to see Grand Moff Tarkin in live-action again.

But we live in the future nowadays. When, in 2015, the first ever non-Skywalker Star Wars movie was released, fans were astonished and (mostly) delighted to see their favorite Imperial officer once again grace the screen.

Rogue One is the best Star Wars movie ever (yes it is, I will fight you) and it consistently delivered a potent mix of new adventure and nostalgia: it had lots to enjoy for all fans who love Star Wars. But the biggest surprise of all was the return of Grand Moff Tarkin as a major supporting character. True, it wasn’t the actual actor Peter Cushing playing him, but the CGI-likeness overlaid on actor Guy Henry was remarkable.

It wasn’t the first film in the franchise where CGI characters featured (no gungans will be mentioned by name in this article) but it was the first time a previously-established actor was re-created. And unlike Attack of the Clones (which is the worst film of the lot) the CGI was designed to be as invisible as possible – a tool to support the narrative rather than the main focus of the scene itself.

Nothing could replace the sheer on-screen presence of Peter Cushing, but the fact that Lucasfilm went to all the effort to recreate Grand Moff Tarkin in CGI speaks volumes to the popularity of the character.

The enduring appeal of Peter Cushing

Fans were awed by the evil genius of Governor Tarkin, but looking back over Peter Cushing’s long and distinguished career, we shouldn’t be surprised at how well he brought his character to life. Like Alec Guinness as Ben Kenobi, Cushing brought a gravitas to his role that anchored the entire film, creating a true sense of menace in a story that could easily have descended into cartoon buffoonery. Kenobi was the archetype of nobility, perfectly countered by Tarkin as the archetype of bureaucratic evil.

Tarkin has continued to be an important character in the animated series Clone Wars and Rebels, a fan favorite who commands every scene he’s in and always seems one step ahead of his opponents. He’s hardly a complex villain like Asajj Ventress or Kylo Ren, but rather he represents the purest evil that was so much a part of the original spirit of Star Wars. One dimensional characters are often forgettable, but when they’re brought to life with the power of an actor like Peter Cushing, they become iconic.