The Shakespearean Tragedy of Savage Opress

By Bennett ColesPublished On: May 6, 2021Categories: Star Wars Characters0 Comments

Star Wars has a bazillion characters. Most of these characters are pretty one-dimensional, but every now and then we see a character who is truly complex. And if we’re lucky that character even gets an awesome storyline.

Star Wars: The Clone Wars was good at building depth out of paperweight elements from the movies, but every now and then the show created something completely original. I’m actually not talking about Ahsoka Tano here (for once) – I’m talking about one of the biggest, best baddies in all of Star Wars: Savage Opress.

A Story Worthy of the Bard Himself

Who? If you’re not a fan of the animated show, you’ve likely never heard of Savage (pronounced sav-AHJ, with the accent on the second syllable). If ever you needed a reason to watch Star Wars: The Clone Wars, may I propose that this is it.

The name “Savage” was originally ironic

Savage is a strong, kind-hearted man living on Dathomir. Former Sith apprentice, assassin, Nightsister and all-round badass Asajj Ventress arrives in his village, claiming her right to take the strongest male as her mate. Savage, his brother Feral and the other young men compete in a competition that ends with only the two brothers still alive, and Feral alive only because Savage protected him.

Ventress takes Savage back to the Night Sisters, her cabal of powerful Force-wielders, to transform him to their foul purposes.

Why was Savage Opress so powerful?

Savage was a big, strong lad to begin with, but the Nightsisters use a ritual to imbue him with the Force and transform him into a hulking brute worthy of his name. Their leader, Mother Talzin, offers Savage to Sith Lord Count Dooku as a new apprentice. But in fact Savage is meant to be their instrument of revenge against Dooku for his abandonment of Ventress. 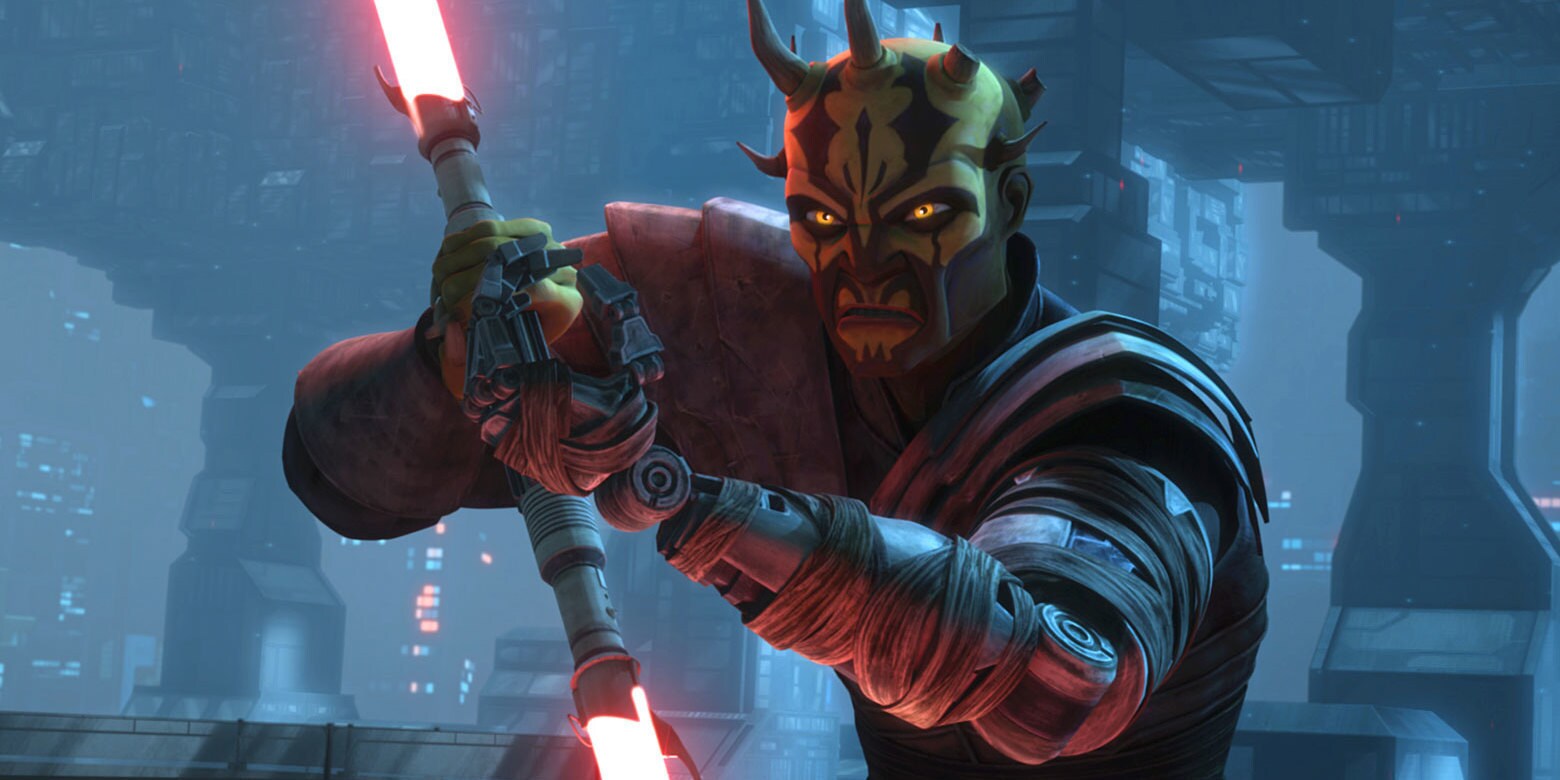 So right away, we can see how Savage Opress is a tragic figure – a good man torn away from his home and twisted into something evil. Lured by the dark power rushing through his veins, he murders his own brother and then sets out on a path of deception.

No honor among Sith lords

Savage Opress serves Count Dooku with brutal efficiency, earning the attention of the Jedi with his devastating dual lightsaber attacks. At times his warrior ways become too much even for Dooku, such as when Opress kills the king of Toydaria when his order was to capture him. Dooku sees potential in him, though, training him using brutal Sith techniques like Force lightning.

Soon enough Asajj Ventress steals aboard Dooku’s ship and orders Savage to help her take revenge on her former master. But Savage rebels, refusing to be anyone’s pawn, resulting in a dramatic twist where Count Dooku escapes, Ventress flees, and Savage Opress returns to Dathomir.

Savage Opress, savage now in both name and deed, returns to the Nightsister cabal seeking wisdom from Mother Talzin, who he still believes has his best interests at heart. She gives him the quest to find his long lost brother Darth Maul.

Savage has a brother?

Wait – what? Darth Maul? We all saw his death way back in Phantom Menace! Well, okay, we saw him sliced in half and falling down some bottomless shaft on Naboo.

(If he used the Force to survive that, don’t ever tell me Mace Windu wasn’t able to survive his fall from the chambers of Darth Sidious.)

The image of evil incarnate returns

Okay, so… awesome. Darth Maul is still alive, and Savage Opress finds him, insane and riding a crazy, mechanical spider body for legs. Opress brings his lost brother back to Mother Talzin, who restores him to sanity (or at least, what passes for sanity with Maul) and gives him wicked new legs.

If you’re from the generation who grew up on Star Wars: The Clone Wars and didn’t see Phantom Menace until later, you might think Maul is just new content brought in to support the Opress storyline.

Oh no. Maul was, up until Savage brought him back, the single greatest waste of an awesome character in all of Star Wars. With the possible exception of Porkins, no character was so underused despite having so much potential.

Are Opress and Maul actually related?

We don’t know enough about Savage’s and Maul’s bloodlines to know if they’re actually brothers, but as they set forth from Dathomir they certainly act like it. 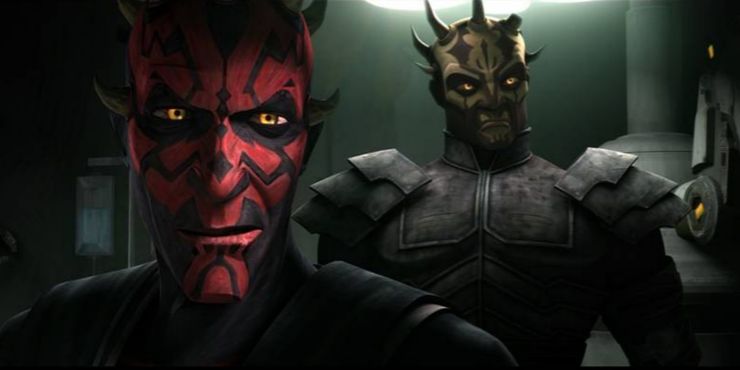 One of the Best Plotlines in Star Wars: The Clone Wars

Maul, his mind restored, wants revenge against those who wronged him, starting with Jedi Master Obi Wan Kenobi. By brutally attacking a remote colony the brothers ensure that word gets to Kenobi, drawing him to respond.

Credit to Obi Wan, he accepts the news of Maul’s non-death with surprising serenity. Remember, this was the dude who killed Kenobi’s master, Qui Gon Jinn, leaving Kenobi to apprentice Anakin Skywalker when he’d barely become a Jedi knight himself. He knows it’s a trap, but the arrogance we see all too often in late-Republic Jedi shines through and he walks right into it.

It should be no surprise that Maul and his brother Savage best Kenobi and capture him, but surprise does arrive in the sudden return of Asajj Ventress. The assassin is now working as a bounty hunter and wants to collect Savage’s head and the related reward, plus a smattering of vengeance.

But it ended well

So not only does Kenobi find himself facing off against an enemy long-thought dead, plus that enemy’s monstrous brother, he discovers an ally in his more recent arch-nemesis. Obi Wan and Ventress fight their way free in a fabulous, four-way lightsaber duel.

(And there’s probably some fan fiction out there exploring whether the Jedi and former Sith finally make good on their constant innuendo.)

Now on the dark path, can things end well for Savage?

Opress and Maul return to The Clone Wars at the start of Season Five, in one of the single best moments of the series. These guys prove that they are badass and they mean business. Their relationship also changes from that of brothers to that of master and apprentice, as Maul asserts his dominance over Savage in the time-honored image of a Sith Lord. Related or not, long lost brother or not, Maul’s lust for power drives him to control everything around him.

Savage seems content to accept this new relationship, submitting to his master’s training. Here we see the continuing tragedy unfold. Originally a good man twisted by the Dark Side, Savage isn’t able to find the brutal strength required to resist. He’s used by Maul, just as Dooku, Ventress and Mother Talzin used him. We might wish that Opress would find the strength to break away, to use his new powers and stand up for himself like he once did for his brother Feral, but it seems his part in this play is pre-ordained.

So Savage follows his master, his brother, Darth Maul, as they gather resources and try to recruit soldiers. But they encounter the Jedi again, barely escaping Hondo Ohnaka’s base with their lives. They need greater strength of numbers, and the Dark Side provides.

Adrift in space, Maul and Opress are found by members of Death Watch, a terrorist group seeking to liberate Mandalore. Maul convinces the leader of Death Watch, Pre Vizsla, to join him and through a combination of strength and persuasion Maul brings together most of the criminal community in the sector.

Maul’s strategy works, sending criminal elements to disrupt the planet Mandalore and allowing Death Watch to swoop in like heroes. Maul sets up a puppet ruler and bides his time, waiting for Obi Wan Kenobi to attempt a rescue of his beloved Duchess Satine.

While he waits for his Jedi nemesis, he challenges Pre Vizsla to single combat in order to eliminate a rival and get his hands on the dark saber, a unique, Mandalorian lightsaber. By the warrior code, when Maul defeats Vizsla he becomes the ruler of the planet.

Savage watches his brother’s sinister plan unfold. Kenobi arrives in time to see Maul murder Duchess Satine, burning another image of loss into the Jedi’s mind. Kenobi is imprisoned, but is rescued by breakaway members of Death Watch and members of the wider community.

All the politics quickly take a backseat for Maul and Opress, however, as Maul’s former master suddenly arrives on Mandalore. In one of the most powerful scenes in The Clone Wars, Darth Sidious squares off against both Maul and Savage. The image of three Sith warriors battling to the death is thrilling to watch, but of course we know how it has to end.

Savage Opress is slain by Darth Sidious, his body fading as all the dark magic from Mother Talzin flows out of him. Maul is spared, and will go on to more drama in Star Wars: Rebels, but it is here, on Mandalore, that Savage’s tragic tale ends.

The Tragedy of Savage Opress

Used by every person who was supposed to protect him, Savage was a good man destroyed by power, revenge and the Dark Side. We’d have to search hard to find another Star Wars character who so perfectly captures the image of fallen potential, the image of what might have been.