The Trandoshan: A Less Savory Part of Star Wars

By Bennett ColesPublished On: May 1, 2022Categories: Star Wars races0 Comments

One of the best parts of Star Wars for me, when I was a kid and watching the Original Trilogy, was the menagerie of weird and wonderful creatures that Lucasfilm paraded across the screen. Most of the aliens got nothing more than non-speaking cameos and were just there as part of the background fun to flesh out the galaxy. But over the decades, as Star Wars has expanded into 12 movies (and counting) plus multiple TV shows, novels, comics and even video games, there’s been a lot of room to explore many alien races. Some of them, like the Twi’leks, have emerged as fascinating, complex societies with characters essential to the Star Wars story. But others have remained pretty much the monsters we thought they were upon first viewing.

Take, for example, the Trandoshans.

What is a Trandoshan?

We met our first Trandoshan in The Empire Strikes Back, when the bounty hunter Bossk growled menacingly at some Imperial officers. Bossk was a typical example of his species, with scaly skin, sharp teeth and an overall reptilian look, but the Trandoshan species can vary wildly in appearance. They can have green, brown, orange, red or even yellow skin, with hands sporting either three thick digits or four thin digits plus a thumb. They can be short or tall, rather rotund or fairly gaunt. Some even sport crests of feathers on their heads. They often go barefoot, making good use of the claws on their hands and feet to scale trees or other obstacles. 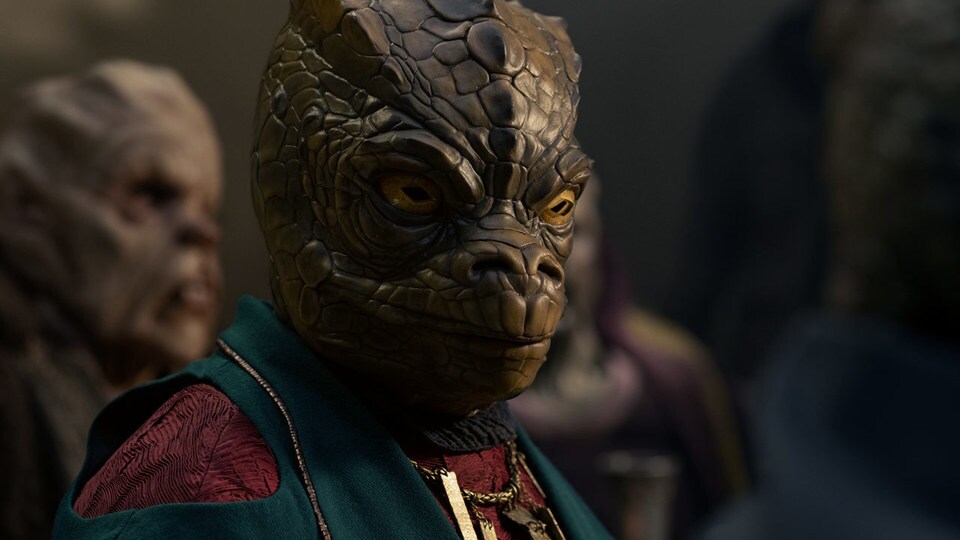 One of the most remarkable Trandoshan physical qualities, however, is the ability to regenerate lost limbs. Many warriors have displayed trophies of long, thin arms severed from Trandoshans, but if their opponent escaped that arm would soon enough have a replacement. If a Trandoshan could find a safe place to heal effectively from such a loss, they could regenerate limbs with remarkable speed.

Trandoshans are also sometimes called T’doshok. They come from the planet Trandosha and were active members of both the Republic and the Galactic Empire.

Are Trandoshans important to Star Wars?

Neat enough, you might say, but does this make Trandoshans important to Star Wars? On its own, no, but Trandoshan characters have played significant roles across many years of the saga. Not all of them are bad as individuals, but to date the Trandoshans we’ve met haven’t given us an overly positive opinion of the species.

Some of the most feared bounty hunters in the galaxy

Above all, the image of the Trandoshan hunter dominates their galactic reputation. With their fearsome appearance and guttural, hissing language, many Trandoshans are given a wide berth by other sentient beings. Many Trandoshans relished being bounty hunters or warriors, but others could be found in numerous jobs in various organizations – that said, their role in Star Wars usually stayed close to their traditional image of great hunters.

The first Trandoshan introduced to canon was, of course, Bossk, who took Darth Vader’s bounty on Han Solo. He was beaten to the mark by Boba Fett and only had several seconds of screen time, but that bit of growling was enough to capture the imagination of fans.

Bossk reappeared in The Clone Wars, acting as a bodyguard and teammate to an adolescent Boba Fett across multiple episodes. In Clone Wars we get a better look at Bossk in his prime as a feared bounty hunter and all-round ruthless character. He’s held in check by Aurra Sing and left in the dust by Asajj Ventress, but we learn enough to realize that he’s a strong, self-serving survivor.

The deepest insights we have into Trandoshan culture comes from another Clone Wars story, where Trandoshan scouts abducted Ahsoka Tano and took her to the moon Wasskah, which had been set up as a series of hunting island game preserves. Garnac was the leader of a group of Trandoshan hunters who stalked the prisoners dropped on the island designated to their tribe.

Ahsoka discovered other Jedi Padawans on the island, who had been surviving by staying hidden for many months, and very quickly they all came under attack by a hunting party of five Trandoshans. Garnac’s son, Dar, is put to the front and offered the first kill as part of a hunting-related rite of passage, but Ahsoka kills Dar in self-defense. Enraged, Garnac gave chase but Ahsoka and the remaining younglings managed to escape.

The unhinged rage we see in Garnac is matched only by his bloodlust, and while he could easily have satisfied himself with other prey, his hunt for Ahsoka suddenly becomes personal. He’s an excellent villain who brings a real sense of danger to our young hero – and solidifies our image of Trandoshans as savage brutes.

Ahsoka creates a plan to destroy the next ship to arrive at the game preserve, and from the wreckage emerged a Wookie prisoner named Chewbacca. Chewie is able to construct a radio from the downed ship and call for help. Garnac fights to the last, but the Trandoshan hunter is eventually killed and his grisly killing ground shut down.

Bossk and Garnac are the most prominent members of their species in Star Wars canon, but the roles of Trandoshans ranged widely enough that we can build a slightly more nuanced image of the species.

Introduced in The Bad Batch, Cid is a Trandoshan barkeep and businesswoman on the planet Ord Mantell. She’s not a savage killer or calculating bounty hunter, but she’s also not a particularly nice person. Struggling to survive against the various waves of crime lords for years, she cut deals and pulled jobs that made sense for her survival. Having now encountered the noble Bad Batch and idealistic Omega she’s displayed an occasional moment of kindness, but I won’t be surprised if we later learn that she eventually acted in her own self-interest to the detriment of our heroes. 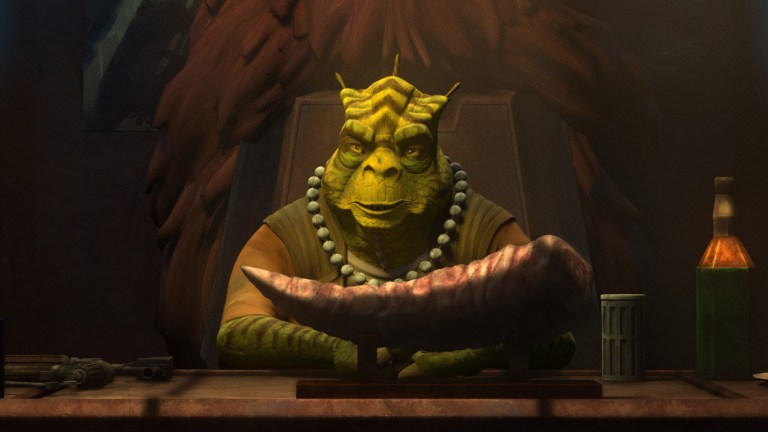 Cid’s a fun character and a welcome shade of grey in the increasingly complex Star Wars universe, but she still isn’t making Trandoshans look especially nice.

One exception to the common image of brutal killers and shady criminals is Jedi Master Sskeer, who dates from the High Republic, centuries before the rise of the Empire, and who was well respected as a tactician and scholar. He fought against the Nihil and gives us hope that within every species there are good and noble individuals.

One of the most interesting and disturbing inter-species dynamics in Star Wars is the ongoing animosity between Trandoshans and Wookies. Official lore says how Trandosha is in the same star system as the Wookie homeworld Kashyyyk, raising the potential for tension between the two races. This tension is amplified by the fact that Trandoshans worship a god called Scorekeeper, who grants divine points for every act of bravery and cunning a Trandoshan undertakes. With Wookies being so skilled, intelligent and powerful, they naturally bring a huge number of points on Scorekeeper’s ledger and over the centuries have become a favorite target of Trandoshans seeking glory. 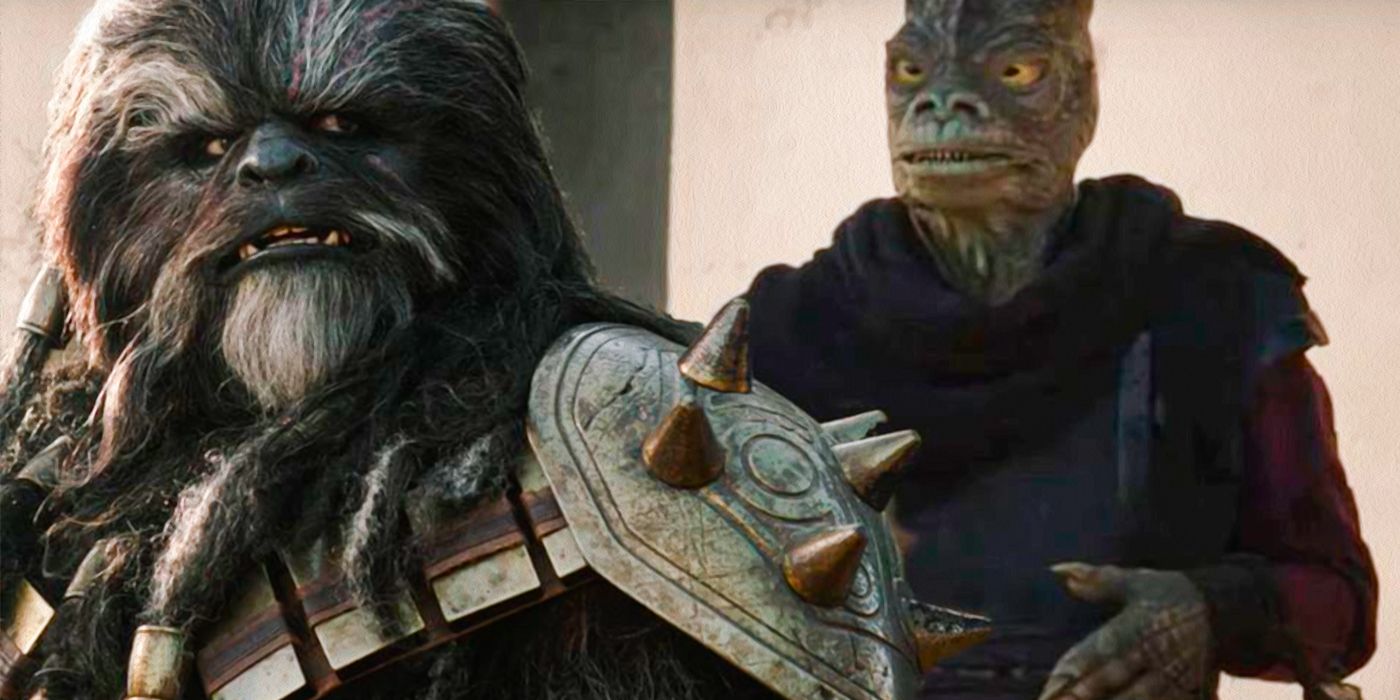 This idea was explored in great detail in the Expanded Universe, particularly through Black Krrsantan, a very dangerous Wookie who sometimes travelled with Doctor Aphra. Wookies were captured as slaves and as hunting targets, causing endless cycles of rescue and retribution between the two powerful species. All of these stories are no longer canon but, like so much of what is now Legends, their influence is seeping into the new, Disney-controlled canon.

Black Krrsantan has re-entered canon through The Book of Boba Fett as a terrifying Wookie warrior hired initially to kill Boba Fett himself. He very nearly succeeds and is thwarted only by the combined efforts of Fett, Fennec Shand, their Gomorrian guards and their Mod allies. Black Krrsantan is then gifted to Boba Fett by the Hutts who hired the Wookie, but Boba Fett sets him free with the comment, “Nothing personal.”

But we soon catch up with Black Krrsantan in the local bar, where he decides to pick a fight with a group of Trandoshans. The confrontation eventually ends with Black Krrsantan tearing the Trandoshan’s arm clear out of his socket before daring any of the others to retaliate. Without context many viewers would assume this was simply a brutal attack by a dangerous Wookie warrior, but once we realize the centuries of animosity between Wookies and Trandoshans, Black Krrsantan’s actions becomes, if not exactly justifiable, then at least understandable.

The Book of Boba Fett pays tribute to this age-old struggle in another scene, where a local Trandoshan crime boss offers Boba Fett tribute in the form of a Wookie pelt – no doubt one of the most valuable prizes in his possession.

It’s fun to subvert stereotypes, and Star Wars has done a good job over the past decade of re-examining previously one-dimensional species like the Tusken Raiders and even the Rancor. But it seems that the Trandoshans are going to remain on the “evil” side of the ledger for a while longer. And that’s okay, because ultimately Star Wars is a story meant to entertain – and in order to have good drama we need good villains.

Oh sure, maybe there are other Trandoshan scouts combing the galaxy to find eco-friendly power sources and new philosophies for just government. And maybe there are Trandoshan scholars helping to set up the New Republic according to the best and most practical ideals from a thousand worlds. But we’re probably not going to see them – we’re going to see the Trandoshans who hunt, who scheme and who cause trouble for our heroes.