By Bennett ColesPublished On: May 2, 2021Categories: Star Wars races0 Comments

Star Wars has created many alien species and one of the most common is the twi’lek. They’re the ones with two big appendages (called lekku) hanging off their heads. And you might also think to yourself, oh yeah, they’re the aliens who like to show skin.

But there’s a lot more to twi’leks than exotic dancing.

Twi’leks are originally introduced to Star Wars in Return of the Jedi when we meet two of them in Jabba’s palace. The first is Bib Fortuna, the slimy majordomo, and the second is Oola, the exotic slave who dances for Jabba and then, when she resists his advances, gets fed to the rancor.

As it does so often, Star Wars: The Clone Wars takes a minor tidbit from the movies and runs with it, creating a whole galactic backstory. This is often really cool, but with twi’leks it has a nasty twist: Oola’s a dancing slave, so obviously there must be twi’lek exotic dancers everywhere.

It frustrated me a bit, as I watched Clone Wars, that every criminal kingpin had twi’lek women hanging off him and every seedy bar had female twi’lek dancers. It was like the only purpose this race served was to provide racy content.

Don’t get me wrong – it’s good to see Star Wars pushing the boundaries of PG on occasion, and I get that kingpins and seedy bars need their eye candy. My point is, why are they always twi’leks? The togruta are a gorgeous species, and many a mirialan scrubs up nicely. And if we’ve seen Return of the Jedi we know that human females can rock a bikini.

So why is it always a twi’lek wrapping the pole?

Why are Twi’leks slaves?

Well, according to information scattered across many a Star Wars site, it seems that twi’lek women are coveted around the galaxy for their beauty. With so many unsavory characters running amok, and slavery a real thing in the galactic community, many twi’lek women are sold into slavery specifically because they’re seen as status symbols for crime lords and exotic bars.

Even a sexy Jedi

Twi’lek can be other things than dancers, and in Aayla Secura we meet our first “empowered” twi’lek:  a Jedi knight, no less. But even here, we still see oversexualization. Aayla Secura fights the war in basically a leather bikini while other female Jedi – like Luminara Unduli, Barriss Offee and Shaak Ti – are bundled up like handmaidens. 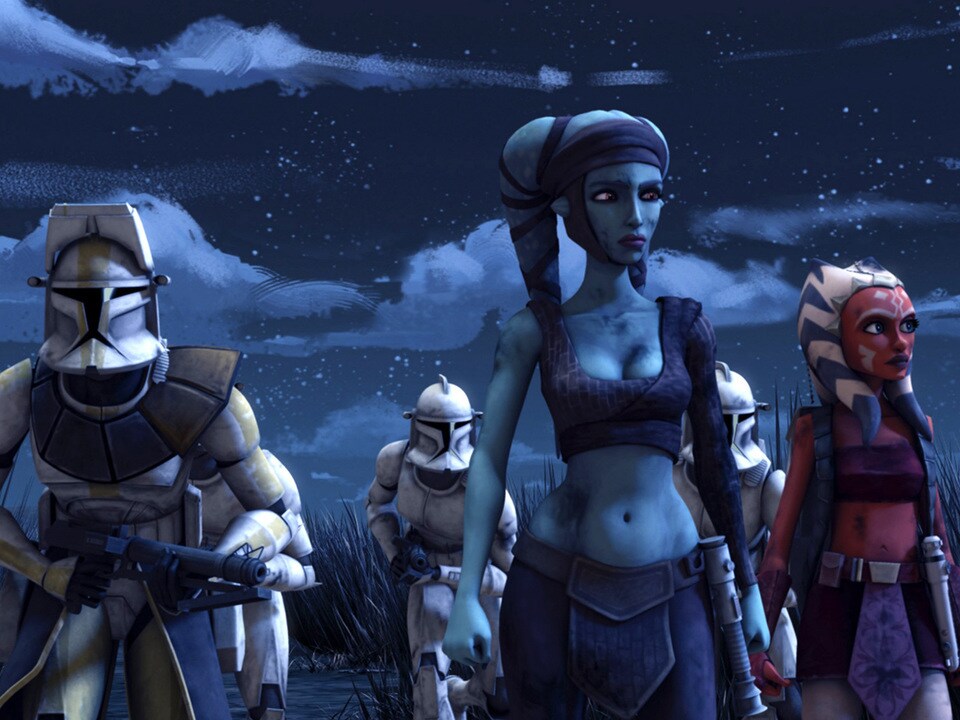 Look, I’m totally into a strong, confident woman dressing how she wants – and knowing that Aayla’s master was the bicep-flexing Quinlan Vos can account for her fashion choices – but why did it have to be the twi’lek dressed as a Bond girl? Show me Barriss and Shaak Ti in leather bikinis and I’ll let this go.

Why are twi’leks different colors?

At least twi’leks avoided another common science fiction stereotype, where every alien looks the same. Twi’leks appear many times in both Star Wars animated TV shows, and we see a huge variety of skin tone, head shape, lekku style and body type. They’re a very diverse species, and the more views we get of them the more we break away from the image of the exotic dancer.

Why do female twi’leks not have ears?

An interesting biological fact about twi’leks is the difference between male and female ears. The men have pointed ears not dissimilar to humans but the women have cone-shaped, fleshy nubs that they usually keep covered. This may be merely a result of Star Wars costume design for Return of the Jedi (I don’t know if Bib Fortuna and Oola were actually considered as the same species back in 1983) but hey, let’s run with it.

What’s up with the lekku?

One of the most obvious things about a twi’lek is their lekku. What’s extra cool is that twi’leks can communicate through them, the movement of the lekku tips a kind of sign language that other twi’leks can read. Twi’leks use their lekku to augment their words and bring a greater richness to their communication.

The twi’lek homeworld is Ryloth, a planet of harsh appearance and rich history. It features several times in Star Wars TV episodes. In the clone war the Separatists invade Ryloth in order to use it as a strategic site to push into Republic space, but they’re quickly set upon by twi’lek rebels determined to free their world.

The resistance is led by Cham Syndullah, one of the first canon twi’lek we meet not involved in crime. Leader of a group of rebels, Cham joins forces with the Republic to bring the Separatist invaders to account. The two forces mostly get along, and the combat experience they share does work to breathe life into Ryloth’s commitment to the Republic, even if Cham himself remains skeptical. Years later, Cham reappears in Star Wars: Rebels when his daughter Hera rises to prominence.

What are twi’leks doing behind the scenes in the galaxy?

We don’t follow many twi’leks during the clone war years, but if we search there are a few notables to be found. Ambassador Orn Free Taa is hard at work for Ryloth in the Republic Senate. His personal character may be questionable and the image he portrays may not always be a sign of his people’s noble history, but he does stand up for his homeworld.

We get a new appreciation for Jedi knight Aayla Secura as she lends her wisdom and experience to Ahsoka Tano. Together they search for help as Ahsoka’s human master, Anakin, lies gravely wounded at a crash site. This is Aayla’s only major canon appearance but it’s a strong sign that twi’lek heroes can give a good account of themselves.

Star Wars: Rebels finally did twi’leks justice in Hera Syndullah. An expert pilot, fearless warrior and wise leader, Hera is the whole package. She convinces a rag-tag group of miscreants to follow her into war and she leads the way in building the Rebel Alliance. 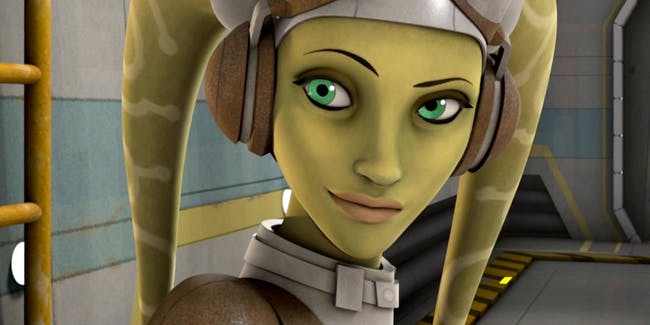 What I like most about her portrayal is that she is never oversexualized. She’s in a committed relationship with Kanan, she dresses practically, and others follow her strength of character, not her big, green eyes (which are gorgeous, by the way). She even knows how to say “please” – a sure sign of self-confidence mixed with basic courtesy.

Hera isn’t perfect. She carries her own insecurities and resentments that bubble up in her strained relationship with her father, Cham. She holds prejudices, like against the peaceful purrgil, and she can definitely be stubborn. But these imperfections only make her a stronger character, and Star Wars would be well-served to have more like her.