How the Tusken Raider was Reinvented, Thanks to Boba Fett

The Star Wars franchise has no shortage of aliens, but many fans have a special place in their hearts for the alien species we met way back in the original movie. Wookies, jawas and the dianoga bring many a smile. But one alien species from Star Wars: A New Hope never enjoyed such a friendly greeting.

The Tusken Raiders, or Sand People, were desert bogeymen who savagely attacked Luke Skywalker in the Jundland Wastes, and then were fooled into fleeing by Obi-Wan Kenobi. Barbaric, stupid and dangerous, the Tuskens were nothing but bad news. We knew they rode banthas (in single file, to hide their numbers) would raid the local settlers and apparently were worse shots than Imperial stormtroopers. They had flowing robes and kept their heads wrapped in mysterious masks.

Beyond that, they weren’t mentioned again in the Original Trilogy.

Where did the iconic Tusken voice come from?

Although their screen time is short, the Tusken Raiders made a huge impact on audiences, in no small part because of their unique cry. Sound designer Ben Burtt was inspired by the braying of donkeys and he manipulated some recordings of a bunch of asses to create the unique and eerie cry of the Sand People.

The Prequel Tuskens: not much better

The Tusken Raiders featured briefly in Phantom Menace, taking pot-shots at pod-racers during the Boonta Eve Classic. But their most significant contribution to the Prequel Trilogy was when Anakin Skywalker returned to the desert world Tatooine in search of his mother – only to learn that she’d been kidnapped by the Tusken Raiders. His discovery of her in a Tusken camp, bound and beaten after what looked like ritual torture, only made us hate the Sand People more. It doubled down on the original image of them as savage beasts, and none of us were really that shocked when Anakin starting killing the entire Tusken tribe. 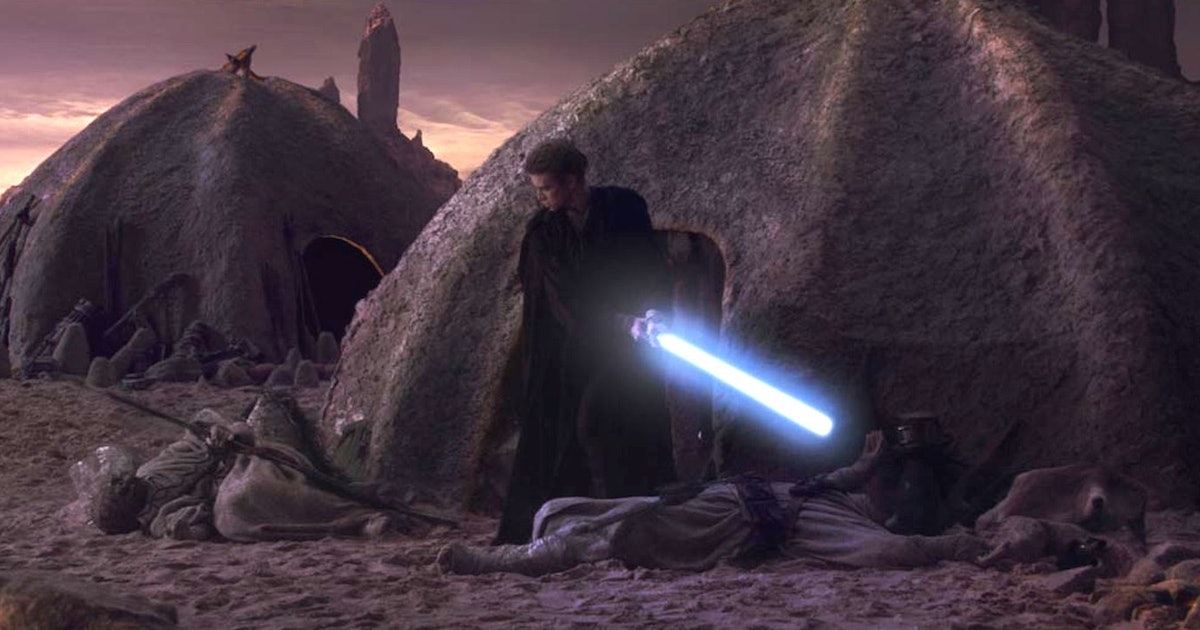 This moment is significant to the descent of Anakin Skywalker toward the Dark Side and his eventual transformation into Sith lord Darth Vader, as he surrendered to his rage after being unable to let go of his attachments. We don’t see the full fury of his slaughter, but his later, on-screen rant to Padme about what he did fills in the blanks pretty clearly.

This might have been a more powerful sequence if we’d actually witnessed Anakin hacking down Tusken children, but it seemed like Lucasfilm was content to leave the Tusken Raiders as nothing more than the bogeymen they’d always been – a mindless, roving threat on the Dune Sea.

The many, many books and comics written after Return of the Jedi sometimes explored the Tusken Raiders, and there are even a few images of what they look like under their masks. Of course, none of this is canon anymore, so while it’s fun to check out what certain authors and artists thought of the Tuskens (often with at least tacit approval from George Lucas and Lucasfilm) none of it can be considered real in today’s Disney-controlled Star Wars.

The Tusken who became a Jedi (and a Sith)

One of the most interesting (and totally not canon) stories from Legends is that of Darth Krayt, a human who was raised by the Tusken Raiders and who became a tribal leader. This story was the first major attempt to explore Tusken culture, and Darth Krayt is one of the coolest characters to come out of that period of Star Wars history – but again, it was decreed by the new Lucasfilm to be no longer canon, so we can’t put too much weight on it.

A new look for the Tuskens, through the eyes of the Mandalorian

But then, in one of the most remarkable episodes in Star Wars, we finally got another look at the Sand People. The Mandalorian is set in the years following the Galactic Civil War, and Mando’s many travels have obviously brought him to Tatooine before and he even knows how to speak to the Tusken Raiders in their own sign language (bravo, Lucasfilm!).

With a reluctant Cobb Vanth in tow, Mando strikes a deal with the Tusken Raiders to help slay a krayt dragon in order to bring peace to the region. In the episode we finally glimpse the Tusken culture, see them as a people with history, with family, and even with fear. The battle with the krayt dragon is epic, but it does much more than give us a fun story – it humanizes, for the first time ever, the Tusken Raiders. 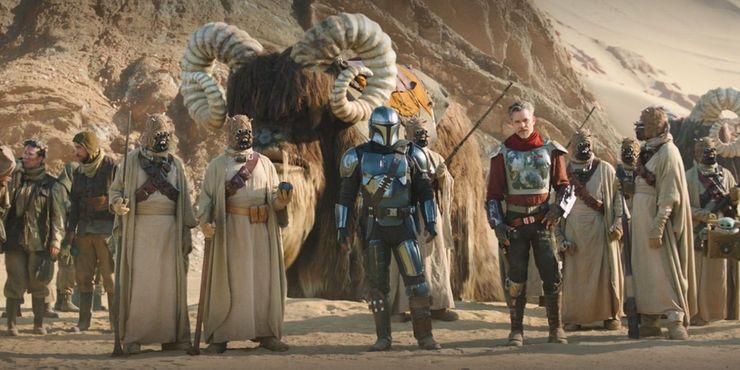 Tusken Raiders reinvented – thanks to an old bounty hunter

In Boba Fett, Star Wars created a villain who was widely loved. Although universally hated for capturing Han Solo and delivering him in carbonite to Jabba the Hutt, Boba Fett was just too cool for fans not to love. He wore great armor, he had great weapons, and had a great ship. And, unlike so many bumbling Star Wars villains, he succeeded where the entire Empire had failed.

It was with no small consternation, then, that Boba Fett was killed off so anticlimactically (and rather clumsily) in the opening act of Return of the Jedi. For years the fan base argued that he could have survived the Sarlacc pit, and as the Skywalker saga turned to the Clone Wars we learned of Boba’s origin as an unaltered clone. Pretty cool, but it still didn’t change his death.

But then Lucasfilm brought us The Book of Boba Fett, and in it the titular bounty hunter finally gets the story he deserves. We see him fight for his life to escape the Sarlacc, hauling himself exhausted out of the pit before being stripped of his armor and left for dead by the Jawas.

And then, just when we think things can’t get worse, one of the most feared species in the Star Wars universe makes an appearance: the Tusken Raiders. But instead of mindless brutes, the Sand People are portrayed as some else. Boba Fett (played brilliantly by Temeura Morrison) eventually becomes part of the tribe, even defending their ancestral claim to the lands against the Pyke Syndicate. The Sand People are suddenly no longer raiders, but a people with a history who want only to defend Tatooine from ruthless outsiders. 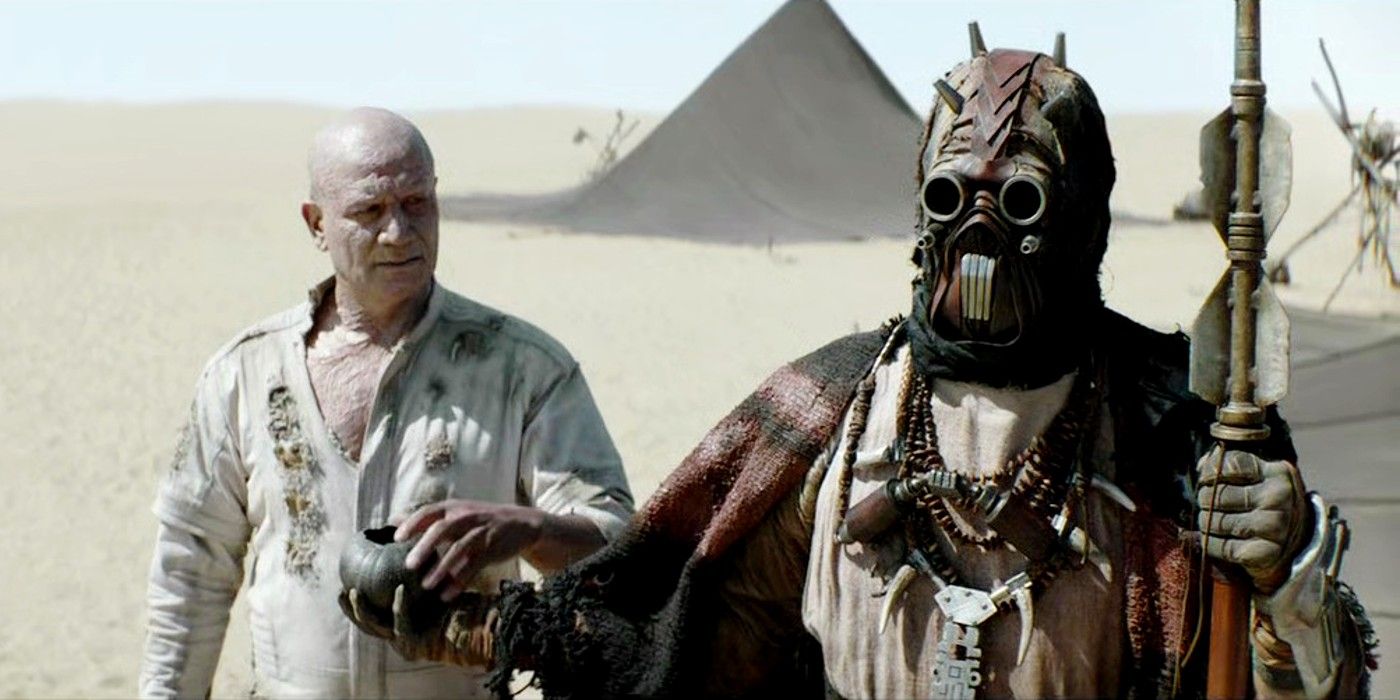 Now, the Tusken Raider is a sympathetic figure: a native of Tatooine leaving in constant fear of attack from off-world raiders, crime lord thugs, local settlers and even bounty hunters. They cared nothing about the Death Star, the Rebellion, or the Jedi – they just wanted to live in peace. Their attack on Luke suddenly seems more justified, and their slaughter by Anakin just another bloody chapter in a long history of conflict. Obi Wan Kenobi certainly respected the Tusken Raiders, but it took Mando and Boba Fett to help us appreciate them. Watching the funeral pyre of Tusken victims burn in the desert sunset was moving, and we shared Boba’s remorse.

The Tusken Raiders have been given new depth and are now a much more interesting species. Here’s hoping we see many more bantha tracks (in single file, of course) in future Star Wars productions.