Attack of the Clones is the worst Star Wars movie (yes it is – I will fight you) but one of its few redeeming features is the sheer number of cool Star Wars elements it introduces to canon. None of them are developed satisfactorily in the movie itself, but it sets the stage for Star Wars: The Clone Wars, the animated movie and epic 7-season TV show that brought this amazing period of Star Wars history to life. A perfect example of this is Jedi Master Shaak Ti. 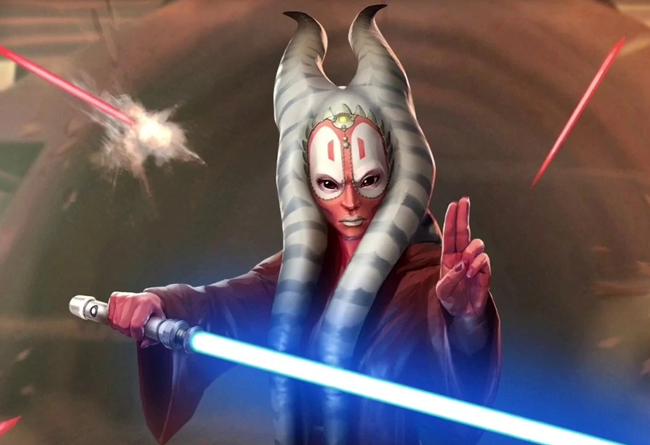 Expanding the galaxy in Star Wars: The Clone Wars

If you haven’t watched the TV series, you might not be familiar with Jedi Master Shaak Ti, or you might just remember her as one of the alien species sitting on the Jedi Council. In the many related Star Wars novels now de-canonized after Disney took over, Shaak Ti is a complete badass – but I’m going to limit my comments to her on-screen adventures.

Consider again Attack of the Clones. Shaak Ti fought in the opening battle of the Clone Wars, a Jedi who arrives at the last moment to rescue Padme Amidala, Obi Wan Kenobi and Anakin Skywalker from the death arena on Geonosis. She makes short work of battle droids with her lightsaber and is among the few survivors who get rescued by the very first clone troopers.

After so many died at the hands of the battle droids at that first Battle of Geonosis (or, for those of you who’ve only seen the movies, the Battle of Geonosis), the Jedi who survive become legends within the order and Shaak Ti is soon elevated to the Jedi Council itself. As a Jedi master on Coruscant she plays a pivotal role in how the early days of the clone wars take shape, but she soon takes on a unique role.

But more on that in a minute. If you’ve only seen the movies you still might not know who Shaak Ti is. Let’s step back a second. Shaak Ti is a togruta, which is one of the coolest-looking species in the Star Wars universe. Shaak Ti is notable for her red and white skin, and of course her massive blue and white head ornaments, called lekku and montrals.

Star Wars gets it right in their portrayal of togruta, showing individuals with a wide variety of skin color, facial markings and lekku styles. Too often science fiction makes members of alien species look almost exactly alike, but the togruta we see in various Star Wars movies and TV episodes look as varied as any broad population of humans. Shaak Ti herself has prominent markings covering much of her face, and seems to hail from a race of particularly long-lekku togruta. 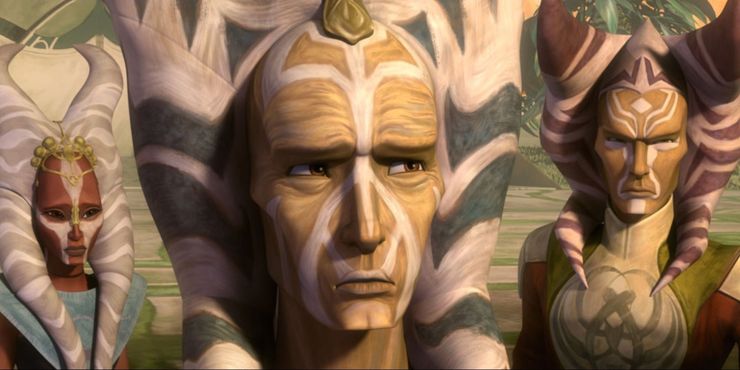 Are Ahsoka and Shaak Ti the same species?

The lekku are probably the most defining characteristic of this species, and because of them we can see clearly that Ahsoka Tano and Shaak Ti are both togruta. Ahsoka has orange skin and more subtle facial markings, but the similarities are clear. They also both come from the planet Shili and were brought to the Jedi temple as younglings to begin their training.

Shaak Ti: The Mother of All Battles

But what distinguishes Shaak Ti from other talented Jedi who fought for the Republic in the Clone Wars? Unlike so many other Jedi, Shaak Ti’s service took place mostly on Kamino, the watery planet where the clone troopers were born, raised and trained. I use these words specifically, because that’s how Shaak Ti saw them. Unlike many in the Republic, Master Shaak Ti saw the clones as individual living beings, not as assets for war.

Shaak Ti was the Jedi general in charge of clone training. We see her mostly in the background for the first few seasons of Star Wars: The Clone Wars, but a pair of powerful episodes to open Season Three give us our first close look at her.

A group of clone cadets, including the fan favorites Fives and Echo, are struggling to pass their final team training run. The drama unfolds, but it’s interesting to see how Shaak Ti reacts to this troublesome team.

She clearly takes her responsibilities seriously, but never once – not in the face of a loudmouth bounty hunter, not when the Kaminoan Prime Minister treats the clones like property, nor when Fives and Echo try seek advantage for themselves – does her demeanor waver. Utterly calm, she assesses every situation and every person with a pragmatism unmoved by emotion or political agenda.

Many Jedi are wise and able to control their emotions, but Shaak Ti is different from the cool disinterest of Luminara Unduli or the haughty professionalism of Ki Adi Mundi. Shaak Ti cares. This gives her a warmth few other members of the Jedi Council are able to muster.

The Battle of Kamino

Not that Shaak Ti’s gentle spirit gets in the way of her using force when necessary. After the flashback episode, The Clone Wars follows up with another Kamino-based story where General Grievous and the Separatists attack the clone training base itself. Shaak Ti stands front and center during that battle, directing the overall Republic defence with unshakable calm.

Leaving the front line heroics and battlefield witticisms to Obi Wan Kenobi and Anakin Skywalker, Shaak Ti instead tracks the battle in the control room alongside clone commanders, combating the ebb and flow of the Separatist droid incursion.

That is, until a group of Separatist droids make their way to the control room itself. Shaak Ti leaps into action, blocking their blaster fire and destroying the threat with brutal use of lightsaber and the Force. If any Kamino-based clones had found their commanding general to be a little too gentle, her deadly effectiveness during the battle would have given them a new appreciation for her.

The Jedi who came closest to knowing

Shaak Ti’s next major role in Star Wars: The Clone Wars is in Season Six, following a troubling incident where the clone trooper Tup executes his Jedi general during a battle. The clones shortly get Tup to the planet Kamino for examination, under the escort of Fives.

The situation gets tense when Fives and the Kaminoan doctor, Nala Se, disagree over how to help Tup. Shaak Ti gets closely involved, though, and in the scenes between Fives and Nala Se we see Shaak Ti get as close to discovering Order 66 as anyone. She knows something is amiss, but her Jedi loyalty to the Republic and its related organizations stops her from taking the necessary next step.

Though Shaak Ti does her best to uncover the truth while still remaining loyal to the Republic, the Jedi Council and Chancellor Palpatine, she can’t piece together the related bits of evidence in time. Knowing how this story eventually plays out, we can see the tragedy of how Shaak Ti was only one or two steps away from figuring out the awful secret of Order 66.

How Does Shaak Ti Die?

A big question in Star Wars fandom regards the nature of Shaak Ti’s death. She’s the “Jedi who died four times.” What in the galaxy does that mean? At least one death comes from Star Wars Legends, and Shaak Ti was a character who had great non-canon adventures in the books. But mostly it refers to deleted scenes from Revenge of the Sith.

Multiple versions of Revenge of the Sith

Like any movie, Revenge of the Sith went through several versions as it was being created, with this scene or that being changed or cut as new versions of the script were produced. Sometimes a new scene would pick up dialog or info originally found in a related but un-made scene. All part of movie-making, but it seems like a lot of cut scenes involved Jedi Master Shaak Ti being killed.

In an early version of the film, the episode on Grievous’ ship depicts Jedi Obi Wan Kenobi and Anakin Skywalker facing off against Grievous as he holds Shaak Ti prisoner. The Separatist general then runs Shaak Ti through with his lightsaber. This version of the story had Shaak Ti defending Chancellor Palpatine on Coruscant but unable to stop the Separatists. But although that scene was filmed, it was never part of the finished episode and therefore doesn’t count. Shaak Ti did not die at the hands of General Grievous.

But there was not one but two times when Shaak Ti died in this movie. A later scene was filmed, this time when Anakin Skywalker, now Darth Vader, has joined the Sith and is killing everyone in the Jedi Temple. Shaak Ti is seen meditating in the dark, then speaking dismissively to Skywalker as he sneaks in and runs her through.

This short episode was also cut from the movie, but it is hinted at in Star Wars: The Clone Wars in a Force vision Yoda experiences, and this fleeting image offers some proof that Shaak Ti’s canon death was at the hands of the new Darth Vader. But we all know that Force visions (especially of the future) are notoriously unreliable, so can this really be considered Shaak Ti’s canon death?

Reports of her death are greatly exaggerated

Could it be that Jedi Master Shaak Ti was one of the few Jedi who escaped Order 66? We know that she was on Coruscant during some of Revenge of the Sith, but she could also have departed for Kamino before Darth Vader attacked the Jedi Temple. Many members of the Jedi Council were scattered across the Republic in those final days and I would think Shaak Ti would have wanted to continue her work with the clones.

Not that Kamino would have been any safer than Coruscant once Palpatine gave the order to kill all the Jedi, and Shaak Ti might have found herself in a very difficult situation if she landed on Kamino following Order 66.

Shaak Ti: the Jedi Master who got away?

Since we have no confirmed, canon moment where Shaak Ti died, we can suppose that she somehow made her escape shortly after the clones turned on their Jedi. We already know that two members of the Jedi Council – Obi Wan and Yoda – managed to escape, so why not a third?

Shaak Ti fought well at the Battle of Geonosis and could easily dispatch droids. We never get to see her matched up against Grievous, but something tells me she could make short work of any Inquisitor or other Imperial agent sent later to hunt the Jedi down.

Leaving Shaak Ti’s fate open gives Star Wars the chance to explore her next chapter or related stories. Perhaps she left a sign for the Council in one of the Jedi outposts scattered across the galaxy before disappearing to do what quiet good she could. And if Star Wars has shown us anything, it’s that lone heroes can make all the difference.